I've been using Realm Works by Lone Wolf Development to manage my games for the past four years, and since my maps are a big part of my gaming my maps need to go into Realm Works as well.

Up until recently it was a bit of a hassle due to RW's limitations being 32-bit software, but thankfully now RW is brought into the modern age (at least on the bit level) with a 64-bit version. So now it can handle reasonably large maps up to 30MB, and 6000px or so in size. The 30MB is a hardcoded limit but the pixel size more of a practical limit that I have figured out the hard way to keep performance reasonably.

After some testing I decided to go for 200 dpi for detailed maps and 150 dpi for larger maps, like oceans. Keeping the images within 6000px means that the 200 pdi maps can cover a maximum of 30x30 inches of the Flanaess map ( the pink square on the image below), and the 150 pdi images can cover 40x40 inches (yellow square). 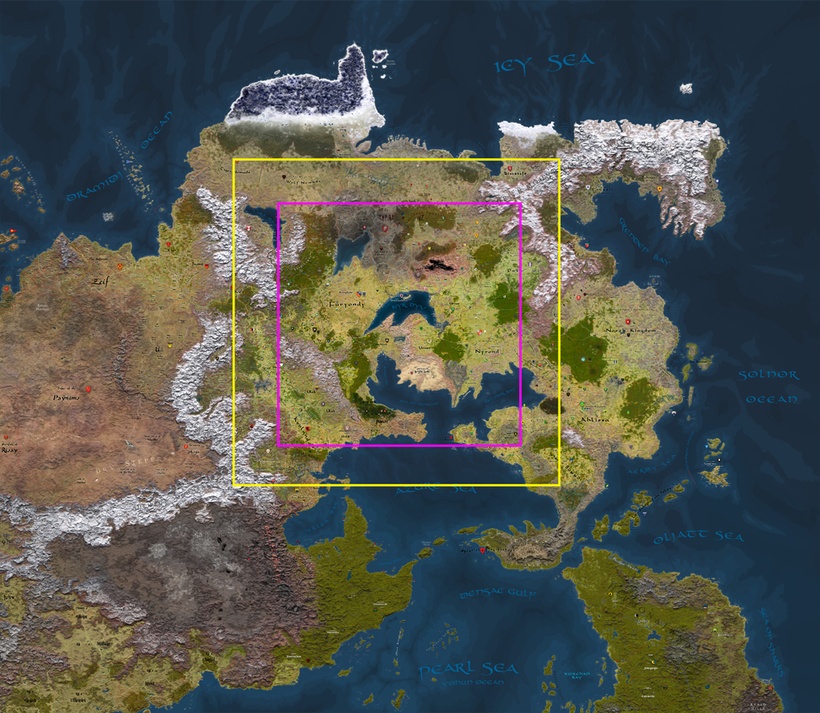 Maps using a 200 dpi export image are not perfect but good enough for referencing things during the game. Below is an example using the Player Map of Ket 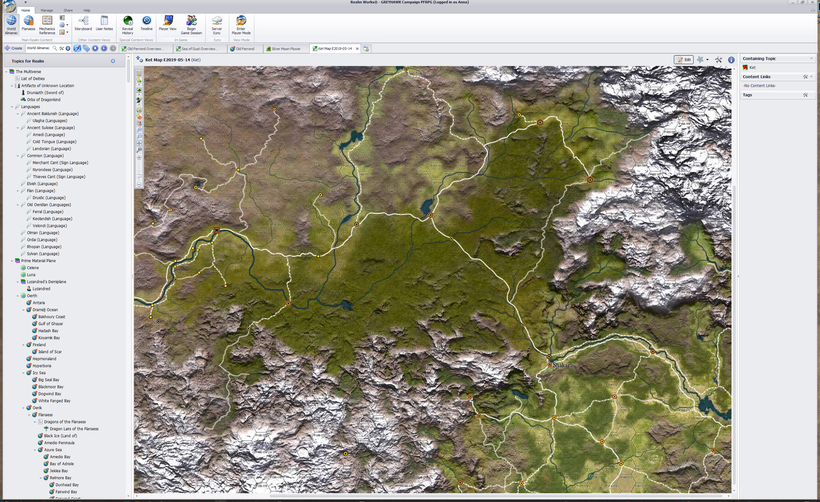 and here is the same area with the DM overlay: 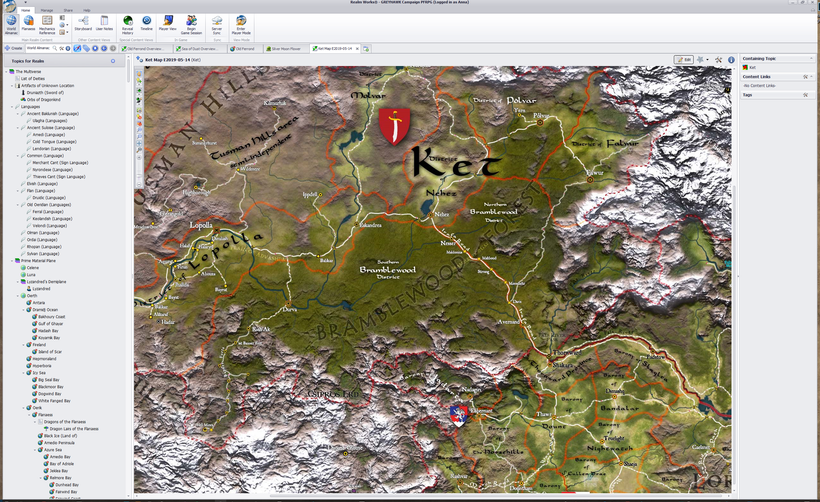 The 150 pdi maps are less pretty but still usable, and will mostly be used for really large areas like the Sea of Dust or oceans. Below is an example of the Icy Sea map: 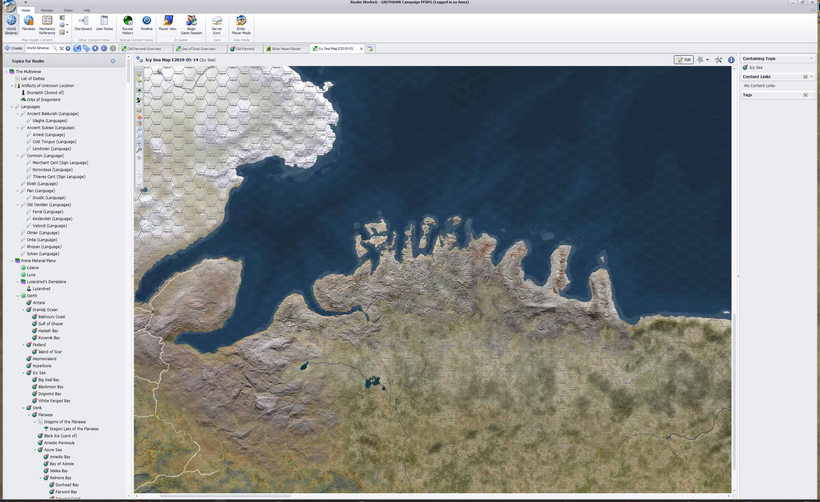 and below with DM's overlay: 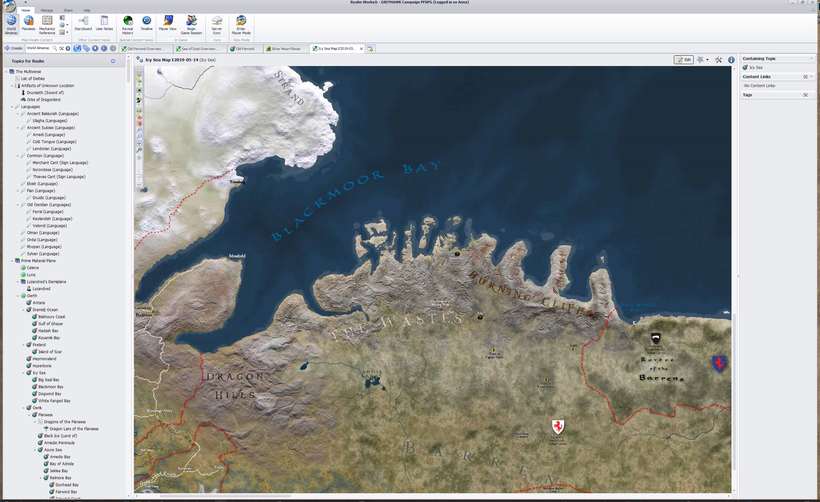 A little tricky to read the fine print, but the main purpose for me is to have a map inside Realm Works that you can put Map Pins on, and that way create a reference in a quick and efficient way.

Pretty maps in Realm Works is great and all, but a key questions are: How easy is it to get them there, and how easy is it to update the maps themselves? In order for this to be useful long term an efficient workflow is needed, and after some fiddling around I think I have a working solution.

Each map used in Realm Works needs to have a set definition that can be used over and over again, so you can update the map inside RW and keep the Map Pins in place. This can either be done by using artboards in Illustrator and then export them as separate images. The sheer number of maps a Flanaess campaign might need (especially mine) will soon overwhelm the artbort limits of 100 in Illustrator, and will not make things easier.

Photoshop to the rescue! Export the whole map at 200 dpi and then use Photoshop to copy as many pieces you like out of the big map. By using the Photoshop vector functions and selections each map cout out can be defined, named and reused for future map upades, creating a matching new version. 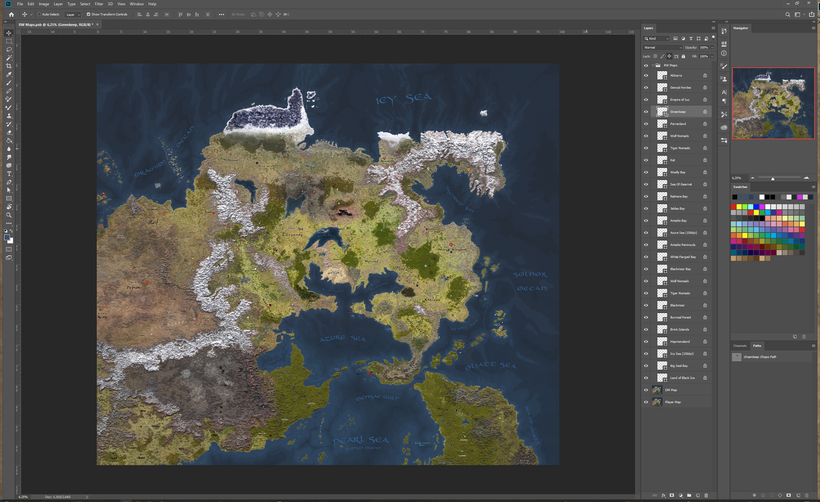 This way you can have an almost unlimited amount of large and small special maps for things like forests, mountains, lakes and rivers as well as the more standard countries. When the Illustrator map is updated only two versions (Player and DM) needs to be exported.

Not a perfect workflow but it will do the job of creating a new set of maps for Realm Works much easier, and it also opens up for some other cool ideas that I'm going to test out when I come back from Paizo Con.

This is not a promoted post  -  but a disclaimer is in order - I volunteer for Lone Wolf Development helping out at conventions, and as a compensation they pay my badge and hotel room.

A full set of maps for Realm Works, that you can of course use outside of Realm Works as well will come as soon as I'm done with the Atlas.