Today is the day to thank all of you for giving me the chance to work on Greyhawk maps a couple days every week, it is a dream coming true and you are the ones making it possible!

Here are a couple of new maps that have been waiting to be seen by others. The first one is a low resolution version of the upcoming Flanaess River map, that will be released as a variant of the upcoming 576 CY map. This version is 7000px across which is still enough to give a good overview of the waterways of the Flanaess. 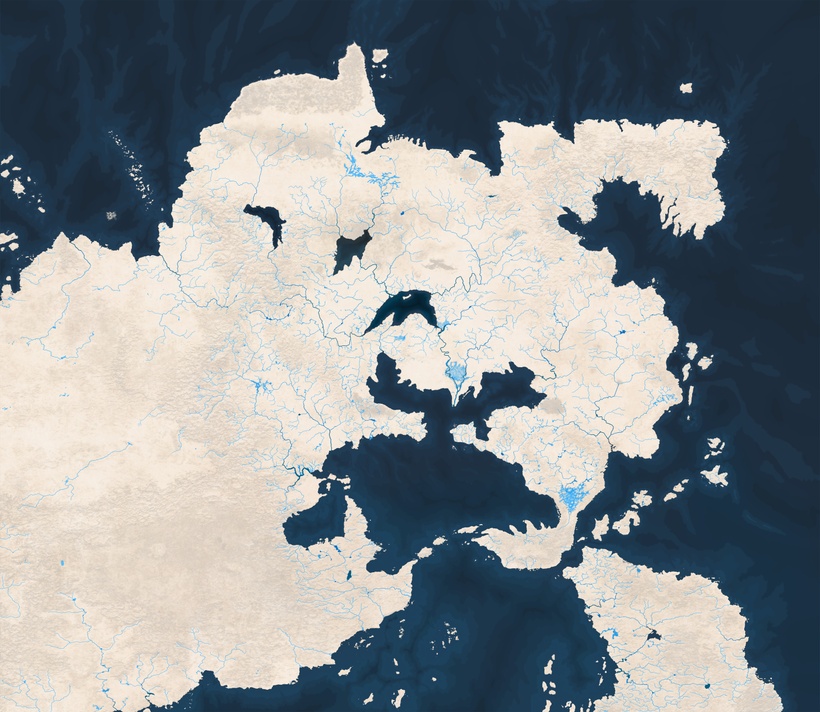 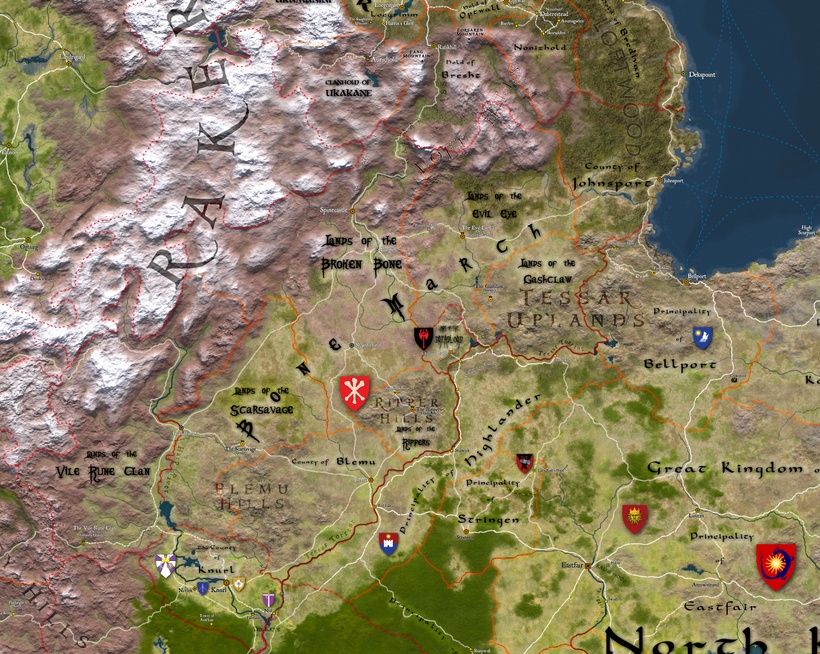 The humanoids still hold the realm and Knurl still exist as an independent realm, but that is doubtful to be much longer. The County of Blemu have pledged allegiance to Spinecastle and is run by a totally corrupt Count backed up by thugs, surviving by being a conduit for the little trade there is with the North Kingdom.

Johnsport have survived  mainly intact, by providing the only port and main contact with the outside world, they can bribe the clan lords to leave them alone most of the time.

Orcs are the most powerful clans and they have grabbed the best bits of land, Spincastle and the central lands, the south western lands to keep an eye on the neighbours and the former County of Cadmil to keep Johnsport in check. The Gnolls and Hobgoblins control the rest.

I've also renamed the Blemu Uplands into the Ripper Hills and (in the north) the Tessar Uplands. I think the two different Blemu highlands where probably just a mistake in the source texts, and this makes more sense to me.

The Clan names comes from the Living Greyhawk Gazetteer. This is part of my work to try and detail the often overlooked evil lands of the Flanaess with a lot more detail and nuance to provide more goodies for adventurers to explore, get bogged to in and ultimately defeat.

Next up is the Horned Lands 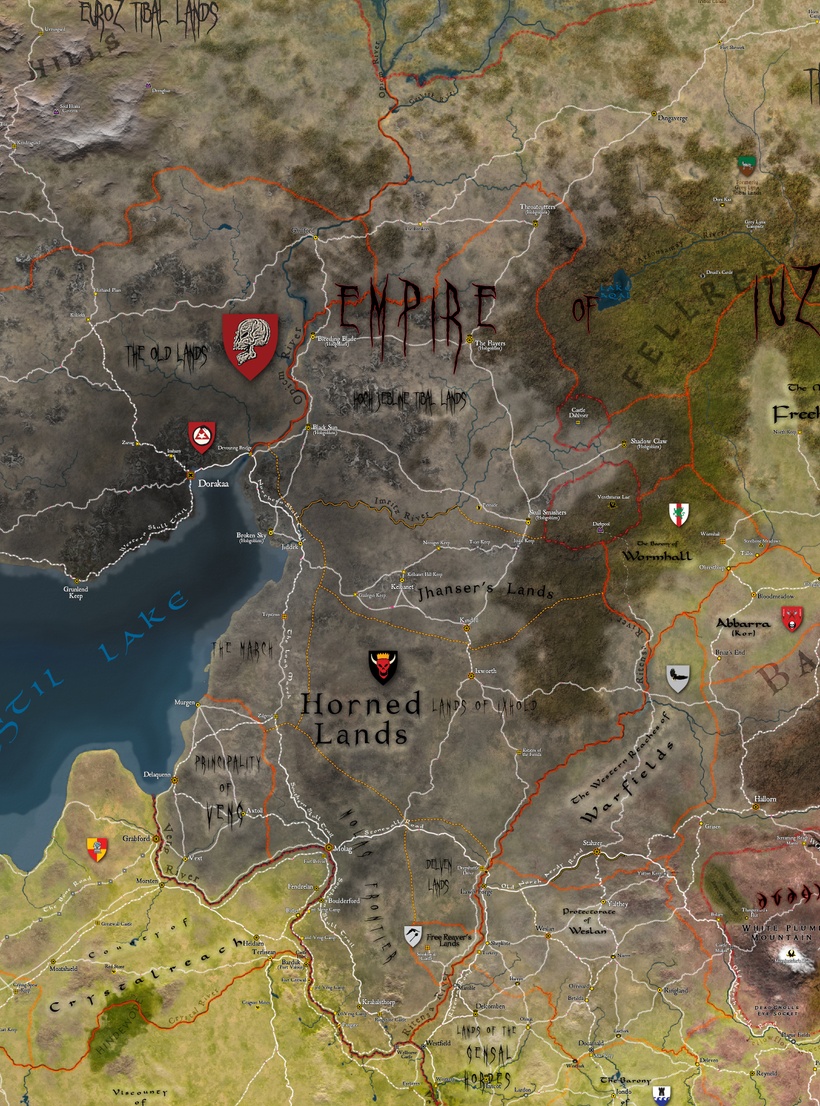 Hre is a link: https://www.dropbox.com/s/gccfwa2rzqrb90l/Horned%20Lands.jpg?dl=0

The Horned Lands (598 CY) are in my campaign one of the core provinces of the Old Empire, as Iuz now call his lands. It is still mostly business as usual run from Molag, but it is Iuz and his Boneheart priests that are in charge.

To control the the Skull Trail and the Long March is key so Veng that sits on the side have been spun off as a separate province run by a thug calling himself prince who can raid across the river and get punished without it affecting the larger empire as much. The Free Reavers have the same position, but are less effective due to geography.

Iuz is much more on the defensive these days, there are no easy pickings any longer, neighbouring realms are now hardened and  have learned to defend themselves. This is especially true of the fanatics in Critwall who are hellbent on taking back territory and killing humanoids.

When pay your troops mainly using loot this is a major problem, so Iuz is shoring up his conquest using a combination of walls, client buffer states and clandestine footwork. It is only partially successful.

North of the Molag frontier are the Lands of Ixhold that now also controlled the lands that belonged to Pazrael. Alliances between demons seldom last long and this is a great example of it. Pazrael grew tired when loot was no longer easy to get and you had to start managed with you got rather than getting more, he was out.

Ixworth has originally a small Flan hold formed by exiles from the Great Kingdom, conveniently located  just outside the interest of the Rauxes even at its peak. After the fall of the Great Kingdom it became a farming community, raising sheep, goats and cattle for export to Molag and got drawn into the affairs of the Hierarchs.

The march is the lands around the key road being controlled by Iuz henchmen from Trystenn. The northern part of the March used to belong to the hobgolins and the Broken Sky clan are still living there.

The Jahnser's Lands are run from the town of Kindell. It was originally an outpost to source humanoid mercenaries run by Kindell, a ruthless and savvy businessman who saw the market for humanoid mercenaries in the Great Kingdoms, for its many wars.   He grew rich and became one of the initial Hierarchs, and to consolidate his hold of the land and protect from the growing power of Iuz he built and number of fortifications north of Kindell.

North of the Imritz river are till the lands of the Hoch Jebli and the clans are still both squabbling among themselves, defending against outsiders and selling themselves for whatever trinkets catching their fancy.

This was a bit of insight into my Greyhawk campaign, and I hope you find it useful as an inspiration in your games. Thank you again for joining me in mapping the World of Greyhawk!