The title image for this post is for a presentation I held at StrategiCon in Los Angeles back in 2013. It was the first time I presented my then barely finished Flanaess Map for an audience of 6 people, and only two of them had even heard of Greyhawk and was as far away from a success as you could get. Which is a good reminder to one trying to get into a creative career, don't let a bad experience let you down. Keep at it, improve and find the right audience!

What I showed back then, apart from the Flanaess map that are now widely spread, was my first efforts to turn it into a 3D world. Below is the Valley of the Mage and the Dim forest in a first 3D test conversion. 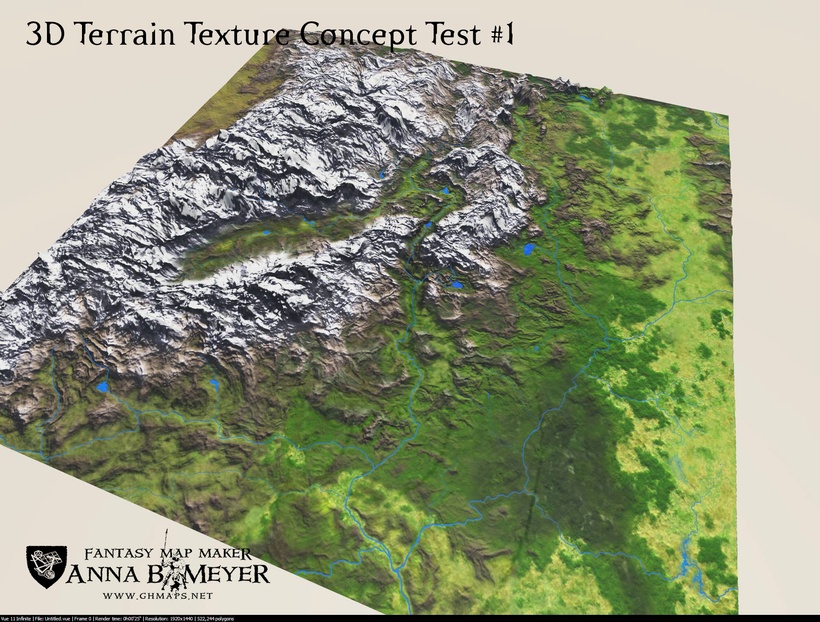 It didn't impress anyone in the room, and I don't blame them, it was before its time. Now seven years later technology and gaming culture have changed and we use stuff like this in our everyday life as well as to help us make our games more immersive. I also needed this time to better understand what I'm doing and how to best go about creating better maps for RGP's.

The current Flanaess map is created mainly using the tools available in the 1990's, and the only thing that that I have done to it that have made real use of the new powerful tools of today is to make it into one big map. The irony with that is that its now more difficult to print and use on paper, which is a problem. My goal have bee to create the best possible map to help myself and all other Greyhawk fans run our games better, and so far the old map have been doing an OK job, and most of my effort have been on the research side adding to and correcting the features of the map. With the 576 CY map I feel that now the time has come to shift gears, away from the content to presentation and underlying cartographic technology. It is time to move from the 1990's to the 2020's!

This transition began for me in 2009 when I started using Vue to work on making the Flanaess map in proper 3D, and four years later I had created a set of images as the one above. It looks cool but its not really useful, and it took forever to create. I knew I was onto something and kept on trying new tools and trying to figure out how to use them to visualize a fantasy world. World Machine became a huge stepping stone that made me take a huge leap forward, and with it I have created some great maps of Midgard and other settings, and it is still my go to application for the job. It is far from effective and easy to use, and hopefully will be replaced by Gaea from Quadspinner very soon, more on that in future blog posts.

Creating the map is only the first part of the equation, usability, "tweakability" are more important in the long run. My current Flanaess map looks cool, but in order to make your own version you need Adobe Illustrator which is costly and difficult to use. There are also no metadata associated with the map, you can't extract a list of the settlements of find out how long is the road between Greyhawk and Dyvers for example. Modern map technology can do all that and much more, it is time to bring Greyhawk to this world of amazing possibilities. 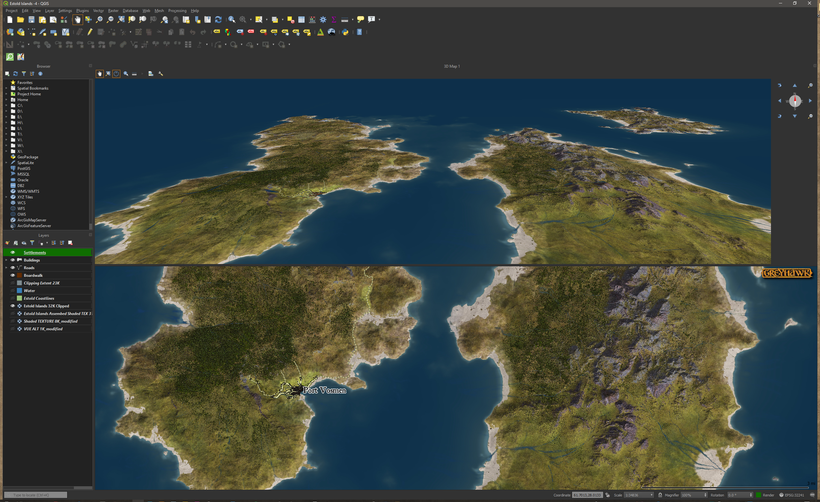 Above is a screenshot of QGIS an Open Source GIS (Geographical Information System) application, and I've loaded the Estold Islands that I created a couple of years ago as a test area. At its core it is an information management tool, you select the information you want to work with, tweak the style to what you need and then either look at it on the app or package it to the format you want to publish the map in. Maps can be published for print, digital images, online practically every way possible.

Painting maps the artistic way I've been doing makes them look cool, but the information can't be reused and the look of the map can't be easily changed. Using GIS technology you get a whole lot of information "for free". Below is an example where you can see the length of a road, information that is derived automatically since QGIS can derive the true distance. 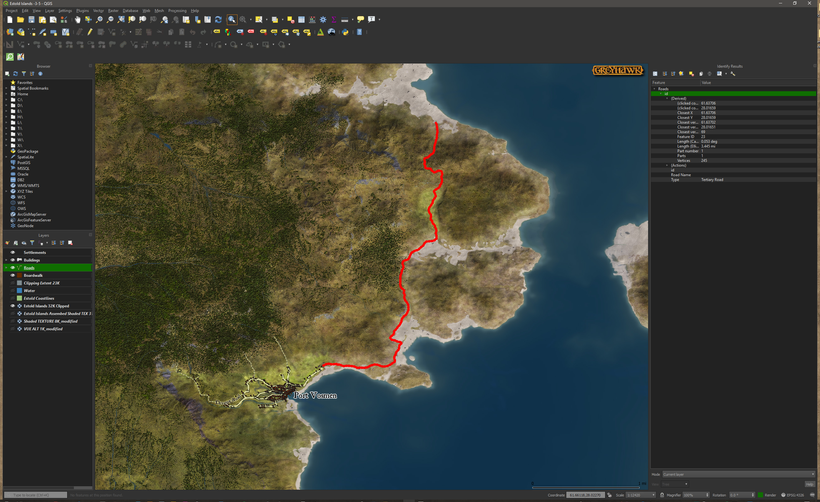 If you enter information about objects QGIS can label them automatically, like with Street names. Note the scale bar bottom right which is handy if you use the QGIS on the fly. I couldn't resist adding a Greyhawk logo just to feel a bit more at home! 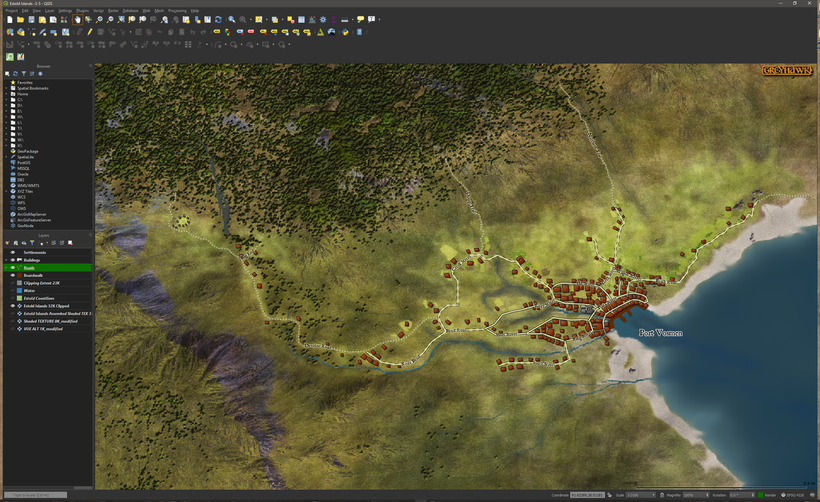 I need to stress that this is one of my very first projects in QGIS and more of a technology test and far from a finished polished map. I've been playing around with QGIS for about 6 months using real world example data, and this is my first fantasy test project and this took me about 5 hours to create. It bodes well, if a beginner can create something this good in a few hours, with experience and premade styles it can be done in a few minutes.

Another advantage of entering metadata when you add things to the map is that you can export all that data afterwards, as a list of all the streets in the town for instance. 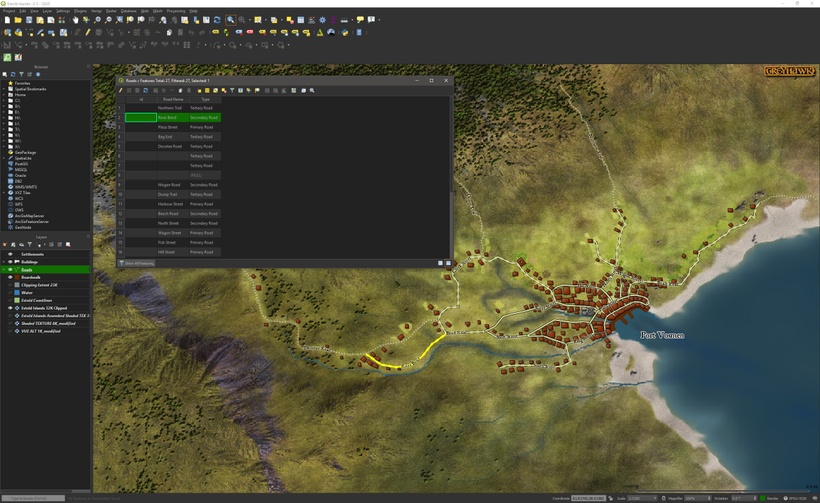 And you can also store links to more information and even build a database connection, the possibilities are endless so over time you get more and more out of the same data. It is not only small scale maps, large scale maps covering the whole planet can be made, and you can add local data if you want since everything is placed in the world. 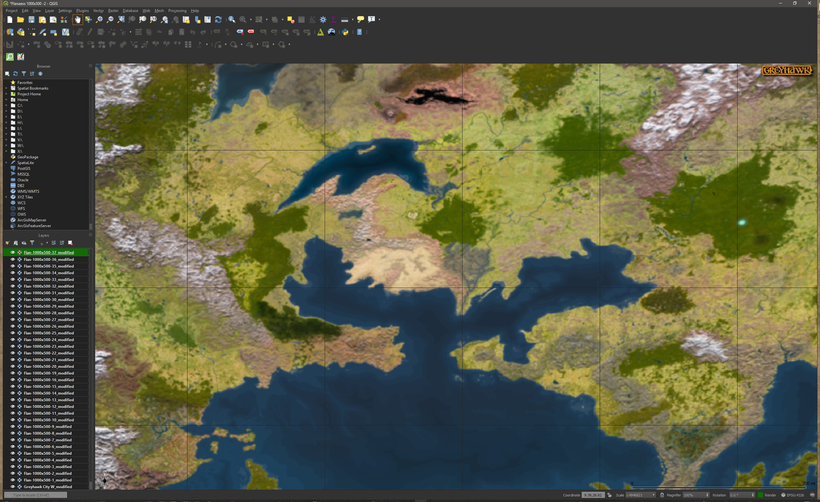 Below is a low res setup of the Flanaess placed on Oerth, and I added a 10 degree grid, which is square due to the projection used. I'll create Ortho projections so we can see where things really are located, below are a first test. 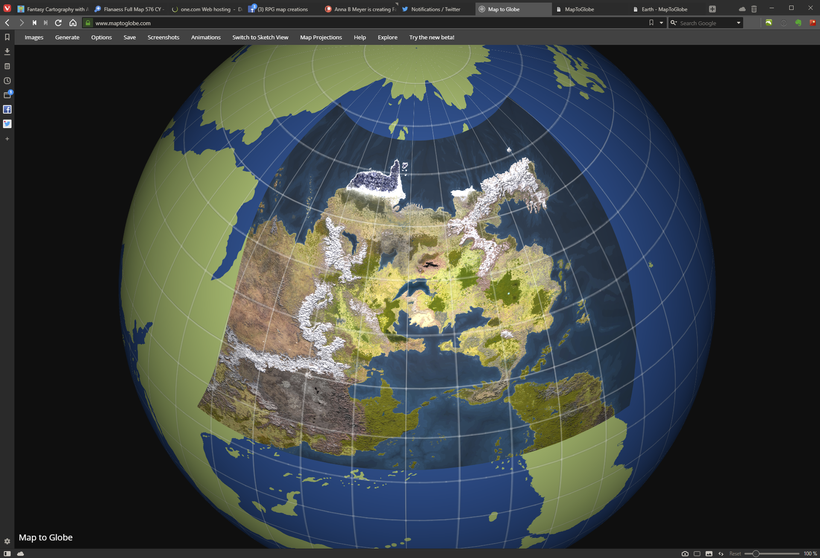 I have now figured out that the latitude references of Rauxes and Greyhawk mentioned in sources doesn't seem match well with the published maps. Rauxes is placed much further north on the map that is is said to be in the written sources, and in this case I will go with the looks of the map. Normally I'll try to follow the written word more than maps and images, but in this case I want to preserve the shape of the Flanaess we have come to get use to and love from the maps, Rauxes have to move a bit north and we can have the map we are used to.

Also remember that all this is raw screenshots without any post touch up editing, with some cool tricks you can also tweak things to look a lot more "in-game fantasy",the image  below is from a Swedish QGIS user who creates maps in an "pseudo-historic" style using modern data. 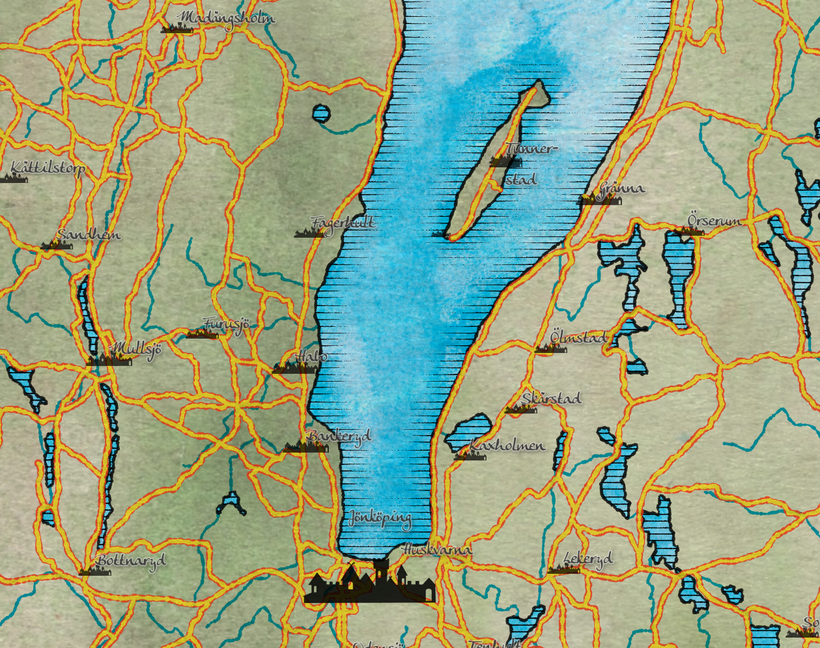 Exporting the layers of data separate into Photoshop means that a much more polished and refined look can be obtained. Instead of using exported pre-made maps, anyone willing to devote a bit of time (no money needed since QGIS is free) and learn the basics and use the application itself as a map service. This opens up lots of possibilities, like looking at both a top down and 3D view to better understand an area like in the image below. 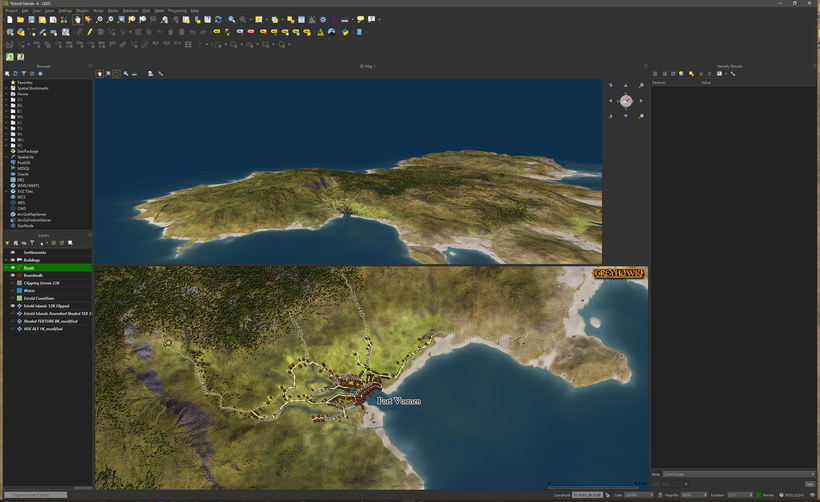 Remember, this is just a first example of what a small set of data can accomplish. With months of work maps of superb detail and versatility can be created, and with QGIS being a free application, anyone can teach themselves to add or change things to make it suit their own campaign. Political, religious, an all sorts of information can be added and used together with existing maps. Historic maps will be much less of a pain to create or edit. The next major version of my Flanaess map will most likely not be made using Illustrator, it will be a bunch of GIS  data that can be used, published or personalized instead of only coming as a fixed JPG or PDF.

For those of you who are interested in knowing more about QGIS you can find it at:  https://www.qgis.org/en/site/

Data, and how to do this will be coming to Cartographer Tier members as my work progress. This is a game changer!

This is a sneak peak of one of the main topics of my Cartography Seminar at  Gary Con XII. I hope to have a chance to meet many of you there, and again a HUGE thank you for making it possible for me to invest the time to learn this and go to Lake Geneva!! 🙂