Mapping Shield Lands for my Campaign

Its been almost two years since I run my last Greyhawk game which is way too long, and plans for a new campaign is underway. Being passionate about maps and having them playing a key role I want my next campaign to make use of maps to present the area of the campaign in rally high detail, and elevate the surroundings from backdrop to be treated more like a mega dungeon without walls or roof. 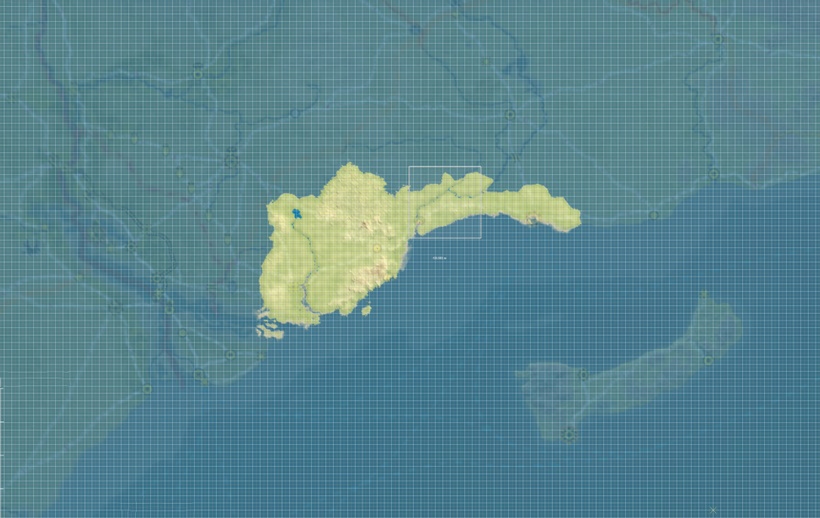 The area I've chosen for my next campaign is southern Shield Lands, or what used to be Shield Lands before the Greyhawk Wars. Adventuring will start in the winter of 598 CY - 599 CY and a post war reality have been around for some time. The characters will start in the village of Auldet placed in the low Serion Hills near the cost of Nyr Dyv along the old Aerdy road from Radigast City to Critwall. The first stages of the campaign will be set in the area between Critwall, Axeport and Gensal as life in Auldet is torn into the power struggle between the rulers of these places and other outside interests. 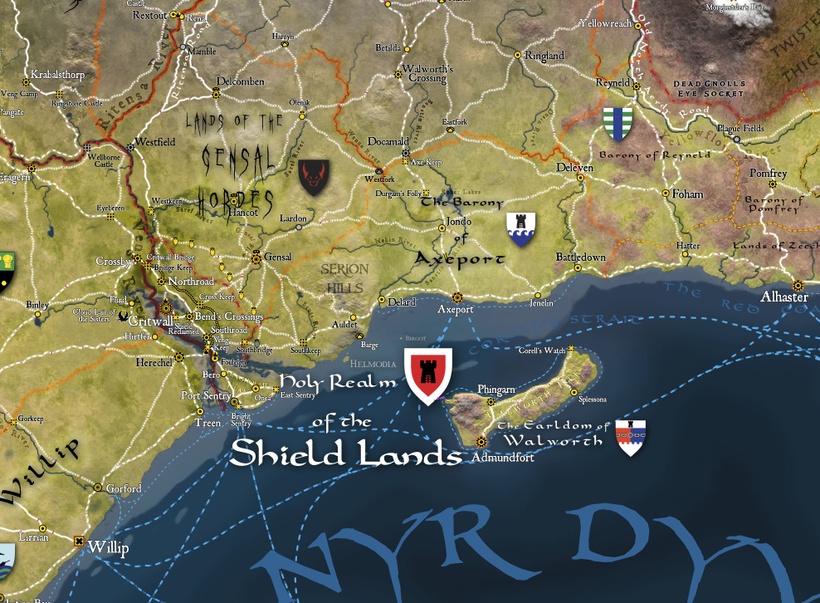 So I need a map  that covers an area roughly 100 x 100 miles, showing all the necessary detail for an in depth sandbox style game play, at a resolution of 5 ft per pixel this means a map 100,000 pixels across. Large area fantasy terrain maps this detailed have been a tantalizing but impossible dream, until now. A new generation terrain tools and powerful computing become more affordable means I will be able to make use of the skills I've acquired mapping Midgard and other settings the last 5 years. 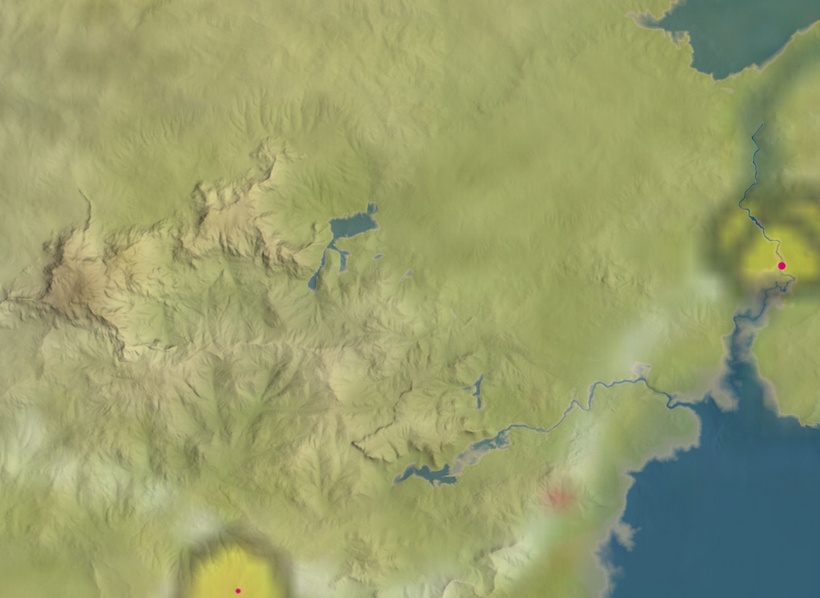 This project will require the use of an whole range of tools like World Machine, Gaea, Photoshop, QGIS, Illustrator and they will all be needed for this project.

My goals are to:

The first part of this is to do the terrain modeling which will be done in World Machine. It is the only tool that at the moment to support terrain and river creation in this much detail over an area this big. My work on Lendore Isle and Ratik that have only been partly successful have taught me that you need to work in stages to get the quality high enough. One of the biggest problems when you work with 3D creation software is the see what you're doing. When you work in CAD and accuracy is key that limitation is not too much of a problem, but when your work is more creative and it is the look and feel of things that are key it is a severe limitation. There are workarounds that helps a bit and work in stages, creating major features first and export the data. Then import the data again, adjust and add the fine details.  Fractals are fickle and with this level of complexity results vary each time to calculate, especially when using preview shortcuts.  By using already rendered data you can work on a sable terrain when you add details and work on the texturing. Below is how much of the area that I have ready for the next step. 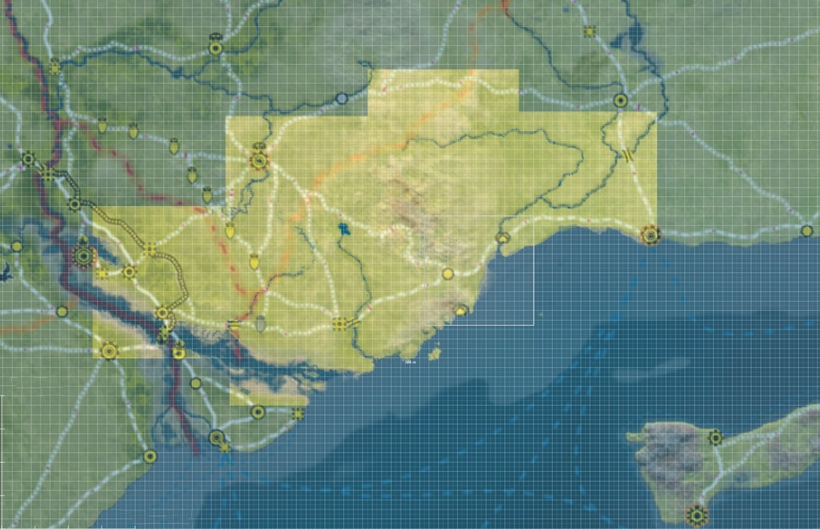 The drawback with this method is that you need lots of memory to hold all the data you need to work with. My computer has 128GB of RAM and can barely handle the whole 100 x 100 mile area, so I'm plan to upgrade to a computer with at least twice as much RAM later this year. Having a lot more CPU, faster storage will also speed things up a lot. Its not only on the hardware side of things that there are progress, new software also makes it possible to work with larger data sets more effectively. Better tiling, parallel processing than make better use of the many cores of new CPU's and the massive calculation capacities of the latest GPU's. Combine this with GIS (Geographical Information Systems) and Game Engines, database technology and we can look forward to some awesome tools to visualize and keep track of our future gaming. What have been the domain of computer gaming is now becoming powerful enough to be of real use for us tabletop gamers as well.
The main hurdle still to be addressed for DM's who want to make use if this in their games is the enormous difficulty editing it to make it usable in your games. My current Flanaess map requires Adobe Illustrator and a fair bit of knowledge on how to use it, this needs to be made easier. This is my major long term goal, to try and makes the content I create easier to use and adapt as needed by each user. I have many ideas for how to try and make it happen, but now I'm getting sidetracked a bit too much so more about this topic later.

For landscapes to be both interesting and believable they need to have evidence of water, the exception being dry planets and unnaturally dry areas that have never experienced significant rainfall. Most fantasy worlds are full of life, and the water that sustains it which means a system of lakes and rivers, that in most cases transport the water to the ocean. The biggest rivers and lakes of the Flanaess where already on the Darlene map, and I added to that on my Flanaess map. All in all that means that the the biggest rivers are already mapped in low detail. The vast amount of small water ways and lakes are still to be added. When it comes to lakes there are areas that should have more mid size lakes, so expect more lakes in the wetter areas.

Below is an image showing the river system west of Delard and the Santin River estuary with a bit of the Nyr Dyv shoreline veering south west. It is very much a work in progress and not properly textured yet, only simple colors to help me get the small rivers and lakes in place. The area covered is roughly 5 miles across. I've added several small lakes a that are up to about a quarter mile or so in size and started to put in the creeks connecting them. There will be more little rivers/creeks added to connect this water system to the Nyr Dyv and not all of the harsh blue colored areas will be lakes and rivers, some will be wetlands of various type. 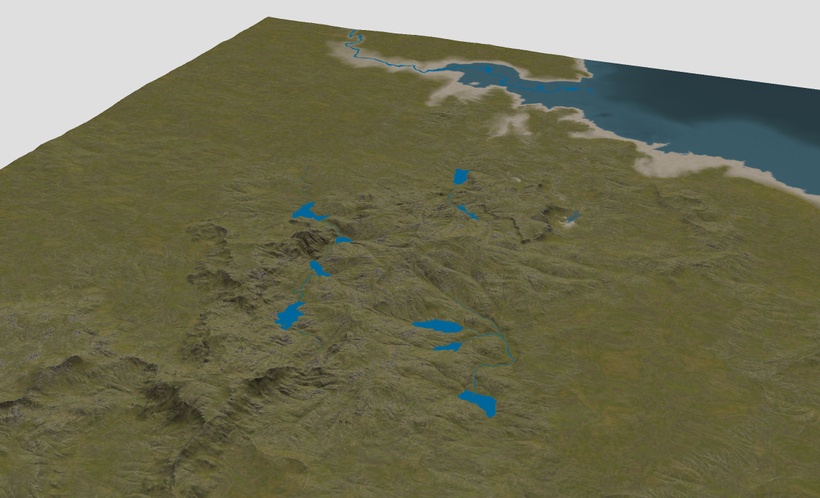 Below is an earlier version of the same area with a river and wetlands that got lost to some fickle fractal change when I  exported it. My current Flanaess map is overlaid for reference which give you s clue to how much more detail I'm trying to create. 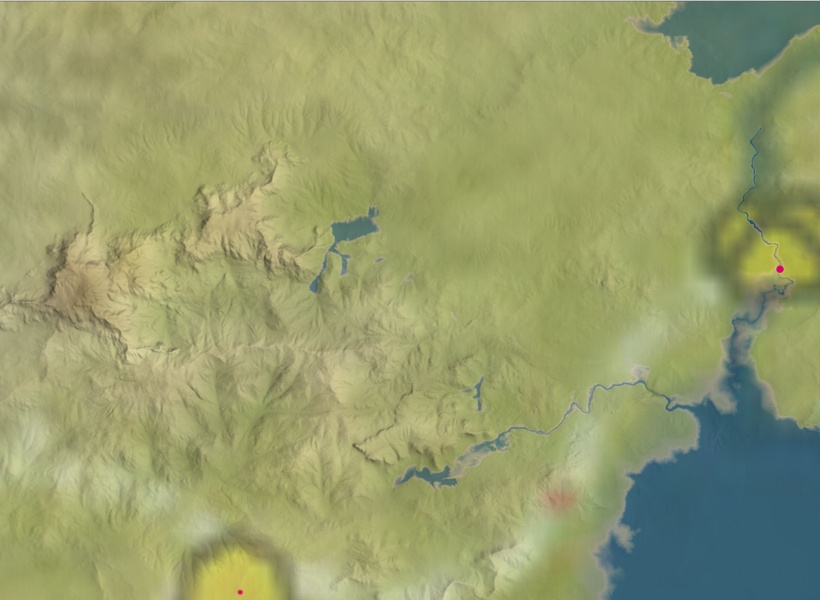 Next is a first study of the area around Barge a little hamlet in a small bay along a hilly part of the coast. The name comes from the frequent Rhenee visits especially in winter months where the secluded location gives good protection from cold winds. Again this is a work in progress image that is not properly textured and lack creeks and vegetation. It is just the elevation data with a bit of a pleasing coloration on top, but it is looking very promising. 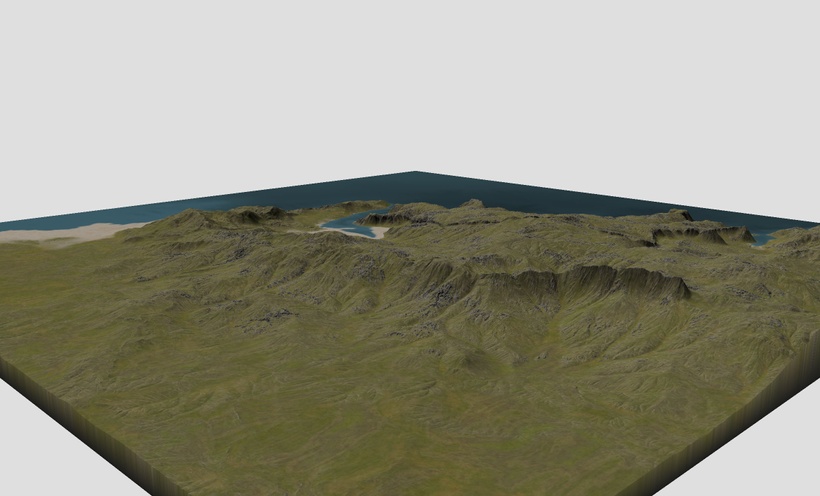 Promo 6
Next is a couple of square miles of the Serion Hills terrain top down sample. Again not proper texturing, just a quick and dirty placeholder texture. But the detail is good and the variation OK, with heaps of boulders and rocks in various places. With creeks, vegetation and proper texturing I think it will be a great outdoor adventuring map. 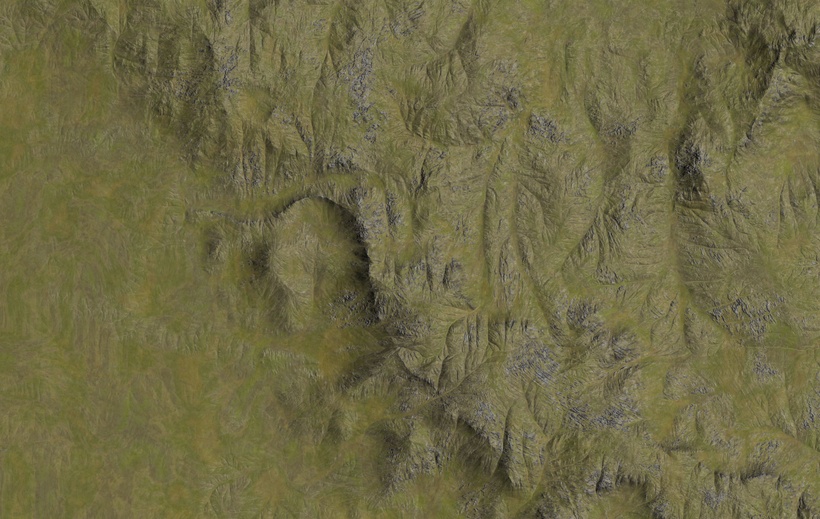 Lets end this first look at my Shield Lands Campaign map project with a couple of overviews. The first one is top down preview of the base elevation model before stage 1 export. This whole area are only 150 pixels across on my existing Flanaess map, this preview is 10 times more detailed. 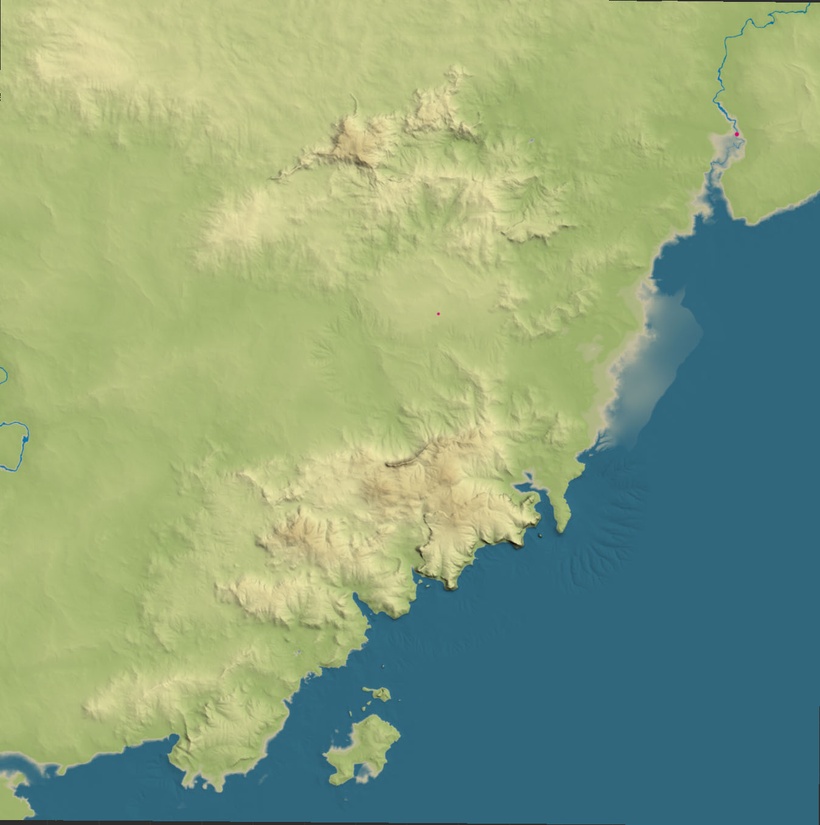 and a second one showing the elevation.

Work on this map will continue a day a week, with work on creeks and lakes next. I'll post updates showing the progress and going into the detail of how things are made. Next installment will be a look at the stage 1 Base Terrain setup in world Machine. I just need to organize the file enough so it understandable.

I hope to present the first finished part of the map around the village of Auldet for Greyhawk Con in October. It will be one topic in my Campaign seminar on Friday October 2nd on the Lord Gosumba Twitch channel.

Thank you much for your support, giving me the chance to delve deep into Greyhawk. Tomorrow I'll start the Atlas project back up again!