I hope you are all well, staying as safe as possible and have the chance to to some gaming (safely online that is). After a three year hiatus I'm getting back into the DM saddle, and for the first time trying to do it online. I've been a player in lots of games using VTT or theater of the mind for years, but never run any games using the new fancy tools yet. My goals for this campaign are:

My new campaign will be set in what used to be the Southern Shield Lands in 598 CY, starting in a small village of Auldet, which is located on the road between Critwall and Axeport in the Southern Serion hills. The area had been under Iuz occupation for well over a decade and the atrocities of the war have gradually faded into history, the few survivors of Auldet have been enduring a bleak existence in this borderland of the Old Empire, mostly forgotten by the Old One and his most powerful henchmen's. This is my version of the history of Auldet, a settlement I made up trying to weave it into the stories of the land from a wide variety of sources.

Auldet had its beginnings many centuries ago as a small Flan stronghold in the hills, the plateau between the Northern and Southern Serion Hills offer a good location for anyone who wants to keep an eye on the surrounding lands and have a fairly easy travel both east and west. The population grew slowly but steadily to around a hundred and Auldet became a little town. This rural life came and went over many years under various Flan lords who ruled over larger or smaller parts of these lands. Some of them where more benevolent and some where incredibly cruel, even the Horned Ones ruled over the area at more then one point. The Old Faith was strong, and it still present if you listen for the faint whispers of look for the hidden markers only the people of the faith understand. 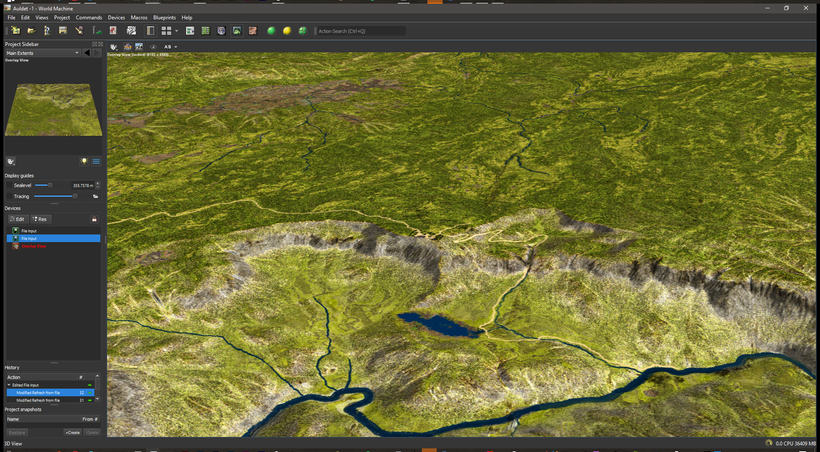 Then came the Aerdy and things where never the same again. They came from the east and the then fast growing Great Kingdom, with settlers and soldiers eager for land to conquer and settle. The grassy and mostly barren plains of the northern Nyr Dyv shores made the expansion quick and old Flan keeps that was half forgotten was subjugated mostly without much of a struggle. They set up a major camp in the Flan hill fort on the eastern shore of the Veng and started to turn it into the city of Critwall. Along the road from the old lands of the Aerdy to Critwall the settlement of Auldet got a new lease of life as a stop over providing shelter, nourishment and a bit of entertainment for tired travelers. A large Inn was built next to the old keep that got an upgrade to house enough soldiers to make sure local thugs and other threats could be dealt with.

The power of the Great Kingdom's lances reached far enough north of Auldet to make it a safe and dull place, mostly known for being a place with great vistas, good mutton and excellent mead. Poor soils on the rocky plateau made it best suitable for goat keeping, and the meadows variety of wild flowers made it perfect for beekeeping, produced an superb honey. Even the dissolution of the Empire came and went without much drama in Auldet. Ferrond declared its independence from Rauxes but the leadership in Critwall dithered and the lands around Auldet existed in uncertainty for some time, but outright hostilities was thankfully still far way. The signs of the knights protectors and Rauxes gradually changed into local variants and then the Knights of Holy Shielding was formed, and they crest was proudly hung on both the Auldet keep and the Inn in 325 CY several decades after the formation of the order.

There they hung in peace for one hundred and five years until the dreadful turmoil of the affairs surrounding the Hand and Eye of Vecna and Lord Halmardar the Cruel himself showed up with a posse of over two hundred men and took control of the town by killing anyone who made the slightest resistance. His terror was short lived (relatively speaking) and Auldet's role as a border keep was over when the Knight of the Shield took back control of Auldet ten years later showing very little mercy towards Halmadar's men who guarded it. Auldet was now effectively only a village again with only a handful of survivors of Halmardar's reign, but the crests of the Holy Shield was back up again.

Auldet regained its dull existence as a settlements faraway from the hustle and bustle of urban life, but it never regained its former size and glory from the days as road garrison of the Great Kingdom. It was yet again a great place to raise goats, keep bees and enjoy the great open sky vistas of the Serion Hills. The geography around Auldet make it possible to enjoy both sun rises and sunsets large parts of the year, making it an excellent place to celebrate spring and fall solstices. The Flan traditions where still strong in the area, strong enough to keep the Heirarchs of Horned Society to advance far enough south to threat the peace of Auldet. Yet again had the now venerable settlement stayed out of trouble, but that would not be the case for long. In 584 CY only a year or so after the Horned Ones have fled the Old One's hordes of men humanoids and demons attacked and laid siege to Critwall. Auldet was yet again far enough away to not be directly in the line of fire until almost two years later when the last knights fled the area to regroup and hopefully come back another day.

In 586 CY Iuz surrounded Auldet, demanded conditional surrender of everyone inside waited an unusual long time of an hour before they went in. What happened then only Iuz men and beasts would know, and only they were alive that evening. A bonfire was lit and the victors enjoyed the pickings literary off the bones of the slain. Thus ended an era of Auldet as a settlement of the Shield Lands.

In the years since a new Auldet have slowly come back to life, and now over a decade later it is run by the Old One's priests who rule over a hodgepodge of surviving refugees and a few inhabitants born there after the war. The Iuzians are there for very much the same reasons the Flan were almost a millennia ago, to control the area and keep en eye on the road. This time not to help the travelers much, there are still few, but those few can either provide some good coin or become forced to settle and make sure the priest have enough manpower for a decent standard of living. Even the worst of the old ones servants need to eat and help with maintaining the Lord of Deceit, Pain, Oppression, and Evil's power of the world. The only relief for the inhabitants is that they are now so few that they are all needed and there are few others to enslave.

The Knights in Critwall have grown in strength and the battle-hardened survivors of the war have now trained a new generation of young fighters eager to prove they are better that the previous. they have now become a beacon for young adventurous folk from near and far, offering a full belly, sword, armor and glory!

This was the history of Auldet, to be continued....

Thank you so much everyone for making this possible!