I have now started my campaign and is back in the DM saddle again after a hiatus for three years and here is a closer look at the starting point for my campaign, the village of Auldet.

First a series of terrain shots, looking at how the village is placed in the countryside. 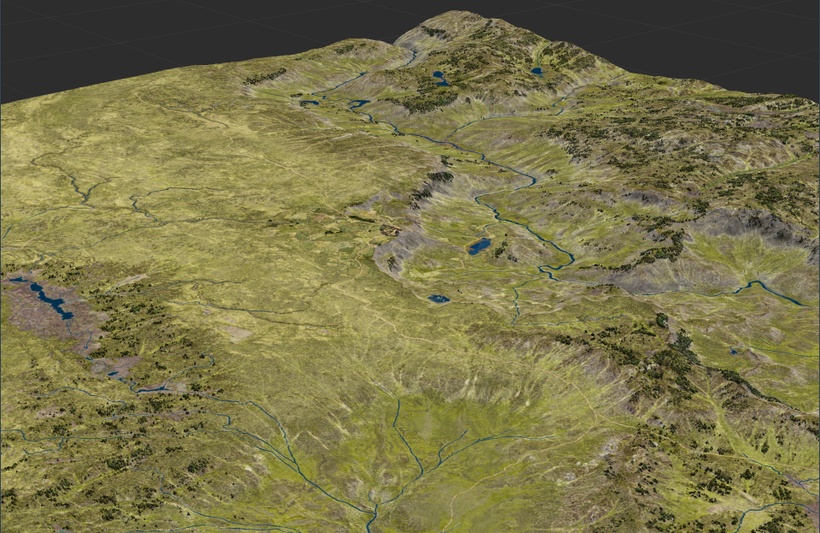 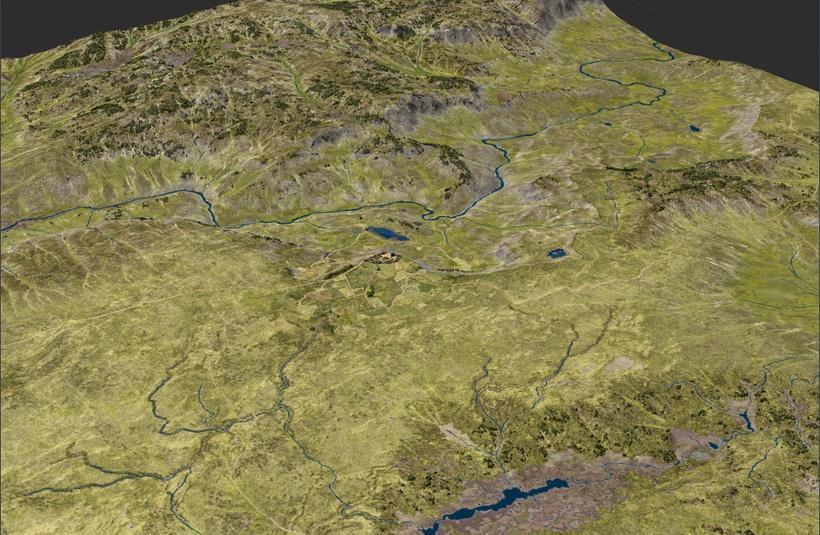 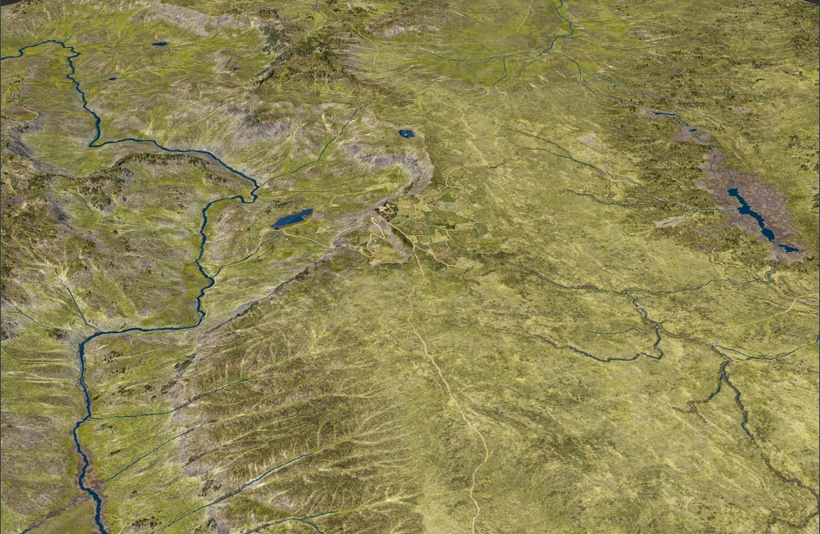 And the top down area map. 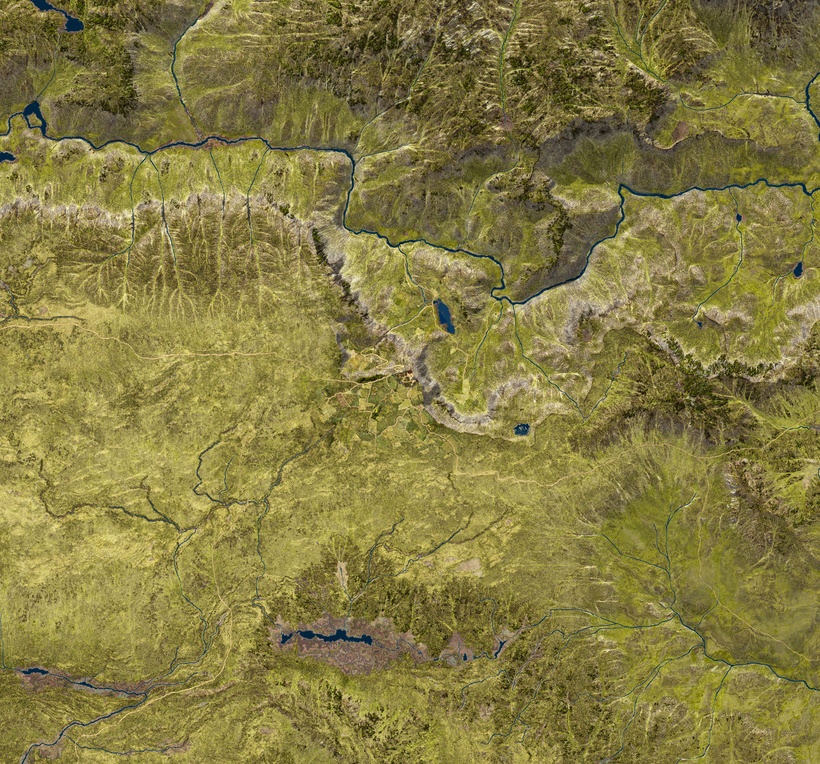 And a elevation overview 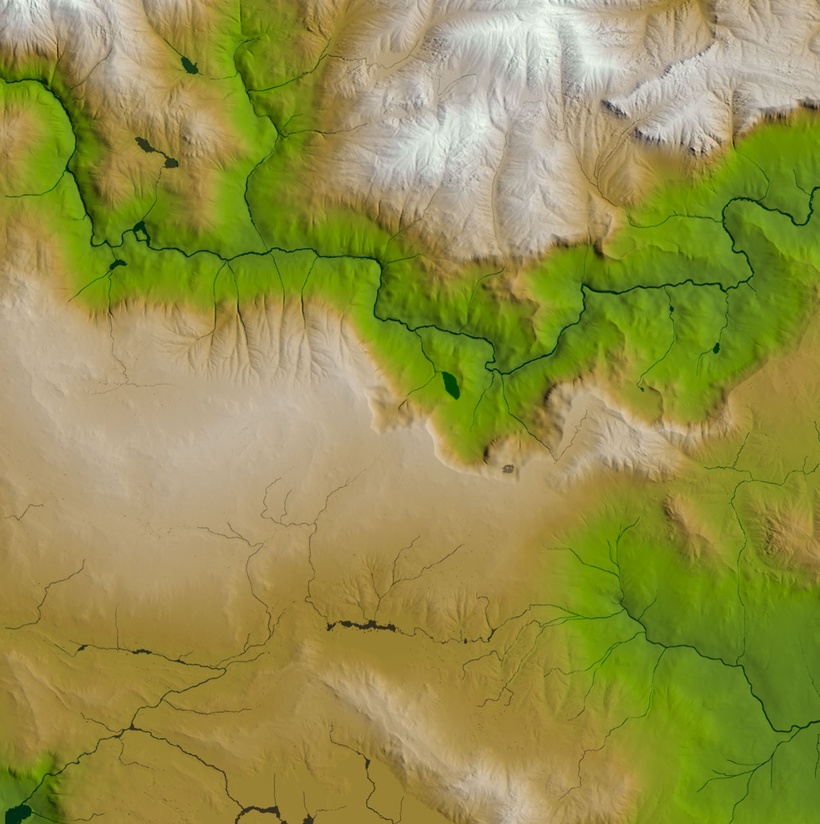 And a closer look at the village 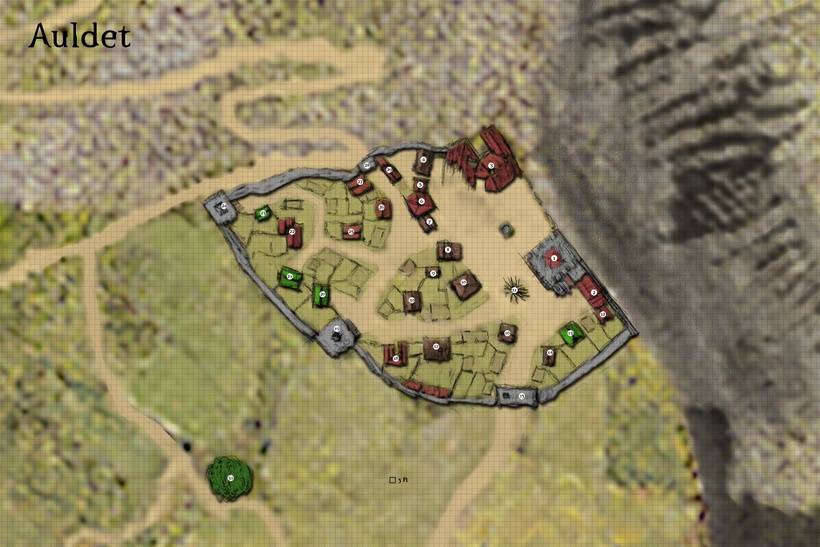 1. Auldet Main Keep the "Old House". The oldest building in the village and now the seat of power for the Iuz priests, "The Eldermen". Senior among the Iuzian priests are currently Kirshenk.

3. Half Roof Inn, the once rather impressive in is now half ruined. It lost most of its western part when the Iuzians attacked. Now is as serves Auldet’s watering hole and gathering place. It has been restored to usable standard the last two years, but a major part is still only a ruin. No one seems to remember what the original name of the place was. It used to have a stable and a large part of its western wing are now a ruin, and a makeshift wall and roof covers the hole.

4. Old Brewery. It is also in a bad shape since the stable that used to be between the brewery and the Inn totally collapsed. Albetin the Inn keeper have managed to start a limited production of mead and cheap ale.

5. This house use to house the laborers of the inn and the brewery and is now mostly empty

6. The Mill. It used to be a small windmill on top but that is now history and the millstones are now turned by muscle power human or beast.

7. The keeper's house. This house was once the office for the servant collecting fees and taxes from travelers and villagers worked and lived. It is situated at a central location to make it easy too see what is going on. Now its mainly empty, the Iuzians am more keen of controlling from the keeps and the walls.

9. A woman named Leneda used to live here. She was was hateful and difficult to deal with and most villages made sure to stay away from her. No one have seen her since last summer, the house now sits dark and silent. It's a small cottage with a sturdy door that was probably originally build to store things in.

10. This used to be the communal grain storage, and is sturdy stone building with a strong door and brick roof to prevent fires. It now seems to be unused and the door remains locked.

12. Stable hands quarters. A small simple house that used to be the home of the stable master and his family. Since the Iuz take over it now houses 5 grim men that follows Kirshenk every command, but are not civilized enough to be allowed the luxury of living in the main keep. Their main task is village guard duty, especially at night.

13. The Odven family works as servants in the Keep.

14. Vertz is grumpy loner who works as a tracker for the Eldermans in the Keep lives here.

16. Herzina is the villages best baker and cook, with Auldets second best oven after the inn, which she use to bake bread and other food for anyone who supplies the ingredients and firewood. In exchange she takes a little bit of the food as payment.

17. Lota and Socel are the most successful goat farmers in Auldet, but pay a high price both direct confiscation by the Eldermen and by taxation of what little profit they make on selling to Albetin, the Innkeeper or Ortefus, the Peddler . They just given birth a daughter and are seen as a hope by many in the village. Having a daughter have given them some slack by Kirshenk who wants the little girl to grow up and give him more inhabitants to rule over.

18. Gellian’s family lived here until recently. They was raising ducks and half the house was dedicated to the dusks and a pig and a few other animals. Gellian caught Hinnas killing and stealing and when he tried to stop Hinnas a fight broke up and Gellian got killed. For this Kirshenk condemned the whole family to be killed. Their bodies where recently taken down from the Execution Tree. The house have been empty since.

19. Mid Keep or the Guardhouse. It is the second biggest keep and used to house a some of the soldiers but nowadays sits looked and empty for the most part.

20. Ortin and his partner Nysenda lives here. They are a struggling couple neither of them being the sharpest tools in the shed. They have had four kids the last 6 years but only 2 of them have survived. Kirshenk use them for hard labour and menial tasks as much as possible. Now their kids are old enough to help means that they are even more useful to Kirshenk. When they are too hungry to work Kirshenk let them eat the cheapest food for free at the Inn. other neighbours help them at times to. It is a grim existence but they are trying their best to cope.

21. Fisdis and Wencia lives here with their son Torris. They are fairly successful farmers being disciplined and smart enough to pay what is needed to the eldermen to stay out of major trouble.

25. Raude who lives here is a proud mother of 4 kids from 1 to 8 which gives the village life. Who are the father, or fathers, is much very much the talk of the village. Most agree that it must be the Eldermen which means that no one dare to ask, and she is seen as a woman on the loose. She is friendly but more than a bit direct, and is often willing to lend a hand when work is needed without asking too much.

26. The Jicksan’s rent this house from Albetin, the Innkeeper and are jack of all trades family of the village Jicksan is a clever repair man and handyman helping out with maintenance work in between tending to the animals and helping out in the fields. Adnien is trying her best to be of help both at home and at the Inn cooking cleaning and doing laundry at the pond.

27. This hose have been deserted for some time and is no longer in a good shape. It had lots of marine things including a steering wheel on the outside wall, giving it the nickname the captains house.

29. Wagoner's house. This house belonged to a family who repaired carts and wagons. The lack of travelers after the Iuz take over doomed the business and the hose have been unused for over a decade.

30. Rounel and Gecinda lives here. They are an aging couple in their 40’s who fled from Axeport, drifted around the country side a few years and survived with their goats and a few other animals. They gave their two horses to the previous senior Elderman Shiglik to have the house and the right to settle.

31. An old Oak still standing outside Auldet’s half crumbled walls. The the Iuzian rulers tried to burn it down some years ago, but it quickly came back again and since then they have left it in relative peace and nowadays stays away from it.

The area maps are almost done, and a good test for a new generation Greyhawk maps. The village map and the map of the inn are quick sketches that I used to create on my tiles during game sessions and then take a picture of so save for future reference. Now I have taken that quick sketching to Photoshop, with a so and so result. The village and Inn maps are about two hours of work to create, a time that will be significantly less going forward, now that I have a template to reuse. When you ran a sandbox like me you have to map pretty much every settlement to this detail, including some of the building interiors as well, so you can't spend too much time refining things. For this campaign I probably have to do over twenty settlement maps from villages to cities in the next six months or so, alongside the 1000 or so square miles of countryside.

More posts are coming tomorrow, thank all you so much for making this possible!