What do you do when you have accomplished something? You start all over again, this time with the goal of doing it better! So with twenty years of experience and technology progression I'm setting out to map the World of Greyhawk again, and this time in much better detail, from a mile to a few feet. This post is a first look into how I have decided to try and go about doing it.

Twenty years ago the main tool I used was Bryce 3 from DAZ Software, which was the coolest thing in the mid to late 1990's. This time I have decided to use World Machine 4 as the main tool for terrain creation, you can find out more about it here: http://www.world-machine.com

WM is uses a visual node based approach to creating instead of text based coding, which is what I need suffering from a mild dyslexia, but very good visual analytic perception. The key to understanding WM and similar tools is to see them as data manipulators. How that works in practice I tried to explain in a series of WM videos you can find here: Anna Meyer - YouTube.

The goal this time is to create a virtual model of the Flanaess and potentially the whole planet of Oerth at a resolution of 5ft. This model will include elevation, texture and auxiliary data like coastline maska, biomes and more. In parallel create "in game" handout maps as well, but more about them in future posts. For now I'm going to concentrate on setting up the workflow. World Machine will be the hub and main tool for terrain creation and texturing. I will use additional tools like Gea, Vue, Terragen, Blender and probably a few others to create certain features. This is going to be needed to ensure enough variety, which is one of the key aspects of believable virtual terrain creation. Nature look alike but never exactly the same, so in order to cover millions of square miles a large number of fractal combinations will be needed. 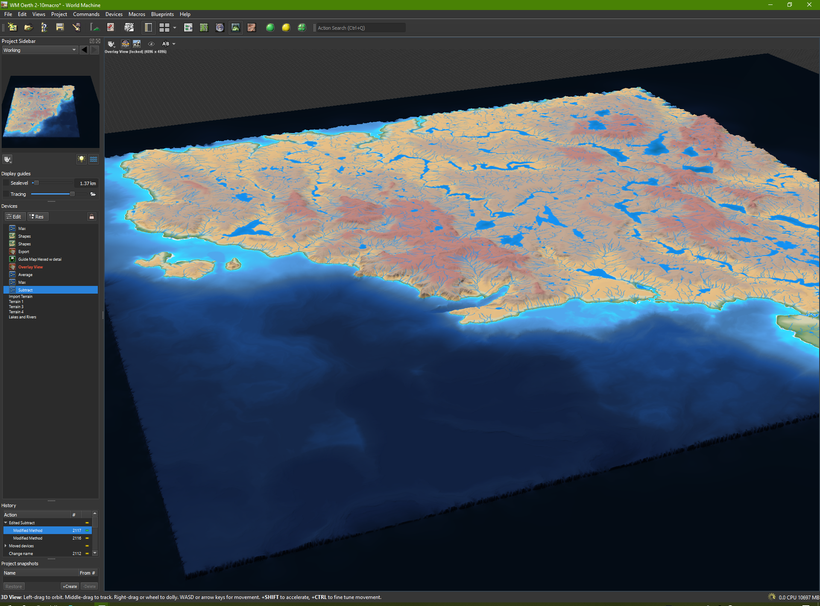 The first problem to tackle is the size. Virtual terrains are mostly used in computer games and as a backdrop for movies or as a ground for architectural virtualization, but this project is a on a vastly large scale. The Flanaess map covers 6000 miles West to East, and with 5 feet resolution that means 158,400,00 pixels across! We need to move to 128-bit computing to handle images of that size in one go, so it needs to be done in parts. In WM that can be done using tiling or re-import areas to work on adjacent parts.  I think both approaches will be needed since they both have pro's and cons, tiling makes consistency of rivers and the terrain over larges areas easier but you can only really see the result with the final render. WM can render 16K which means 16384 pixels in a single render. This is mostly due to memory limitations, which means you get a reasonably detailed view up to 125 miles. With tiling you can render up to 64K which makes means you can cover huge areas in one go. This will be handy when you have large areas when you don't need to closely match exiting maps, but want to have all the detail. With more RAM both can hopefully be increased and the accuracy of previews will hopefully increase as well in future versions of my tools.

My plan is yo get a new Threadripper workstation later this year with 256GB of ram a really fast SSD array and a beefy GPU. This will both speed up render times by a factor of ten, and make it possible to work on 32K or even 64K in one go. In a few years with even faster computing and GPU's number crunching it might be possible to render 128K in a few hours. I made the same bet on Moore's law 20 years ago, and I think it is safe to make the same bet again this time.  The Flanaess is withing reach in five or so years ad the planet within 10!

At first I tried to create everything, elevation, textures and the other data in a single pass. After years of struggling I now know that it is better to do it in stages. First a terrain base at roughly half the resolution to get coastlines hills, lakes and rivers in the right place and export that. Then merge the renders in a new file, detail the terrain with little things like boulders, cracks, wear and tear. Then render that again at the final resolution together with masks and textures. Since the underlying terrain is already done you can take quick sneak peaks at small areas and rest assured that what you see is going to look the same in the final render.

Keep things simple is the order of the day. I've learned that the hard way after years of experimenting.  Below is the principle of the first stage in world Machine. 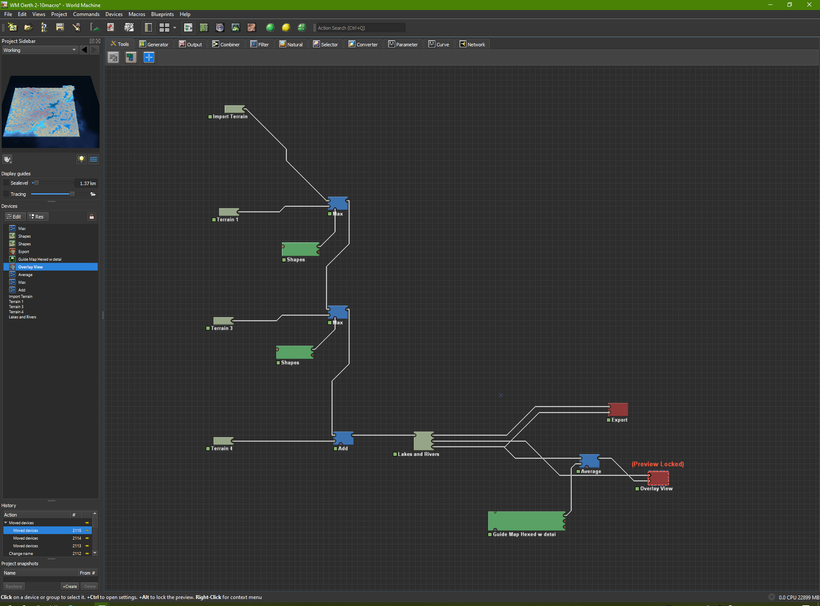 I have turned the different part into macros so it looks deceptively simple, we will look into each of the components in future posts. The first part is Terrain Import, to handle areas and features that have been created using other tools.

The next stage is to blend in the different terrain "fractal recipes", Terrain 1, Terrain 2 and Terrain 3 in this example. Each of the macros can consists of a myriad combinations of fractals, erosion and filtering, and they are controlled by a Shapes Device. the Shape Device can either be inside the Terrain Macro or at the Combiner, both works, but can yield different results. They can be blended into the terrain using different combiner settings, like Add, Max, Subtract, Overlay or Screen, depending of how you want it to affect the final result. Next come the most complex bit, Lakes and Rivers. This will be a topic for several blog posts and videos, it is a deep topic!

The final bit is export and Guide Map overlay and the Overlay View device. To cover the Flanaess a dozen or more of these files with be needed, each with a dozen or so terrain types in them. This can create a virtually endless variety of natural looking terrain.

Another very important consideration is the vertical scale, how high are the tallest mountains, and since we are talking about Greyhawk how deep are the Rift Canyon. The Rift is a topic in itself, but I think it is too deep to cover in a the main terrain creation. The goal for the first stage of terrain creation is to cover all the landmass and the coastal waters. My reasoning is that some part of the land is below sea level so by including one you can include the other in the same setup, the coast below seal level is also close connected with the land and makes it a lot easier to cover how tidal and other changes to the ocean levels affect the coasts.  My belief is that 22 km (13.6 miles) is enough to cover everything from coastal seabed, low-lying terrain to the tallest peaks. Below is an example terrain 6 x 6 miles with a few little islands and a peak rising to a bit over 6 miles up. 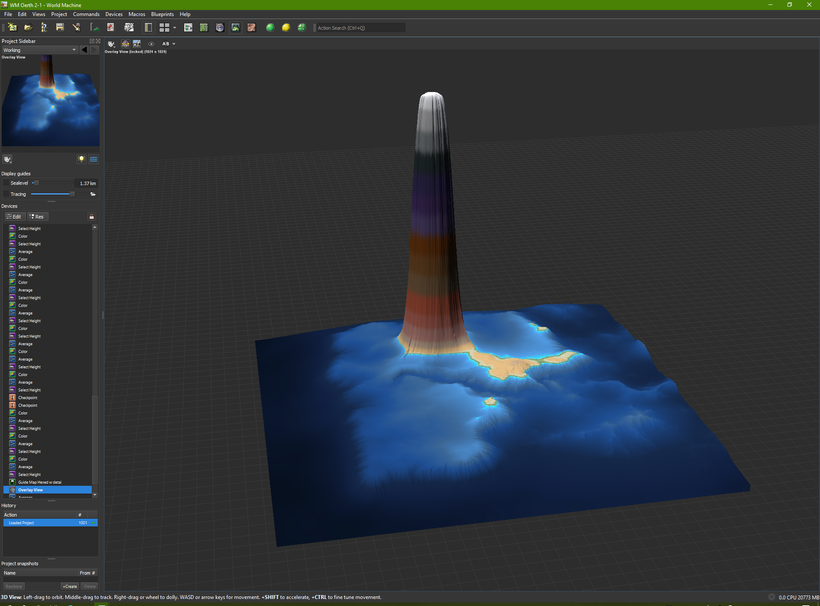 This was a first look at how I plan to do this. Next it is time to dive in to each of the components and start looking at the details.