This was the post I was planning to post first today then the Ritersmarche area update got ready early and I posted that one first. First let me say welcome to all the new patreon members, thank you so much for making this possible!!! 🙂 The Greyhawk 2.0 project is experiences both setbacks and successes, it is one step back and two steps forward. I was hoping to use the new World Machine 4, but that seems to be a bit premature. One of the key features for me is to have overview, when you map large areas you need to have an idea of what this look like on a larger scale. This has always been where World Machine stood out against the competition. In the latest version emphasis have shifted more towards better view of the area in focus losing some of that overview. This is probably something that most artists and game developers like, but a problem for me. Thankfully the old version is still here, and I can have both installed side by side and use the best of both, and with a few updates WM4 might be as good as WM3 in this regard.

The image above shows how much of the world I've mapped at the first stage so far. From the Critwall peninsula and Scragholm Island in the foreground to the former Shield Land coast all the way past Axeport to Battledown in the east. The vertical coverage from - 1 km (0.6 miles) to 10 km (6.2 miles) with 32bit which means enough resolution to make it all smooth where that is needed and sharp when that is needed.

There are more water in this stage than it will be in the final version, especially lakes and rivers. The texturing at this stage show all the areas that CAN be lakes, rivers and other wetlands as blue. I will mask that down to a more reasonable level at the next stage, converting some of the blue areas to marchland or just flat land areas. This process will mostly be artistic and done manually in photoshop and then re imported into World Machine to feed the next step. This first step is mainly about terrain building, so lets take a closer look at how that is done.

Most computer generated terrain generated using fractals, and World Machine comes with three different fractals generators Basic Noise, Advanced Perlin and Voronoi. The first two are both perlin generators but with different ways to do the settings. 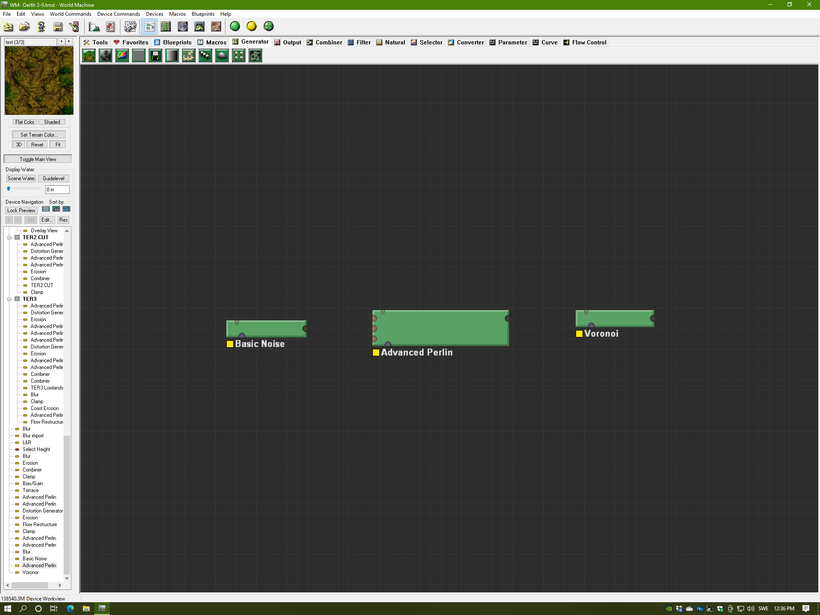 Here are an example of a Basic Noise output 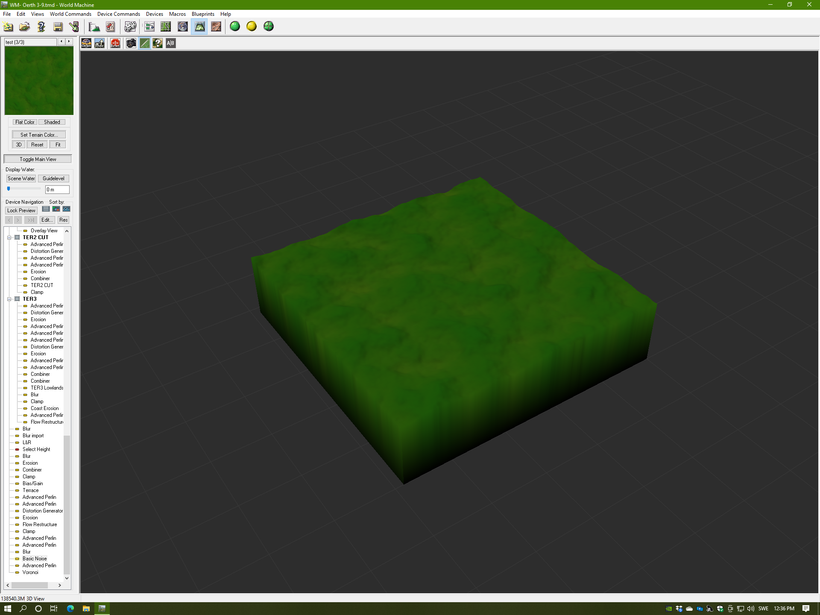 and output from an Advanced Perlin generator 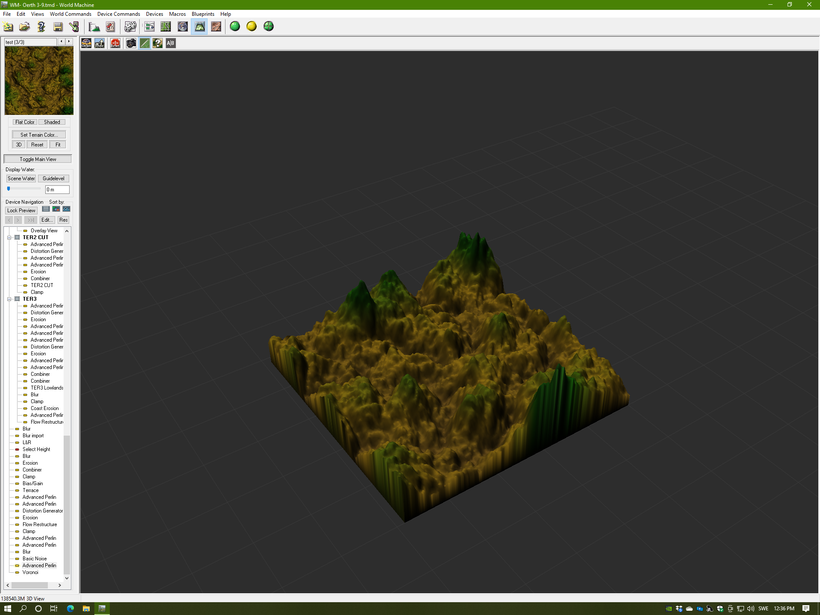 Perlin noise is great for creating all that under-laying fluctuations in landscapes, especially lowlands and the variations of large areas that are only visible against the horizon or from a high vantage point. These minute variations in landscape elevation forms the basis for lakes and rivers and how water flows across continents, and this is one of the main base data for texturing so even if it is hard to see the differences, the play a huge role later in the process.

Voronoi is a bit different, it created various forms of angular patterns in the forms of triangles or squares, sometimes very pure or broken up into intricate patterns. Voronoi can be used for a range of things from forming the base for large massive mountains to the pattern of farming fields around a village and even a random placements of houses in a city. 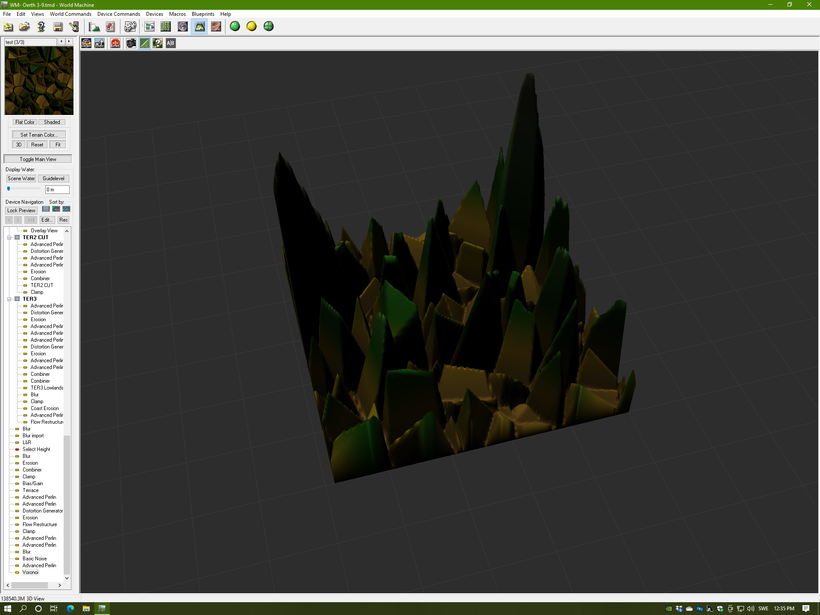 Fractals are rarely used in simple and pure forms, it is when you blend and tweak them the magic starts happening. You can blend data from tow generators using a Combiner, ad the data can be added, subtracted, multiplied or mixed in over ten different ways. Photoshop users recognize that this is just like layers of pixels can be blended in images, it is all the same type of manipulation of data.

Below is an example of how I have set it up in WM, this is a simple setup using a single Advanced Perlin generator. Fractals look repetitive over larger areas which in usually not the case in nature, so that need to be fixed. Large area variation is created by introducing distortion, which is created using a Distortion Generator. To make it more complicated the Distortion Generator needs to be given a pattern for the distortion and for that I've used two additional Advanced Perlin Generators one for the N-S (X) axis, and one for the E-W (Y) axis. WM works using gray-scale heightmaps so Z axis is not needed. 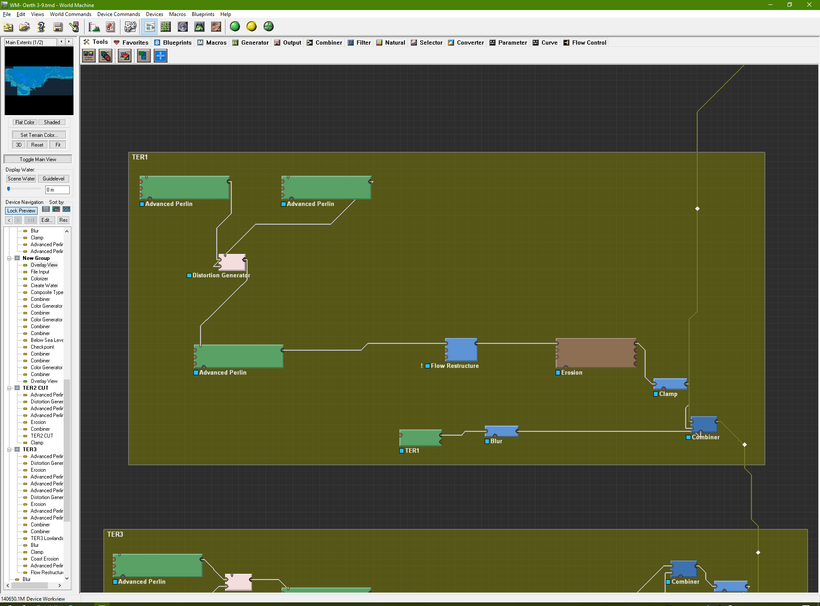 The generated fractal data is then fed into a Flow Restructure device, which makes sure all the valleys are flowing downhill creating realistic drainage. This device is a godsend but a late comer to WM, and if you look at all my maps so far they are not realistic in this regard. Thanks to this nifty device and its companion device Create Water it is now possible to create realistic lakes and rivers automatically. The data is then sent to an Erosion device and then a Clamp device to reduce it to form lowlands. Erosion is huge rabbit hole that needs to be looked at specially, so I'm going to skip over it today.

The green device labeled TER1 at the bottom of the group is a Layout Generator that let you create vector masks telling WM exactly where and how much you want this terrain to cover. A Blur Device smooth out the edges of the vector masks to make them blend in a bit more, and then a combiner with the Max blend mode integrate the data into the rest of the terrain.

More complicated versions of this uses two or more chains like this blended together in various ways.

You can learn my by watching my introduction to World Machine YouTube videos:    (56) Anna Meyer - YouTube or even better resources  can be found here: https://www.world-machine.com/resources.php?page=tutorials