Time for the next installment in my series in how to map the World of Greyhawk, all over again. My last post was about how to use fractals to create the shape of the terrain, now its time to lift the perspective and look at the big picture. How to build the world, one piece at at time.

Even the best of computers cannot recreate a whole virtual world full of details and color in one go, it is like eating an elephant, it has to be done one piece at a time. Add the quirkiness of terrain generation tools to the mix and it requires you to be both careful and daring, and to plan how you do it. It has taken me years to figure out how to do it, trial an error and learning from others attempts. This says as much about my intelligence as it does about the difficulty in doing this, I don't advice anyone to do this unless they are VERY passionate and possess a large potion of stubbornness, if that is the case you should definitely do this. You will have something to occupy you for a very long time 🙂

When you have fiddled around with the fractals and have created a bit of terrain that looks perfect, as a world cartographer like me you get fond of it and want to save it and shift focus a bit and add more carefully shaped terrain next to it. This is where one of the many quirks of CG terrain creation tools come in to play, when you shift focus ever so slightly the results change. The same happens when you look at things close up or further away, and I find it VERY annoying and it took me along time to learn to live with it and figure out how to work around it.

The way I have decided to deal with this problem is to first calculate how large of an area you can render at your desired resolution. The desired final resolution is 5ft, and the maximum render resolution is 16K (16,384 px). So a 16K map @5ft per pixel is 81,920 ft which is 15.51515151515152 miles. This is not rocket science and no real creatures are going to get hurt, so lets round it off to one decimal 15.5 miles. Hopefully it will be possible to work with bigger renders in the future, but right now this is the size we have to work with. there is an option of using tiles to cover larger areas in single render. It comes with its own set of problems so I'm going to avoid using it if possible, but it is an option that is good to keep in mind, and I'm also recommending to use a workflow that retain that option. This is another reason I decided to split terrain generation from the water creation and texturing. 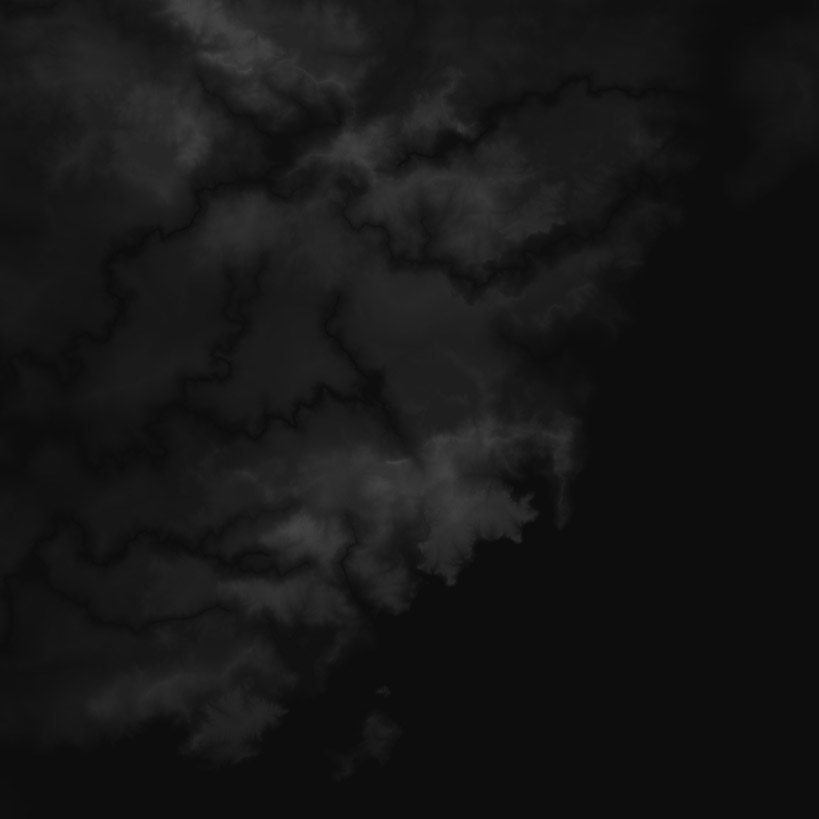 Rendering of an 16K area take my now venerable 8 core Intel workstation around 6 hours or so for the height map alone. So if you don't have one of those new 32 or 64 core Threadripper monsters, I recommend to have a separate computer that can crunch in the background while you can work on other things. Overnight I often set both computers to render to speeding up things. The result of the render needs to be exported into some sort of file and stored for suture use. The only thing needed from this fist stage is the elevation data in the form of an height map. An heightmap is just an greyscale image with the higher areas being indicated by brighter and brighter grey. Any type if bitmap format that can handle greyscale images can be used, the key issue is the bit rate which is effectively the vertical resolution. Most images we take with our phones or see on the web are 8-bit, which is great for Minecraft like terrain but for detailed real world like mapping we need way more so its 16-bit minimum and preferable 32-bit. The files get significantly bigger with each increase but it is necessary to keep our options open. World Machine has a built in 32-bit native format that saves the date as a WM Library, the downside to this is that the data can only be used back in world Machine again, but at this stage that is not a big problem. The huge bonus is that the date is geo-located, so when it is imported back into a new WM project the it knows its place. This saves a lot of note taking and keeps the precision really high.

Importing the saved WM library file makes the next CG terrain quirk apparent, raised edges. When you render an area the center bits match each other almost perfectly but the edges stick up and need to be masked off manually by using a set of Layout Generators like this: 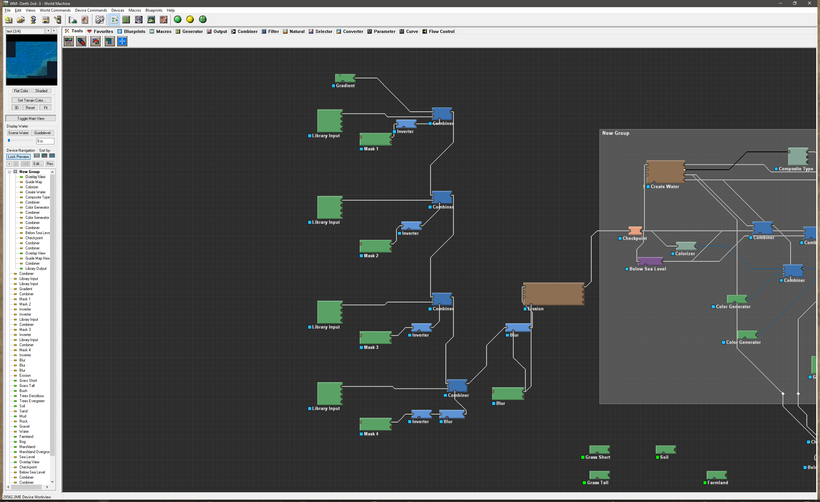 It is a bit of a fiddly nuisance at times, but with a bit of blur here and there added the result are usually more than acceptable. Now we have a ready rendered area to add to that are fixed so no nasty fractal surprises and to look at it in high resolution is much faster since all the hard work calculating fractals and erosion are already done. By using WM Library devices and keeping the exact same settings for the guide map, working on areas using different WM project files becomes possible without sacrificing quality. Instead of using a huge WM file with a large amount of terrain recipes in order to create everything from arctic mountains carved out from glacial ice to wind eroded deserts landscapes in single file, we can now use lots of file instead and export an import between them. The drawback is that you have to render at the full resolution at all times. I have tested use a master terrain rendered at lower resolution that covers the whole area first, and then scale it up to add detail but found it lacking in variation. Even at lower resolution you need to have a huge variation to create a believable landscape covering an area as large as the Flanaess, and a fantasy world should look even more impressive in places. This require fractal combinations in the hundreds, with as many different erosion variants and settings as well.

The first job is to be artistic and first try out different fractal combinations together with filters and different erosion settings, then you need to play around using Layout Generators to create the landscape you need. Then comes the tedious rendering, exporting and then import back the results and mask the ugly overlapping bits. Water is next, to map out the areas that can become lakes and rivers, and create the ocean surface or in this case the surface of the mighty Nyr Dyv. Fir this WM comes with a built in Create Water device, and as you can see in the screenshot below, it is not fully compatible with tiled builds. Lots of nifty and handy devices comes with this limitation which so try and use a non tiled approach if possible when you are using World Machine. 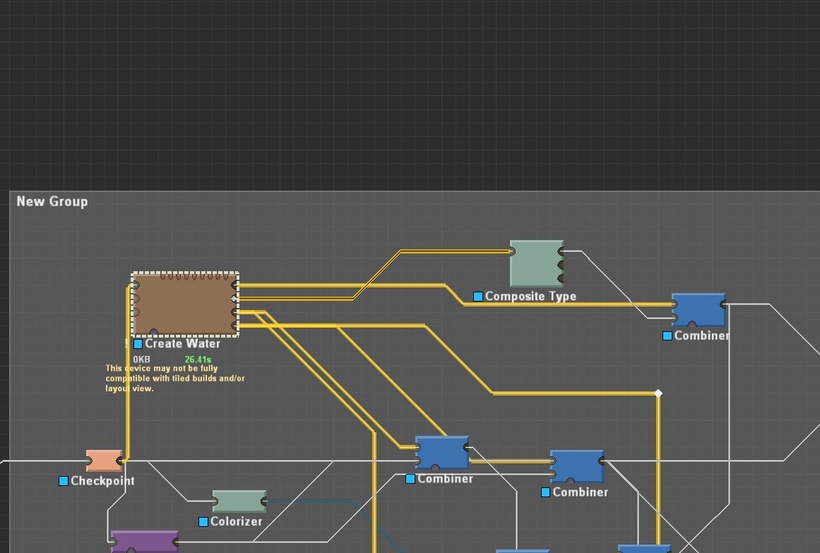 Next is a very time saving follow up device with a cryptic name of Composite Type, it is one of the hidden gems in WM. Another user pointed it out to me when I complained to have to fill in all the lakes manually. The Composite Type Device will do this automatically for you, and it will also give you a depth map, which is great for texturing which I will cover in a post coming soon. The Create water and its ability to generate a complete and believable natural looking lake and river system is a godsend and one of the major reasons I'm using WM, no other tool does this, this well yet. The catch, and there always is a catch in CG terrain work, is that you always get a maxed out set of lakes and rivers. In some areas that are rain drenched and relatively you genealogically speaking, this works great. Most areas though comes with a bit less rainfall and lakes have over time partially of fully filled up creating marshlands bogs or flat solid land instead of the lake that once filled the valley. Rivers carve out a deep valley but then are reduced to a lesser flow that meanders thought the old river depression. This requires new set of render, export, artistic intervention using Photoshop and then import back into World Machine again. It is tedious work but actually rather relaxing and fulfilling, it is hands on world building without waits for renders. It will also be the topic for a post in the series on how to map the World of Greyhawk coming very soon. 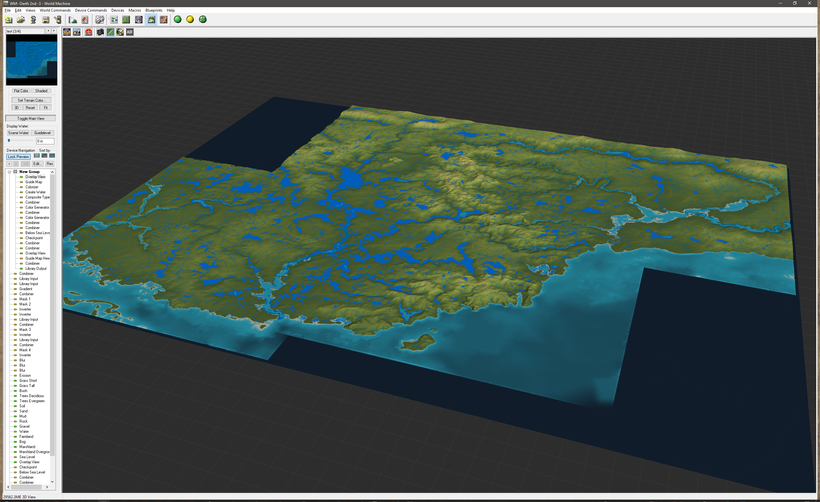