After a series of very technical posts, it is time to go back to the World of Greyhawk. This time as literally as possible and trying to figure out what the land looks like, surveying in cartography speak.  In real world mapping this is done by combining field measurement, aerial and satellite imaging and so on, but how do you survey a world that does not exist?

My approach to fantasy surveying is to use all the available sources in the form of texts and maps, real world inspiration and use logic to try and create a landscape that would fit the inhabitants and stories. Text is in my opinion often more reliable than illustrations and maps, maps and art is usually created by outsiders with limited knowledge of the setting, and tight time and monetary constraints. This factor often makes the text more accurate than accompanying material, a big caveat to this is that some writers does not seem to pay much attention to geography. Landscape is often not even mentioned, and if it is features are added either as flavor or because they are needed for the story. This makes it hard to deduct geography from RPG material, and there are lots of inconsistencies.  Small details are given lots of attention and vars areas are just glossed over. My job as a fantasy cartographer is in many ways to fill in all those huge gaps, to glue the few details mentioned, together.

For my campaign and as a first test area for a new generation of Greyhawk maps I am doing this for the Southern Shield lands, so let us investigate this process in more detail. Phase one is to look at the sources, in this case: The 1983 Greyhawk Boxed Set, From the Ashes Boxed Set, Living Greyhawk Gazetteer, each of them came with a setting map. Living Greyhawk modules and some fan created content gives a decent amount to go through.

To better understand the texts, I want to first go over the maps, starting with the oldest. In this case that is an old Greyhawk setting map that comes from Len Lakofka. I think it predates the Darlene map, and it is interesting since it is in large feature complete but still very rudimentary. The Shield Lands shows the layout we are familiar with from later maps with the exception that Admundfort is in the middle of Walworth Isle. 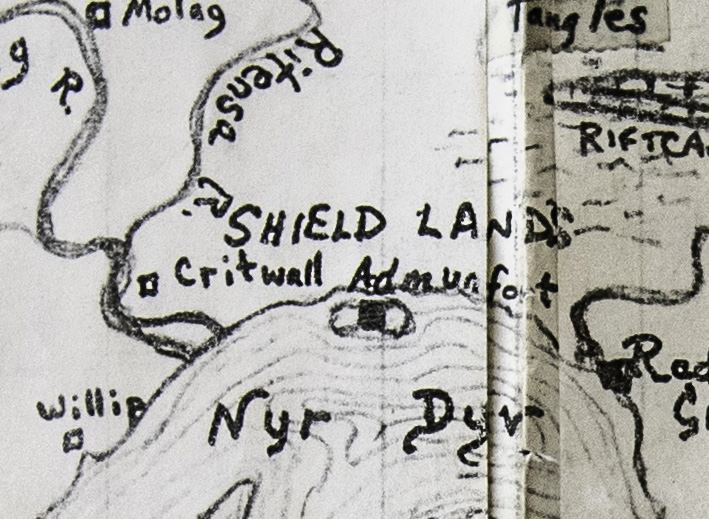 Next in line is the defining map of Greyhawk by Darlene. Its sweeping lines and shaded coastlines are beautiful and combined with the 30-mile hexes it gives us a basic understanding of the geography. 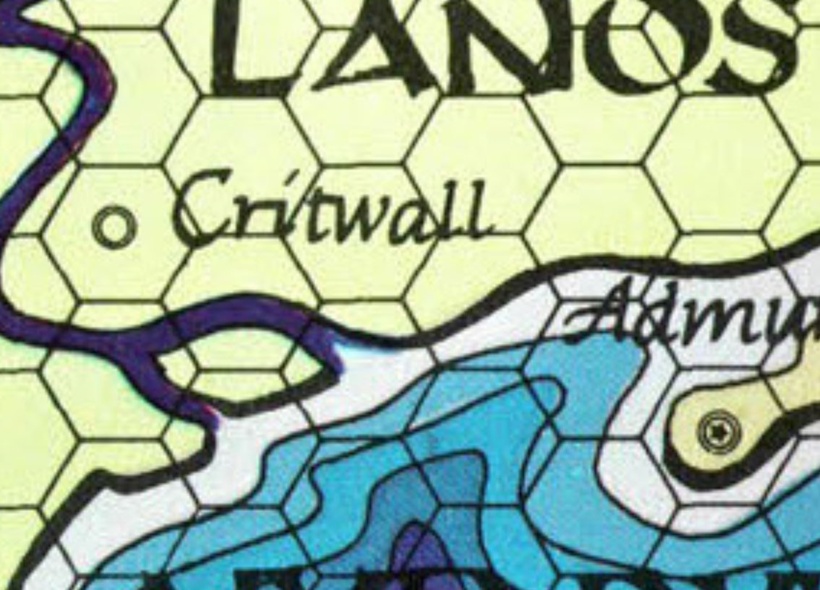 Next up is the Greyhawk map that came with Dungeon Magazine by Rob Lazzaretti. It is different in style from the Darlene map, but shows the same general geography. Many new settlements make their first appearance on this map, and Axeport, Herechel and Bright Sentry show up in our area of interest. 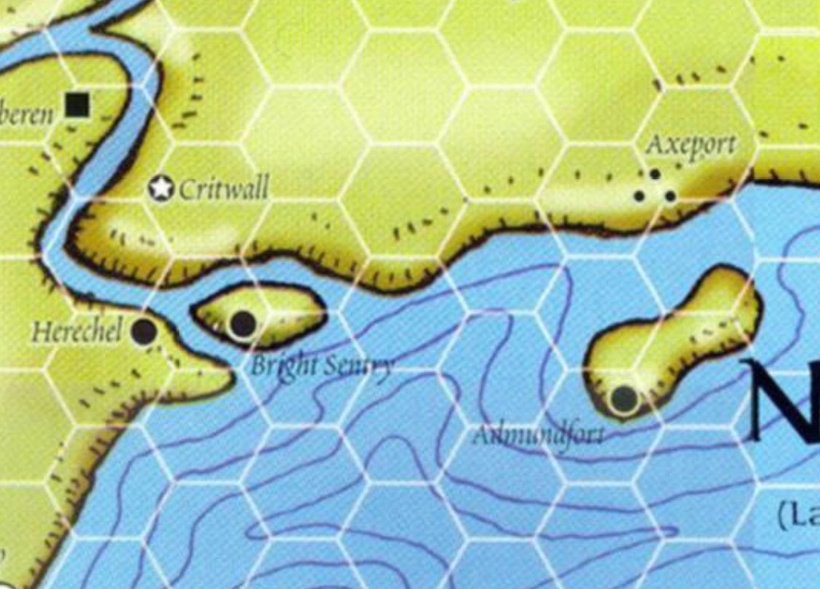 Living Greyhawk campaign was a source of a plethora of maps ranging from maps that are solid additions to the lore of the setting to maps that should in my humble opinion never have been made. I have found one map, apart from the Lazzaretti map, of the Shield Lands from the LG era. The map below adds several new settlements from the LG modules, but nothing else that we did not already know from the other maps. 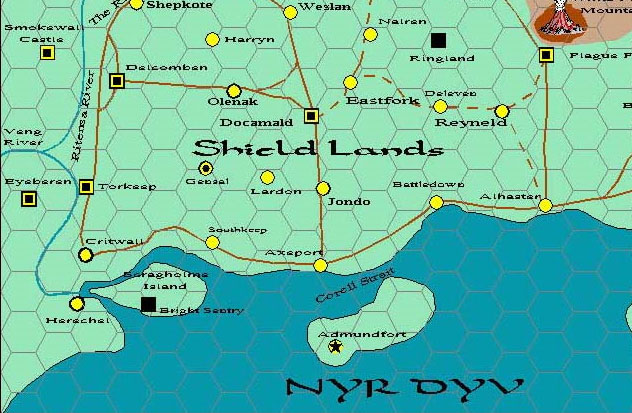 Thankfully, Eric Anondson created a series of fantastic Greyhawk maps adding a lot of details from the LG era, it was and still is some of the best Greyhawk mapping and a huge inspiration for my Greyhawk mapping. I started my efforts before he did, but worked so slowly that he quickly covered more than I did, which gave me the chance to be inspired by his great work. 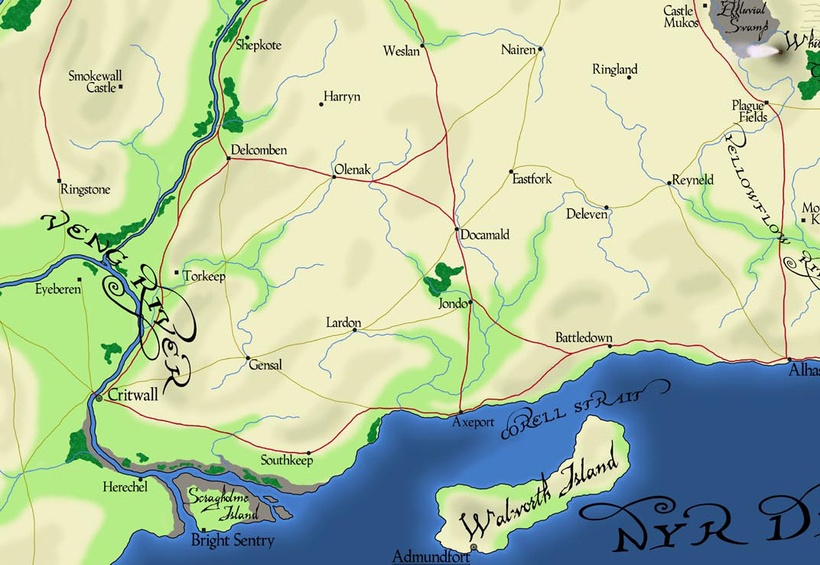 Erics map gives us a first look at how the elevation of the land and how it is drained and confirms the placement of settlements added in the LG modules. There is one river system that reaches a large part of the interior of the Shield Lands and flows into the Nyr Dyv west of Axeport. If the major port along the coast is not placed at the estuary is telling, if the river was easily accessible by boats it should have a settlement housing those who exploits the trade opportunities. Making the estuary of this river, that I named the Sanstin in my campaign, a shallow marshy delta stretching inland for several miles would make the Shield Landers looking for a better place to build a port. 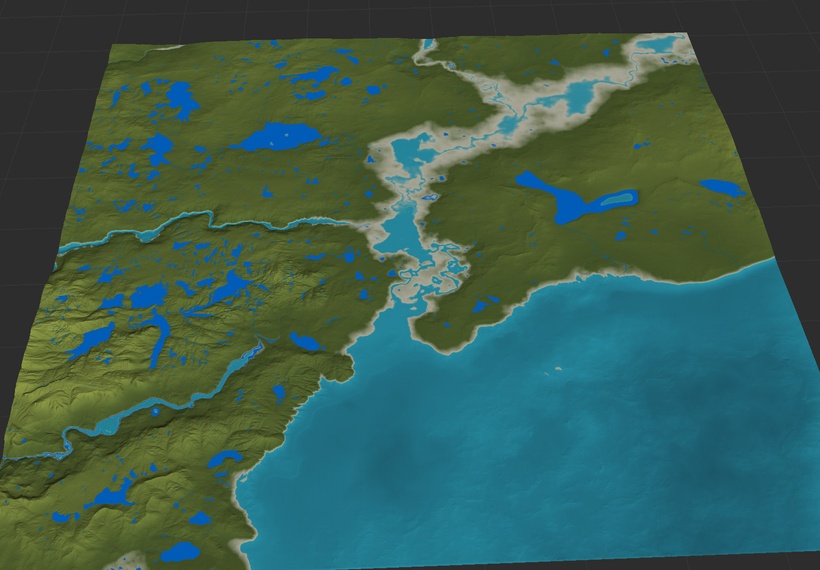 Naming conventions for places can have many roots, and it this case I thought placing Axeport on a small peninsula that is vaguely axe-shaped could ad a bit more realism to the landscape. 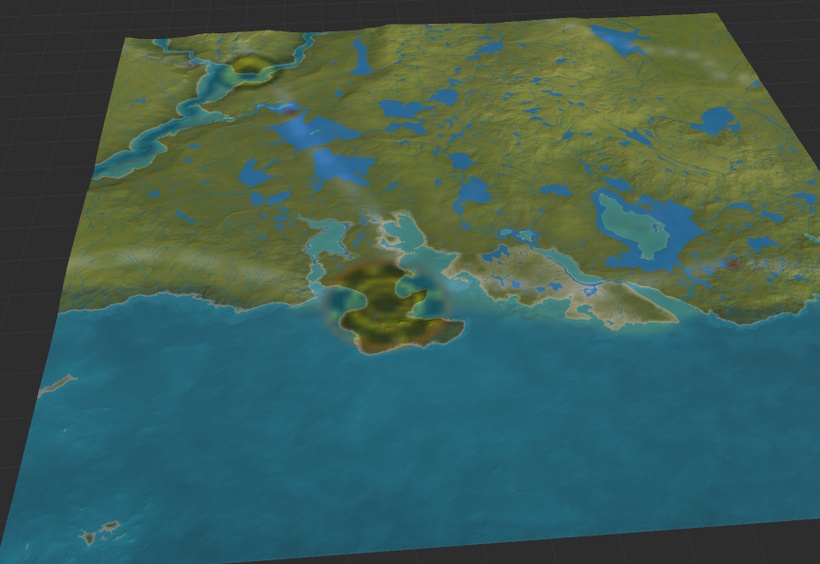 I made Axeport a large town in my campaign which is why the guide overlay reflects that.

The Veng must be a huge river in the same league as the Mississippi or Volga rivers depositing large masses of sediment into the Nyr Dyv making this part of the lake shallow and muddy. Scragholm Isle has a core of rock that parted the river but is mostly made up of sediment that have solidified over time making it flat with marshy edges. 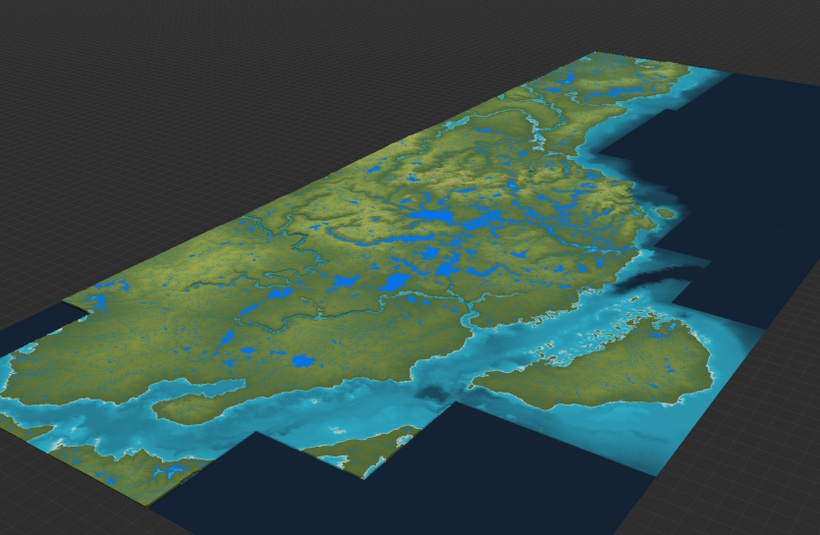 Critwall I reason is located where it is due to both good access to river and lake traffic and by placing it on a slightly elevated peninsula gives is both good flood protection and makes it easier to defend. The next major settlement along the coast eastward being Axeport some 70 miles to the east gives us a lot of coastline to detail.

Next step is to work out the climate, and here there are way more to go on. The Shield Lands are stated to be in the temperate zone, and the small overview map on p18 in the 1983 Glossography gives it a northern latitude of 40 degrees. This is equivalent to the Great Lakes area in North America or the northern coast of the Black Sea or the Caspian Sea. The latitude is only one component in the climate, how dry is it, how are the seasons, and where does the wind usually come from are other huge factors to way in. Oerth also have a larger axial tilt of 30 degrees which will enhance the seasons.

Oerik is a huge continent larger than Eurasia and the Flanaess are larger than Europe wo we can assume that the Shield Lands would have an inland climate moderated a bit by the Nyr Dyv’s mass of water but exaggerated by the axial tilt. The Flanaess has mountain ranges in the west and east, with the west being massive, this should leave the center of the Flanaess less humid with dry hot summers and not overly wet cold winters.

The texts hardly mention geography at all which and combined with the lack of map features gives us a good reason to presume that the area can best be described as plain, combines this with it being a bit dry and having an inland climate and grassy plains would be the dominating landscape. Sounds boring, so now it is time to add in detail and creativity!

We have a huge volcano and an out of this world sized rift a few hundred miles to the north east, so we have geological activity for sure. This means we have fault lines; old lava flows and other interesting features to add. Maybe not in the immediate area of interest, but things can and often should be worked in gradually, so we need to keep this in mind.

The geological history of the area is also especially important, has it been covered with ice, how old is it, has it been flooded often or recently, was it more humid in the past. Cannot find anything in the texts about this so we must improvise a bit. I will hold off on glacial erosion for now, faults and volcanic activity is enough to work with. My assumption will be that the area is generally sedimentary, meaning it is old lake or sea bottom that have risen to form the land. Geological forces in the past have created a rolling landscape with low hills here and there, and volcanic activity over the eons have sprinkled it with occasional stand out features, from old worn-down craters to lava flow areas forming craggy ridges and mesas.

Depressions in flat landscapes tend to fill up with water, and if the waterfall is rich and regular rivers form and erode the land further making some lakes disappear and creating new ones in other locations. All this means that there should be way more lakes that are on the almost lake free maps that we have seen so far, and in not so wet climate of the current Shield Lands there should be lots of old dry lakebeds now overgrown with grass or bogs that are either dried out or still wet.

Vegetation will be mostly bushes and trees near rivers and other wetter areas. The few hills and higher terrain could be home to more vegetation due to humidity from clouds being more common that down in the lowlands. Similarly, the river valleys and other low spots in the landscape could get a bit more fog and mist making them home to more vegetation. Edges of rivers and marshes would also often have a string of vegetation.  If trees are scarce areas close to settlement might have even less due to humans cutting down most of the few trees for building material. Firewood can often be replaced by peat to save timber for better use.

With these thoughts I am setting off to visualize the landscape of the Shield Lands, I hope I have inspired you to give fantasy lands some extra attention in your gaming!