After a long series of technical and behind the scenes post in this series it’s now time to start turning all that work into the first stage of the final map, giving the terrain proper realistic texturing. Nature is both endlessly varied and yet still abide by rules and predictable patterns, and to replicate that using fractals and clever programming is not easy. The SPLAT map is the first stage of that defining what time of Biome each area is a part of the next step is to define each Biome and then blend the Biomes according to the SPLAT map data.  We must turn the SPLAT map below: 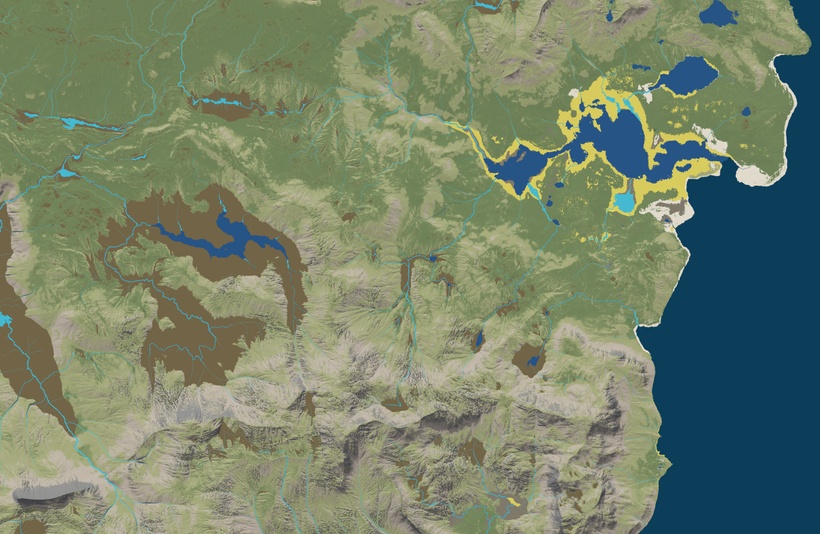 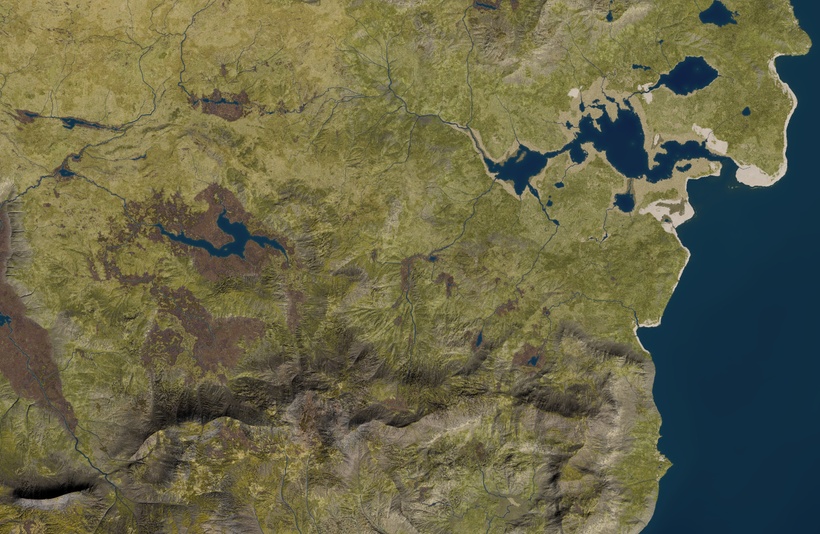 Done right a fantasy landscape can look totally believable, yet specially created to suit the stories that are meant to be played out in it. The trick is to define each Biome properly, and have the Biomes appear where they realistically would do so. The example above only has a few Biomes, to types of grass, one short and barren and one longer and richer, bogs, lakes, rivers, reeds, sand, rocks and gravel.  I've used the selection tools that was the focus of the last post in this series to create the SLPAT map, then edited the Splat map in Photoshop to improve on the things that my fractal programming didn't do a good job with. Artistic input in the form of painting using a stylus is also a great way to work in some of the special details from written sources or needed for the stories. This approach also makes it easy to adjust things, make a test render using half resolution and go bac to Photoshop and edit the Splat map fix issues and then render again. 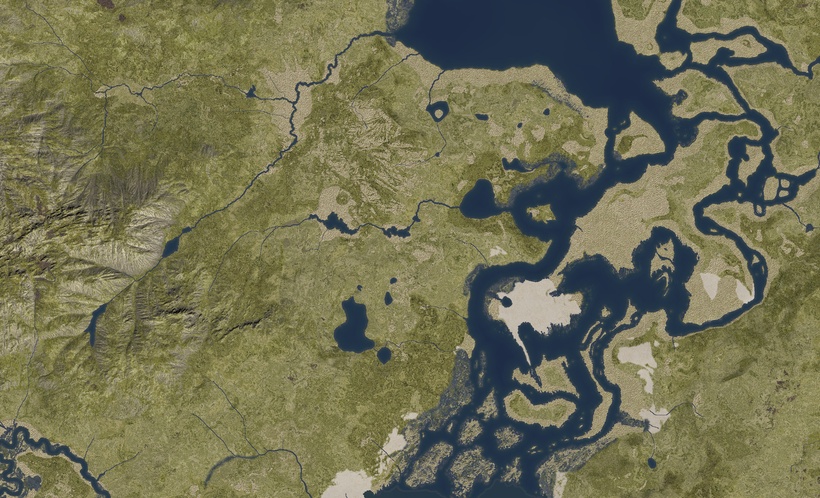 Let’s look at a couple of the Biomes, starting with the grasses that are the light and slightly darker green on the SPAT map.  Most of Shield Lands are covered, in my view in either a more barren type of open sparsely overgrown open plains, with short hardier grass and occasional low bushes and other hardy forms of sage. Higher up the grasses are gradually replaced by mosses and hardier forms of ground hugging plants. The darker green are more fertile lands, plenty of grasses, herbs and blooming flowers forming rich meadows, bushes and trees are still rare due to both lack of consistent and ample rainfall, gracing by wild and domestic animals. This is not really the case anymore, the war has decimated and scared off both domestic and wild animals, but the standoff and population decline have made wild animals move back in again to some degree. If the hostilities continue the area might see more bushes and trees, or more fires and devastation that depends on the outcome of your campaign!

Here it is important to state that it is exceedingly difficult to model temperate wild plains, that is a habitat that is almost complete gone on Earth today, replaced by industrial agriculture that have turned the landscape into a gigantic production facility. This requires studying the few little remnants left, creativity and some guess work to come up with something that is useful from a gaming perspective, and inspirational.

Landscapes have a history, and that needs to be considered to make them believable. Shield Lands the way I see it has a surprising amount of landscape variety and history, I've assumed that this landscape is a mix of mostly old and work down terrain made up of a mixture of sedimentary and harder rock covered by a fair bit of soil in most places. Here and there are the scars of old vulcanism in the form of rugged basalt features, which will get more and more common the closer we get to the majestic White Plume Mountain.  I also assumed that it used to be wetter in recent geological history and used to have way more lakes and bigger rivers. The lakes are now mostly turned into bogs, with small lakes in the center of some of them and a lot of them partly or fully overgrown. This makes the landscape dotted with valleys with a very flat bottom and totally flat areas dotted around in the otherwise covered in rounded low hills. The Southern Coast feature a set of moderate hills, that I have named the Serion Hills in my campaign, with rounded granite peaks rising into about 3000 feet in a few places. Not much to speak of compared to the majestic mountains elsewhere in the Flanaess but still high enough to be different than the surrounding lowlands. 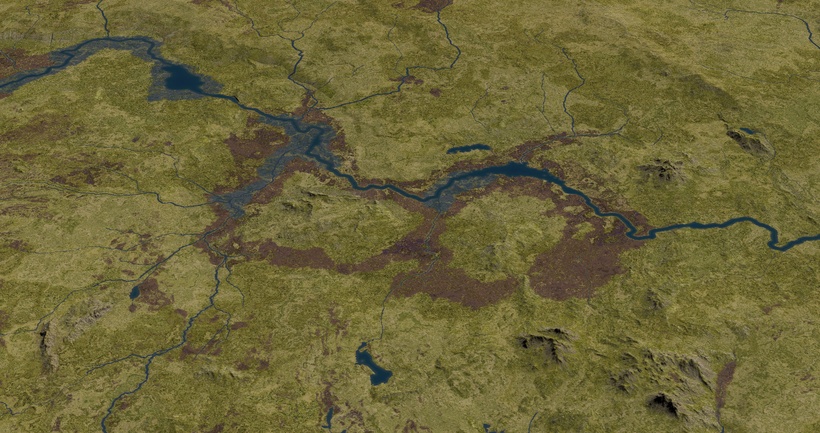 Above is an example that even the most boring parts of a game setting has interesting features and stories to tell, even if it is only a green hex on the earlier setting maps. I have found two “islands” surrounded by bogs which seems great places for a keep or a small settlement in easy to defend places.

It needs to be stated that all the screenshots in this post are raw renders and should be seen as work in progress and not finished maps, one more refinement of the SLPAT is needed, vegetation added and a final post render polish in Photoshop. That said I’m proud of the results at this stage.

Below is the World Machine setup for the Short Grass Biome.

It uses two Colorizer Device that uses the colors from images of grasslands with variation driven by distorted fractals. Mixing them using elevation, flow, slope and convexity, and then tweaking the colors according to elevation.

The Long Grass is similar setup but with different fractals color tweaks and elevation parameters. 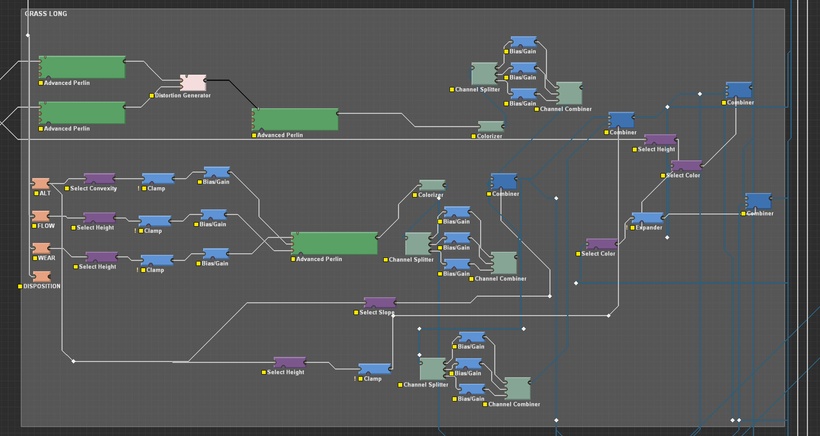 Bogs are simpler, a colorizer taking its values from bog images, a fractal to drive variation, and a color selection to insert grass texture on the green areas.

And here is what the result can look like with the help of a bit of manual splat map editing. 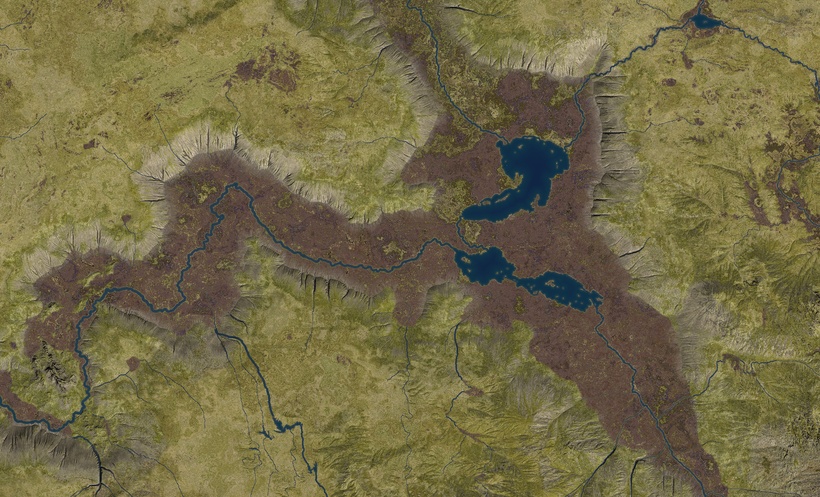 With only an edit or two of the splat map for each area you can re-use the same World Machine texturing file for a whole region that share the same characteristics. Then make gradual tweaks as you move into new areas.