One thing most Greyhawk fans have in common is a curiosity of what the rest of the planet looks like, with that said, there are probably few issues that will bring up more difference then what the rest of Oerth looks like. So it is with great trepidation I have taken on the task of modeling the planet. 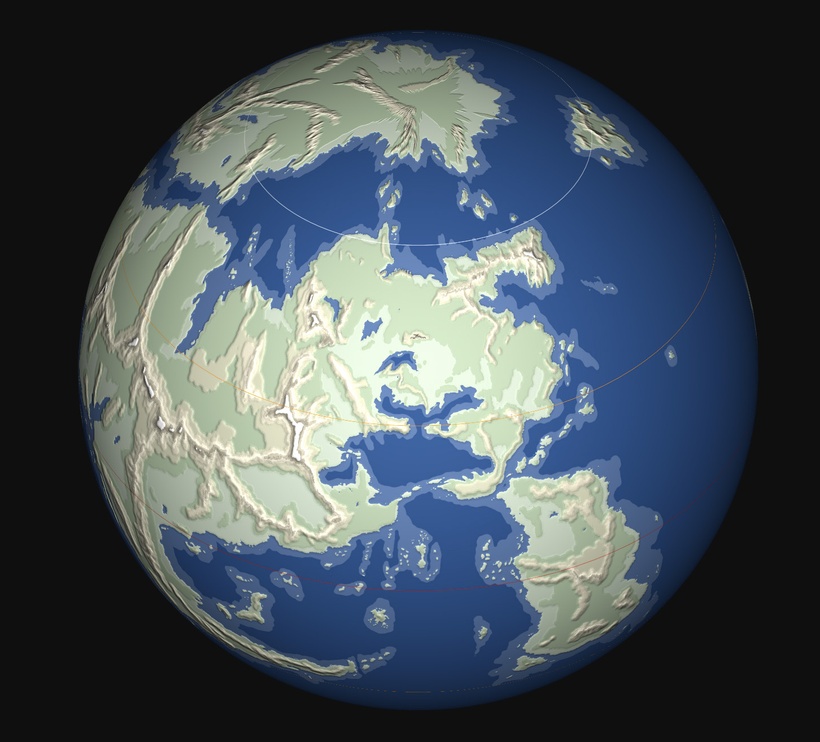 My approach is to try be inclusive and make room for lots of things, while still try and pay homage to existing work that have been done before. From the little map in the Glossography, the Dragon Annual #1 map and numerous fan made maps have taken turns at tackling the "cowhide", it is hard to hide the fact that the DA1 map looks like an ugly cowhide.  My approach is to look at all these maps as I would look at real world ancient or medieval maps , a work of art that vaguely resembles the lands it is trying to map.  I kept the basic shape but broke up the coastlines and added lots of detail to try and obfuscate as much as possible. 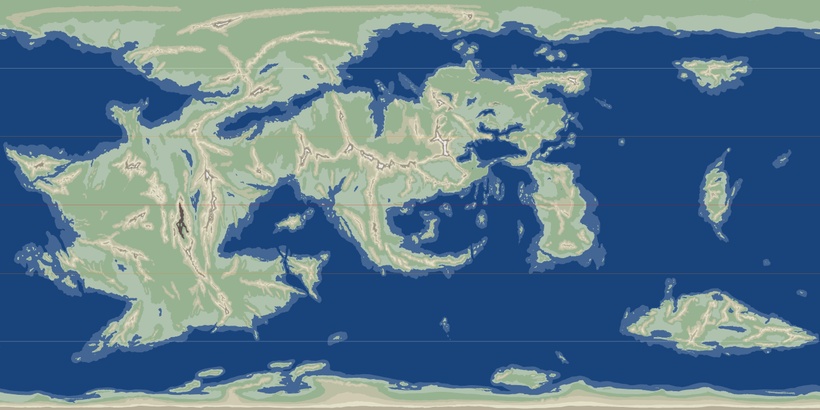 Overall I'm fairly happy with it at this stage, the cowhide is half hidden and broken-up by mountains and other features. Geographically it is a very interesting continental layout with pleasantly habitable areas sprinkled out in several places, and a lot of contrasting areas with plenty of adventuring possibilities. The Flanaess for example stretches from the arctic to the tropics with at least a sliver of every type of climate zone (more on that in the next post in this series) to make it extra interesting. 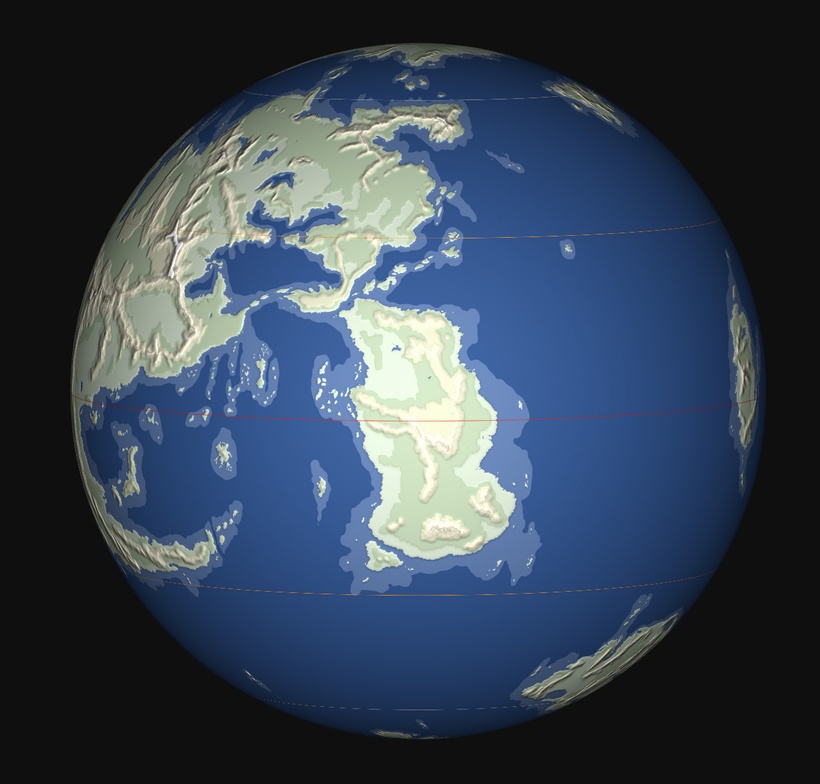 Hepmonaland just south of the Flanaess is the only other continent that is reasonably well mapped in the Scarlet Brotherhood. I've added some more small islands around it to make it a bit more realistic. Some further refinement of the coastlines are probably called for, they are a bit too sterile for my taste. It is a midsize hot continent that spans the equator into a dry south creating an African like environment but on a smaller scale. 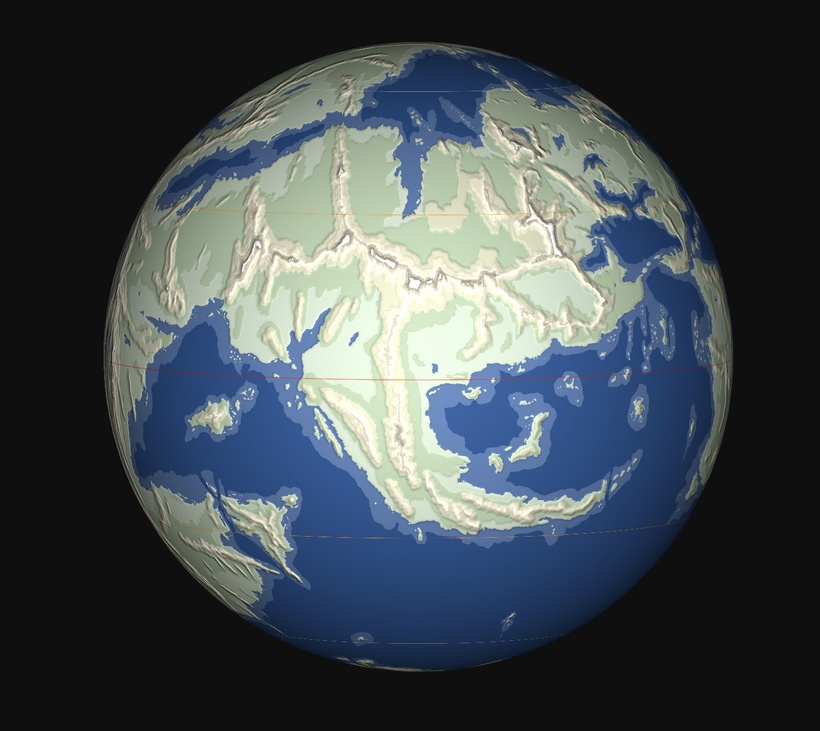 South Central Oerik  features  Oerth second biggest Mountain range that divides the central continent into three areas, the Baklunish basin that we are already familiar with the eastern part that we call the Baklunish West and southerly regions. The curved southern peninsula really needed to be broken up, the banana shape was terrible. It might need more  work before its good enough, w'll see how it holds up in the discussion. 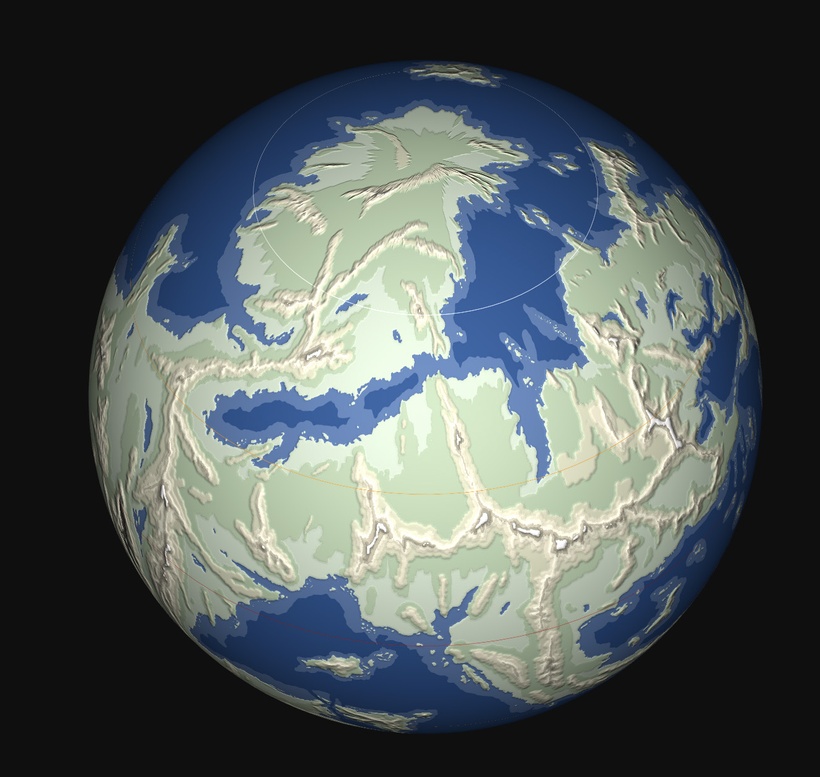 A very interesting region that according to DA1 is one with the polar region preventing the Dramidj Ocean from forming a northern global maritime route. I've kept this land bridge creating a pathway for polar creatures reaching south and vice versa, a good place for mammoth hunting!

Due to the larger axial tilt of 30 degrees temperate areas get squished between bigger poles and more expansive tropics so land real estate at these latitudes are very important and a land bridge stops the cold currents from circulating and staying cold.  Keeping the land bridge adds to the land and a shallow enclosed sea keep the water a bit warmer giving the area a boost. 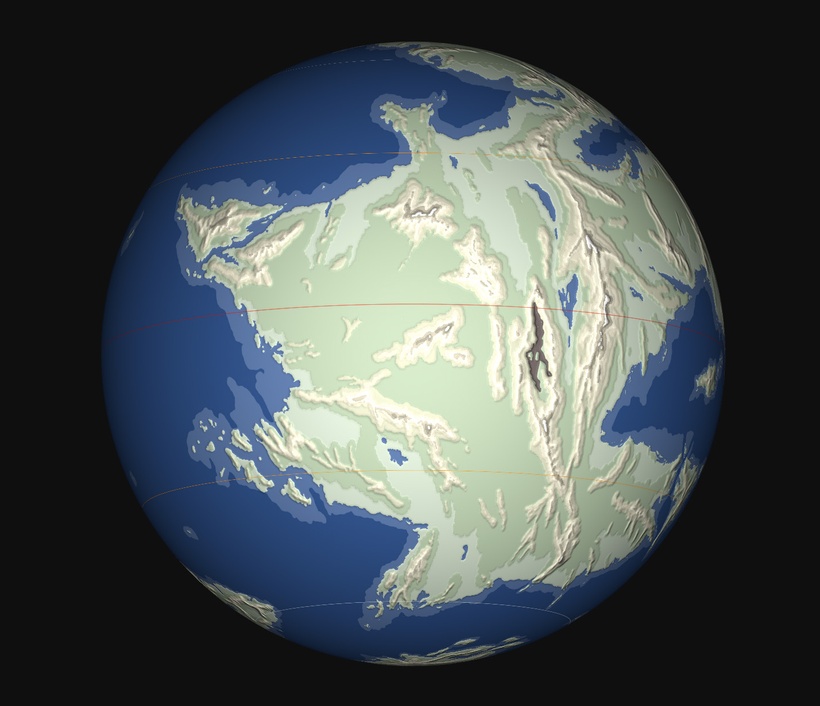 Western Oerik, Oerth's big place, and that is giving it a blend of features we recognize from both Afrika and Asia and more. It is defined in the east by Oerth equivalent of the Andes, a north south range separating it from the Central Oerik. To make this was lump of land more interesting I've added a rift valley west of the eastern divide creating a couple of huge inland lakes, that might be fresh, salty or just dried out salt flats. West of this is a second range of highlands with the biggest rift on the planet, a it more than four times the size of the Rift Canyon.  This is an huge dry interior worthy of a Dark Sun like campaign, or a place for Dragons to come to nest or wait for their eternal rest. Several massive mountain rages in this part gives it climate and terrain variety with lots of interesting opportunities beyond dry hot deserts.

The western central  part forms a tropical plain with Oerth's largest tropical plains. The northern end reaches beyond the plain with a coast and peninsula that I'm sure some sort of creatures have settled!

Western Oerik reaches al the way to the southern arctic circle adding the was variety of different biomes on this end of the continent. 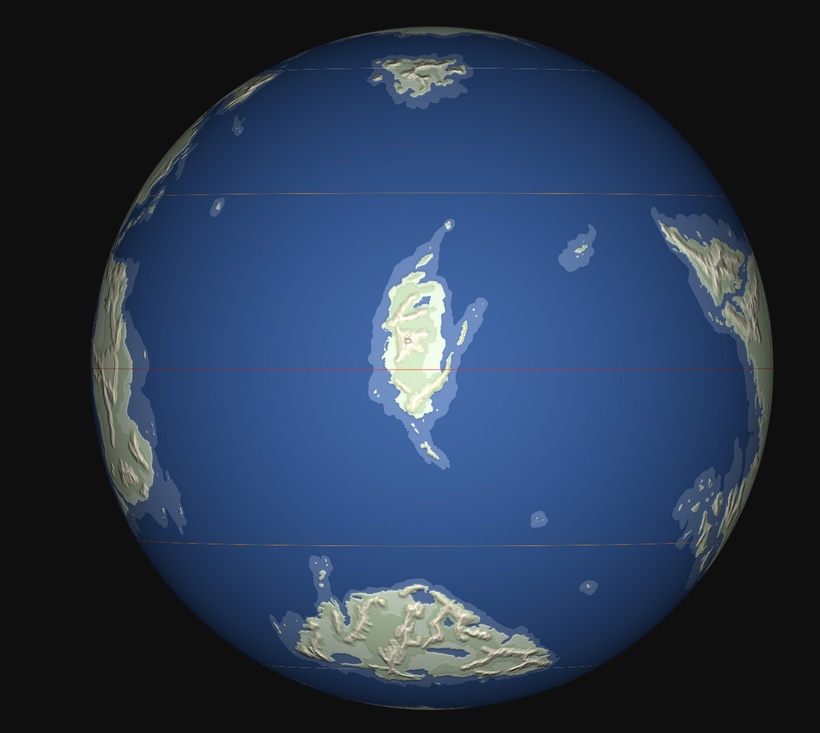 In the middle of the Solnor Ocean I've placed a small continent as an homage to Empyrea, Frank Mentzer's part of the planet he was given the right to develop. It is a tropical place with jungle and rainforests, but I added several mountain ranges and a really tall massive in the center to provide a number of different biomes to make it interesting. 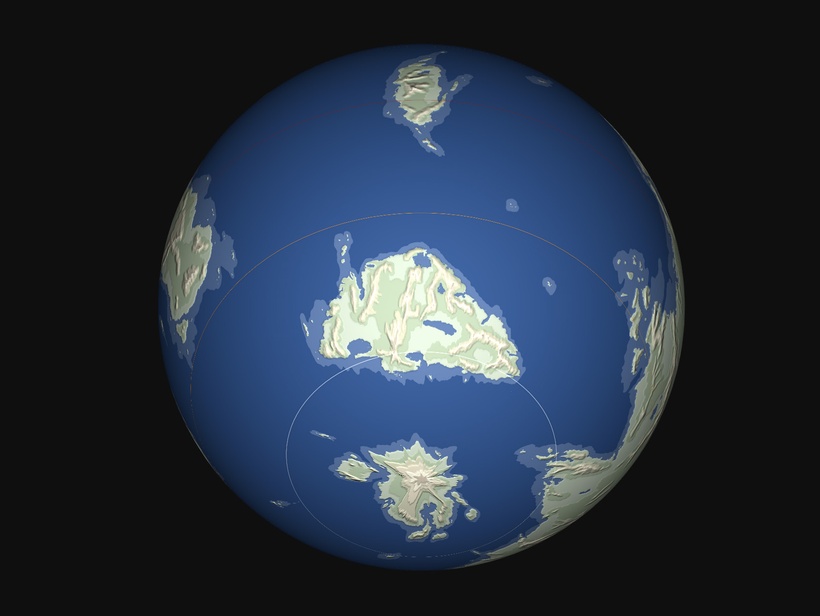 A Great Southern continent is said to exist, and if you look carefully at DA1 map you can see it hinted at bottom right.  To add to the precious temperate resources of Oerth, and to make room for Empyrea, I placed it touching the southern polar circle giving it a god range of possible biodiversity. 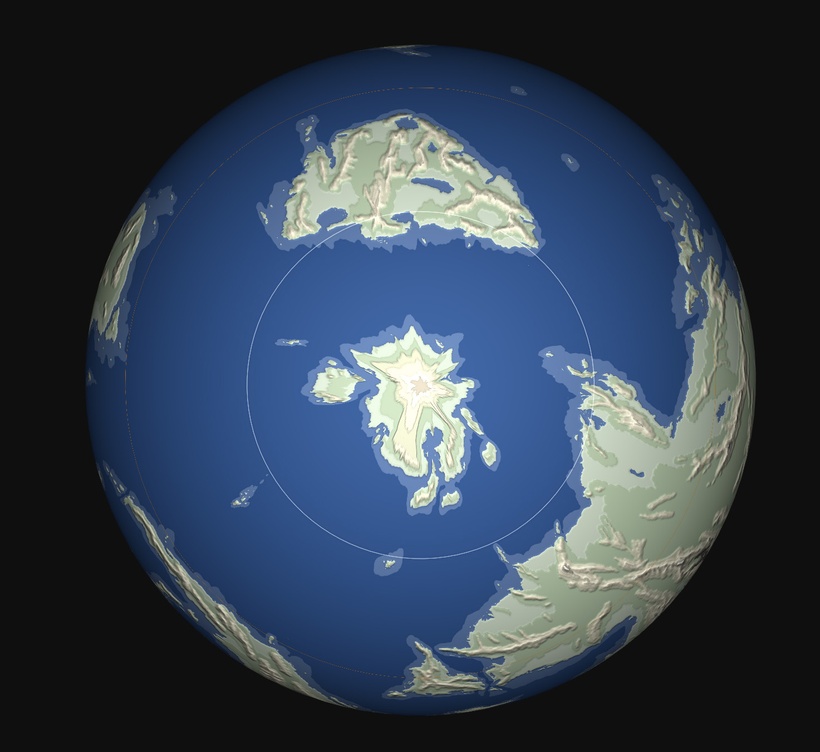 The South Pole looks a bit too star-shaped due to Map 2 Globe's quick render. This needs to be mapped properly as a separate project. I'm thinking of keeping a center mountain, might be cool with a huge volcano jutting out of the ice, and maybe it  is an opening to a hollow Oerth.... 😉

This was a short presentation of my thoughts and approach to mapping Oerth. This is still a work in progress, and to be able to evaluated it better  I'm working on a climate map using Köppen Classifications. 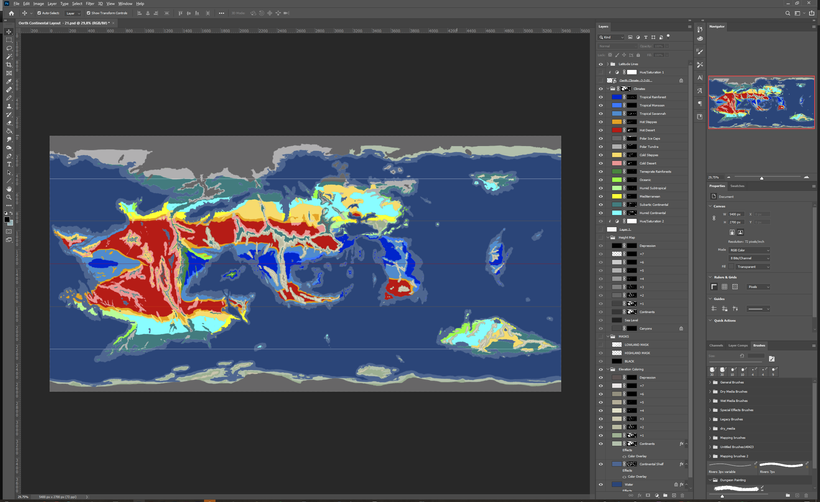 You can create the globe at https://www.maptoglobe.com/

Use this image for texture: https://www.dropbox.com/s/clf737d1kbbh2qc/Equrectangular.jpg?dl=0