First a heartfelt thank you, for all the wonderful and encouraging feedback you have given me for the first Oerth Continent post!!

This second instalment will be a look at the climate of Oerth and the Flanaess using a slightly simplified version of the Köppen Climate Classification. For this part of the project I've had help from a friend of mine who has working with oceanography and she has helped me explain how the oceans of the Earth works and what could be the case for a planet like Oerth. I've also leaned on my weather knowledge from having been a pilot and especially my long distance glider piloting which relies heavily on understanding weather patterns. Wikipedia and Artifexian's YouTube channel have been very helpful is applying this knowledge onto a fantasy world. I'm not an expert on climate matters, but I think I have enough understanding of the topic and knowledge of the Greyhawk setting to  feel qualified to create a model of the planet that can be both useful and inspiring for Greyhawk fans who want to expand their campaign horizons.

A key guiding principle for this project is to try and create a planetary model that can work as a canvas for both the published stories we know and love, and an inspiration and help in creating new stories from other parts of the planet Oerth.

Below is an image showing what the climate looks like for Earth. 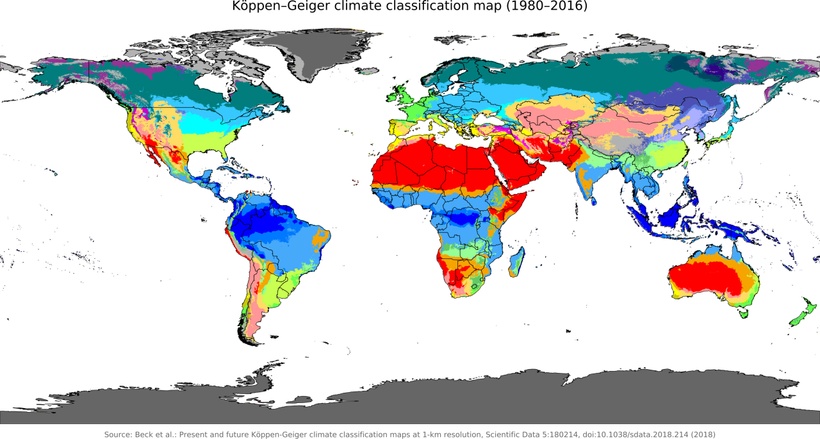 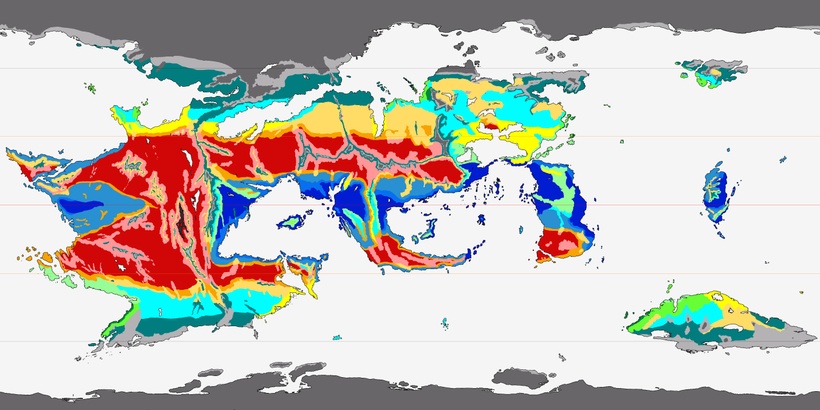 Several differences are striking, Oerth has way more deserts of both the hot and cold variety. This is due to mainly the larger single continent and a larger axial tilt. Larger continents tend to heat up away from oceans and the increased axial tilt exaggerates the tropics and poles, and on Oerth the Tropical Circles are at 30 deg N and S instead of the 23 degrees on Earth.  The same goes for tropical rainforests and should have been the case for savannahs, but due to the dryer larger continent, ocean currents and mountains the savannahs are not as widespread as the could have been.

Here is the classes and the temperature and precipitation characteristics 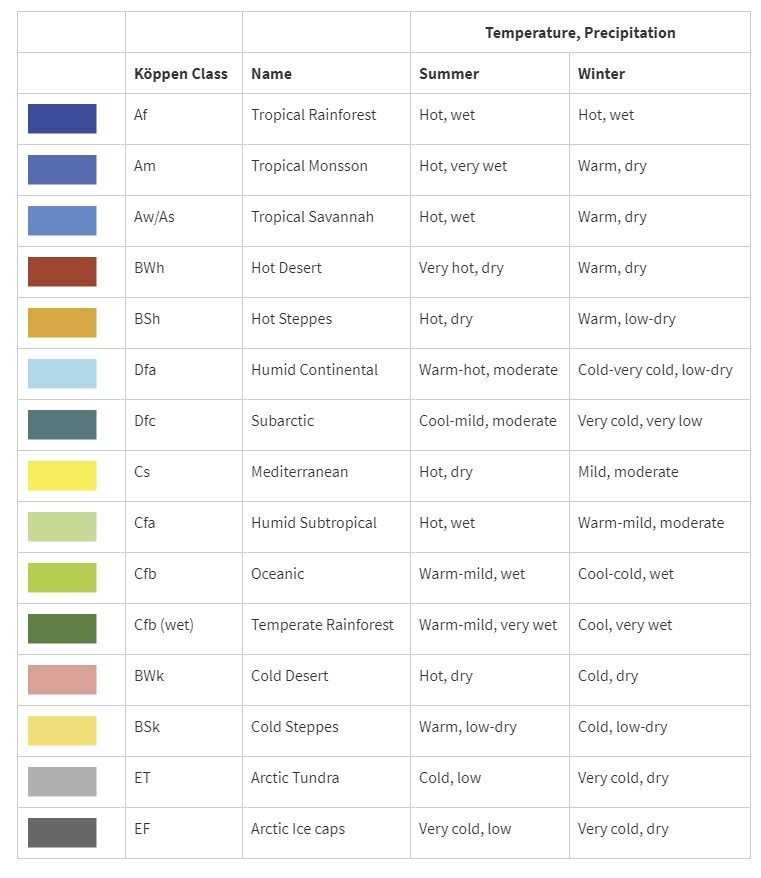 Before we go into the details a brief discussion on climate science and how I have used it in my Oerth model.  Climate are influenced by a myriad of things but since this is a fantasy world we can simplify things to aspects that can be more useful for our games. I've chosen geography, meaning where on the planet a region is located, ocean currents and general wind patterns. 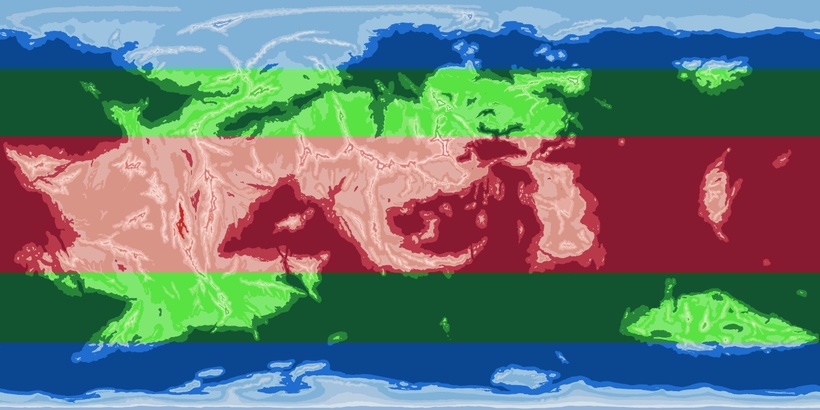 The actual climate varies with airflow, ocean currents, humidity, and in some cases magic or other fantasy factors climatologists in the real world don't have to deal with. I've tried to keep them to a minimum and there are only one clear case of this and that is the Bright Desert, and even there it is only marginal as we will se when we get there on this journey.

Next up is to take a look at the global ocean currents and how it distributes heat and cold around the planet. Overall Oerth have a 57.56% land and 40.98% ocean (including major lakes and inland seas). Oerth's larger land area is all due to the landmass covering the north pole, apart from this difference the water land ratio are similar. 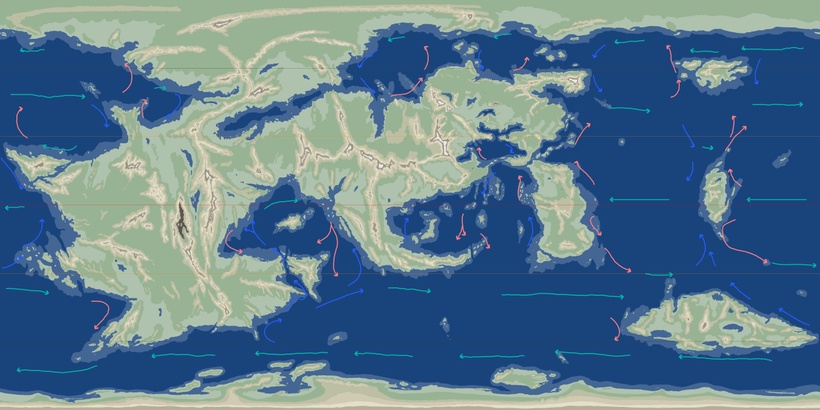 Due to planet rotation and size ocean currents form large rotating gyres, and on an earth-like planet (size and rotation) it will for two gyres N and S of the equator respectively. The can be likened to gigantic cogwheels that move the water around in the large oceans, where they form and how large they are are due continental layout. If we look at the Solnor Ocean north of the equator we have a clockwise gyre that carries warm water and humid water up along the eastern coast of the Flanaess making it both warmer and wetter way far north than would otherwise been the case. 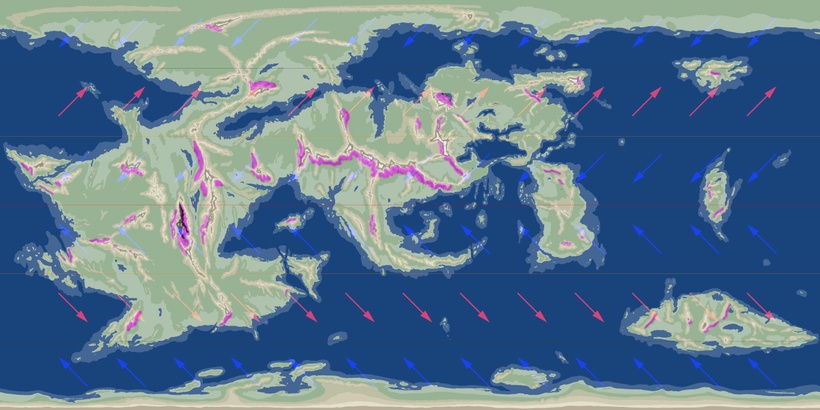 Winds are affected by planet rotation and temperature, and form bands of similar airflow across different latitudes. This is very obvious on giant planets like Jupiter and Saturn, but the same mechanics apply to smaller planets as well.  The bands of winds mixes heat and cold across the planet, bringing warm from the tropics into temperate areas, and cold from the arctic south into temperate areas. These wind patterns are persistent enough to create typical weathers in different latitudes.  Low pressure and humid along the equator. High pressure, dry areas north and south if of this create deserts on the edges of the tropics. The temperate zones are dominated by low pressure, humid and windy conditions, and the arctic see mostly high pressure cold and dry conditions.

I've done my best to try and take all this into account creating this climate model of Oerth. It gives a rich and varied planet to explore with lots of contrast and every climate zone we have on earth is present in significant areas on several locations. 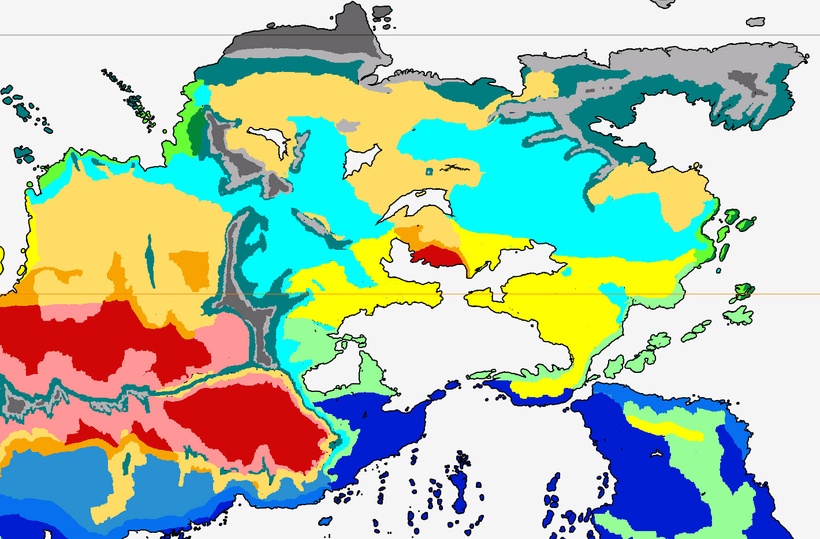 The Flanaess has a rich climate diversity, from frozen arctic in the Black Ice, Yatils, Crystalmists and Corusk Mounatins. A band of boreal subartic from the Barbarian lands in the west to the Thillonrian in the east. Cold steppes stretches from west of  the Fler river to the northern shores of the Nyr Dyv, and are again forming a large part of the North Province.  A temperate humid continental climate reigns over lands from the Baklunish coasts in the west though Ket and much of the central western Flanaess. East of the grat lakes and the steppes are yet another large stretch of humid continental temperate climate. Each of the coastal areas of this temperate belt have wet humid conditions giving rise to rainforest on the north western slopes of the Yatils in Ekbir and showers the islands and cost of the Solnor with rain and warm winters. This is an effect not from magic but warm currents from the south and humid warm winds. It is only a local phenomenon in Ekbir but the much warmer currents on the Solnor warms up and humidifies and much larger area from Hepmonaland to the Sea Barons.

The lands around the Azure range from humid subtropic in the west and south to Mediterranean in the north and east giving it excellent living conditions, among the best of the planet in fact, so now wonder that it it has a large population and developed countries. Mediterranean, subtropics and warmer part of the temperate areas are the most prosperous climates to live in for humans and similar creatures dependent on agriculture. The Sheldomar Valley and Flamni basin are prime examples of good areas for empires to develop in.

Most of the Baklunish west are dry steppes that get progressively hotter and dryer the further south you get, which give much less support for civilisation to grow.  There is a bad along the cost of the Dramidj and the western slopes of the Yatils all the way to Ket that the Baklunish have been taken advantage of and make a good living in.  The far western end of the Dramidj is another example of good climate conditions for humans (and similar creatures) to thrive, giving DM's plenty of lands to develop civilisations in.

Apart from the Flanaess and the western Dramidj I see four main areas for bred baskets, the north western Oerik hava long coast and a peninsula with excellent conditions for settled life. The south western Oerik have a long subtropic coast and temperate lands next to it with a wet oceanic part in the south, like the Baklunish coast in reverse. The south eastern cost of Western Oerik is also a great place to settle with a drier Mediterranean coast and temperate interior. The northern end ready for your Eryptian civilization, with deserts as well as a fertile coast and south.  The large southern continent gives Oerth a huge expanse of land in the temperate zone with great potential for agriculture, plus a cold wild southern interior and coast.

Western Oerik gives Oerth several deserts, a huge expanse of tropical savannah, some of its tallest mountains ranges and the biggest canyon on the planet. The mountains and inland seas gives it a wide range of climates in a close proximity, from glaciers, tundra, boreal forest to hot deserts in only a few days journey. Like a big version of California, Central Asia and Africa all in one.

There are lots more to look at when it comes to Oerth and climate, this is just a first look and I'm intrigued by all the possibilities! 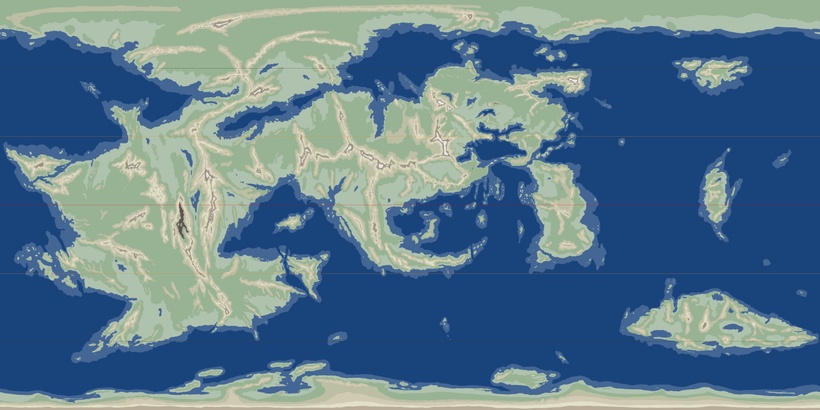