After a lot of technical and tedious parts its now time for a more interesting step in mapping the southern Shield Lands, Civilization. Roads, agriculture, buildings and the other marks of past and current inhabitants. At the resolution of 5ft per pixel far from everything is visible but almost every type of building is big enough to be seen alongside most of the agricultural footprint. In order for make a detailed map like this, not only the current  inhabitants needs to be taken into account, both geological and the history of the inhabitants needs to be looked at. In a fantasy world there are lots of potential inhabitants to keep in mind.  I'm using my campaign setup as the go to for this  first test area that will stretch from Critwall to Axeport and about a hundred miles or so north from the Nyr Dyv coast. It will be divided into 15-20 tiles each 15 x 15 miles, each covering 225 square miles. With some overlap it is still a sizable piece of land around 3000 square miles.

All the maps shows here are very much a work in progress and are only screen shots from Photoshop. Trees and bushes will be added, the texture finalized and then everything rendered properly to really shine. This post is mainly about the placement and stories of the things I'm adding to the map. 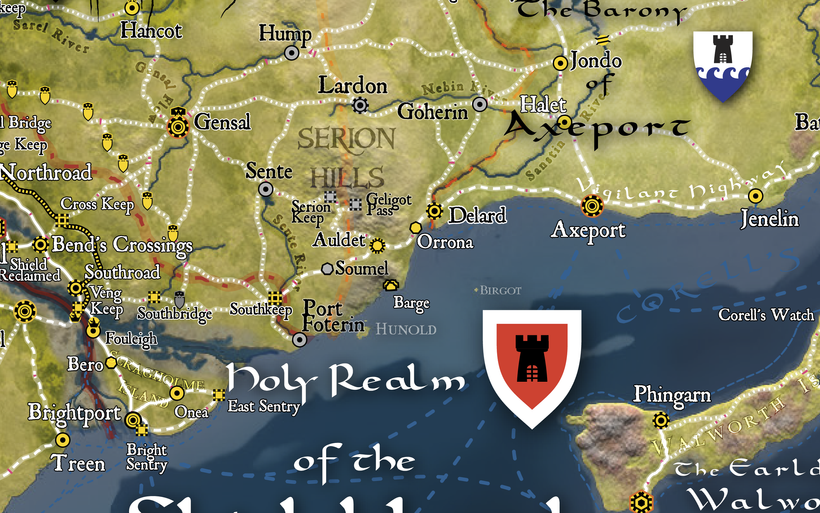 The real world we are living in are so shaped by human civilization that is is often hard to imagine how world without a large highly technical human population would look like. Most of the temperate forest and grasslands a long gone and only lands that are remote and in other ways inaccessible remain in their natural state. I read an interesting  article about the significant impact of humans on the natural world as far back as 10,000 BCE https://www.pnas.org/content/118/17/e2023483118

The report states that far from all human activities where bad for nature and other species, lots of other species benefited from our early ancestors.

This made me start thinking how things might be in the World of Greyhawk, a with population levels closer to ancient history than our modern world but with powerful magic and creatures with powers beyond our real world. The possibilities are almost endless and each Greyhawk DM can choose to  shape their versions of Greyhawk to suit their games and the stories they want to tell. Here is my attempt to try and tell that story for the Southern Shield Lands, only a few green hexes on the Darlene map but with a more than interesting story to tell. 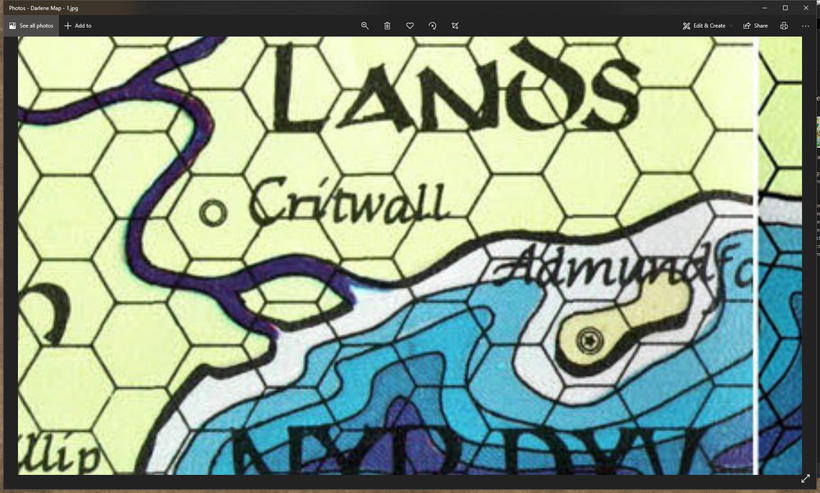 This land started to emerge into its current from many thousands of years ago during the last ice-age when it was a tundra just south of the thick sheet of ice covering the northern parts of the Flanaess. Sea levels where much lover during that time, and so were the Nyr Dyv especially during winters. Each spring huge floods made the rivers grow huge, and when the climate warmed up and the ice retreated large areas was flooded and the rivers were many times bigger than they are today. Nyr Dyv flooded and rose up higher that today for  while and then sink down to its current level and the more familiar coastlines emerged.

When the climate warmed up, the area went from tundra to forested taiga and then more and more deciduous trees took over and the lands that would become the Southern Shield lands was covered in forests, lakes and rivers. At regular intervals volcanic eruption turned the lands north east into turmoil when the White Plume volcano could no longer contain its energy and spewed out fire, lava, rocks and other debris.  This have both devastated and elevated the north east of Shields Land, but for the most part the latest eruptions are beyond the southern coast lands.

When the first Flan ancestors arrived to these lands they were a cold wet and wild frontier ripe for hunting and exploration.  Over millennia that turned into settling down, and the landscape is started to change due to human presence. Logging and farming along with a warming and drying of the climate, transformed the land from forest to mostly grasslands and the once mighty woodlands were reduced to tiny remnants of what they used to be, surviving in hills, bogs and areas where trees can grow inconveniently far from loggers  axes. 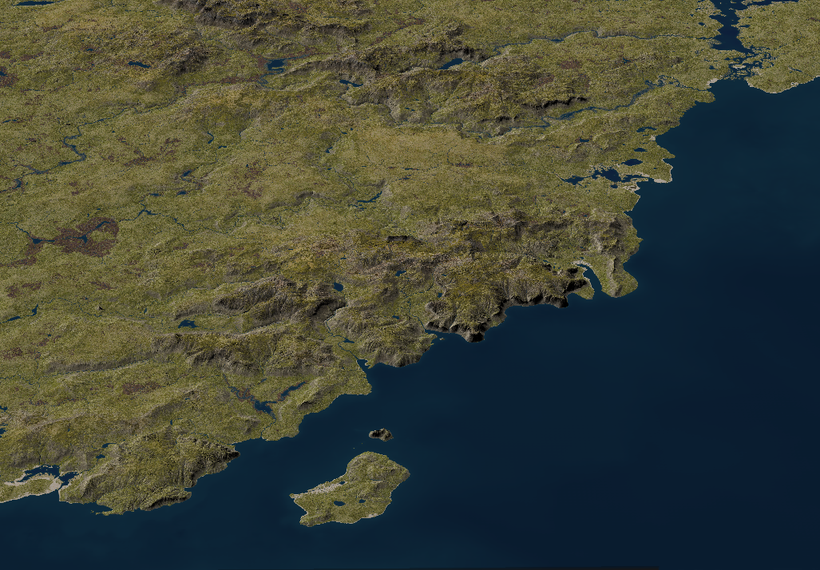 It was still frontier country when the Flan established a fort on the hill along the mighty Veng that would evolve into Critwall several thousands of years later. The precursors of Axeport, Alhaster and Admunfort was established by the early Flan at this time when this was still frontier country, and old ruins from this time can still be found by those who know where to look and what to look for. Like the Geligot Pass Keep (my creation) that once guarded the only easy trek across the Northern Serion Hills (my creation). 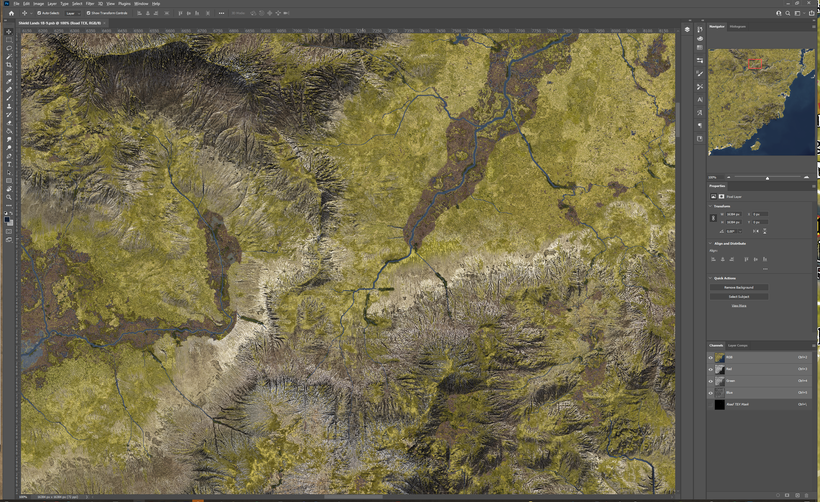 During his wicked rule the area was established as a northern defense line against the even more barbaric inhabitants further north. The Shield Lands was still a fairly wild place with wolfs, bears and more still, an every day occurrence.  Thankfully its role in the evils of Vecna was minimal and life continued as it had for thousands of years. The old faith was norm and druid growths, long forgotten, can still be found scattered around the lands. Ironically it was much later the evil of Vecna was going to be felt  in these lands when Halmadar the Cruel found the hand and eye of the tyrant and established a short but very evil rule. Auldet was then a town in his realm. 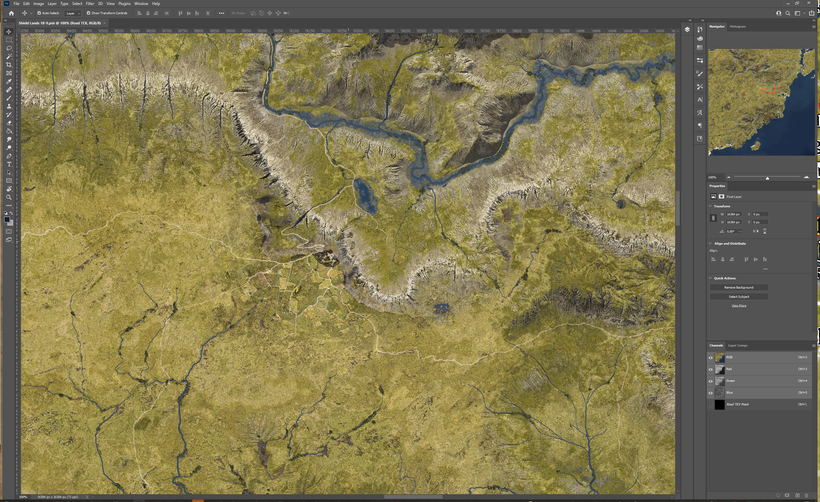 During the great migrations from the west, the first Oeridians started to trickle in. The first wave was mostly transitory as they was seeking better lands further east. So this first wave of Oeridian didn't leave much marks on the land.  That would soon change with the second wave that came hundreds of years later from the east, this time as explorers from the Great Kingdom seeking new lands in the west. Old Flan settlements became outpost and staging points for the expanding Aerdy Empire.  Critwall, Admundfort and Alhaster became cities and Axeport became a large town. Delard (my creation) became a fortified town guarding the bridge across the Sanstin River (my name) 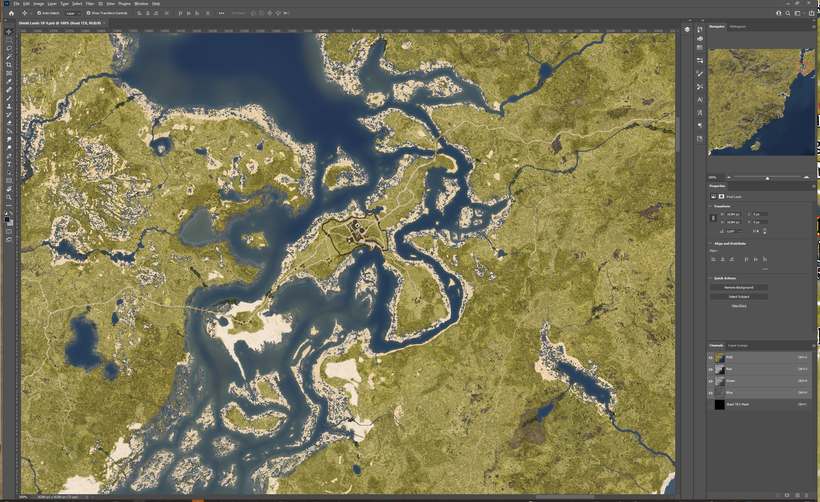 The frontier moved from the Nyr Dyv shores and the Serion Hills (my name) north along the Great Northern Aerdy Road and the Southern Shield Lands turned into a quiet backwater of goats, sheep and cattle with their herders roaming over a landscape dominated by  grass rolling hills and creeks slowly drying out the bogs that where once mighty lakes in the boreal era long ago.

When the Great Kingdom retreated and the distant rulers was replaced with local ones and with that came newfound ambitions. At first these ambitions where set in stone creating new infrastructure and  structures supporting the new order.  Below is Serion keep once belonging to a lord eager to create a symbol showing who ruled here. 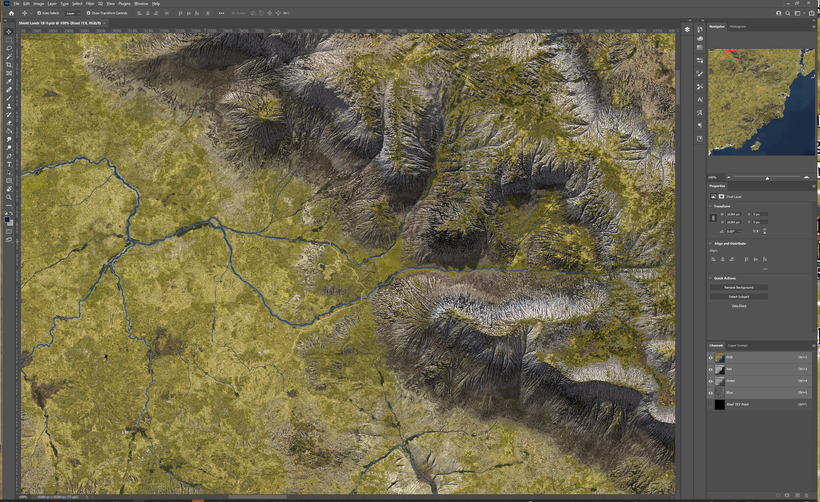 After the initial euphoria the Shield Lands was drawn into a power struggle that is still going on. Settlements that was once thriving are now struggling to just stay alive with mad clerics, roaming bands of warriors of all sides and worse around. Here is Orrona (my creation) a once thriving village a few miles west of Delard, that was once full of villagers fishing for Eel, growing crops and tending to travelers along the northern Nyr Dyv that came as far away as Furyondy and Urnst. Today only a few houses are still standing after the Iuz priests have devastated the place. 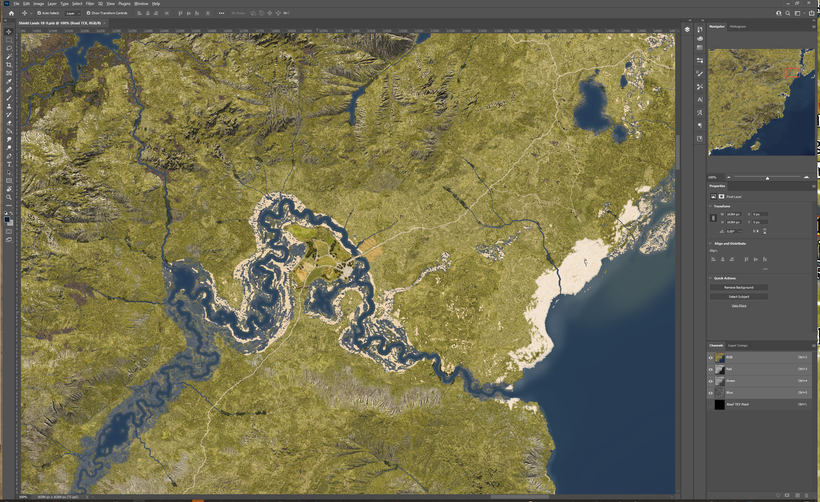 Another such place is the now ruined village of Soumel (my creation), that was once a small community founded around a bridge over a small river on the road from Axeport to Critwall. The economy was once a combination of hosting travelers, a few coins to maintain the bridge, subsistence farming and extracting  peat from the nearby bog.  Iuzian priests and other roaming thugs made both the travellers and villagers disappear and the village now sits mostly undisturbed except when either Iuzian or Shield Land forces camp behind its stone fences, once laboriously created to keep cattle and sheep protected. 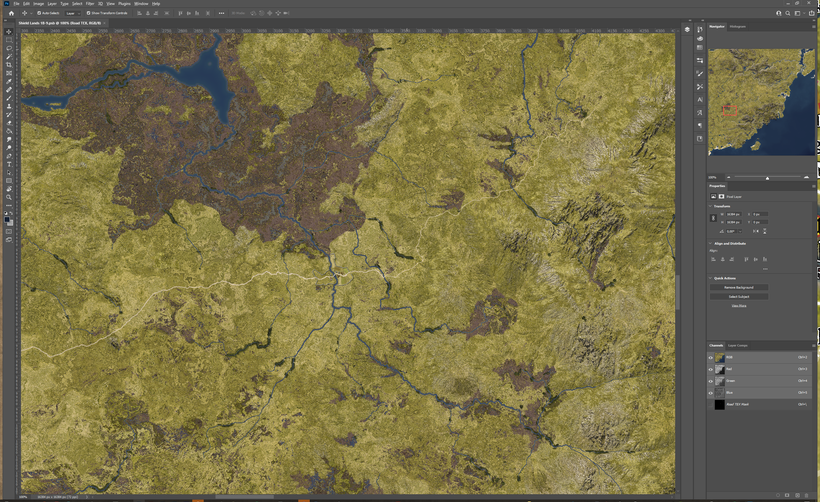 A tiny settlement of squalid beach huts can be found along the coast a few miles south Delard. These used to be occupied from spring to fall by poor but entrepreneurial Shield Landers who hunted and gathered what could be found along the Nyr Dyv shores, and the shallow bay with its extensive wetlands where good hunting and fishing ground. When fall came they retreated to more sheltered accommodations, bringing with them whatever meager treasures gained from the summers activities. 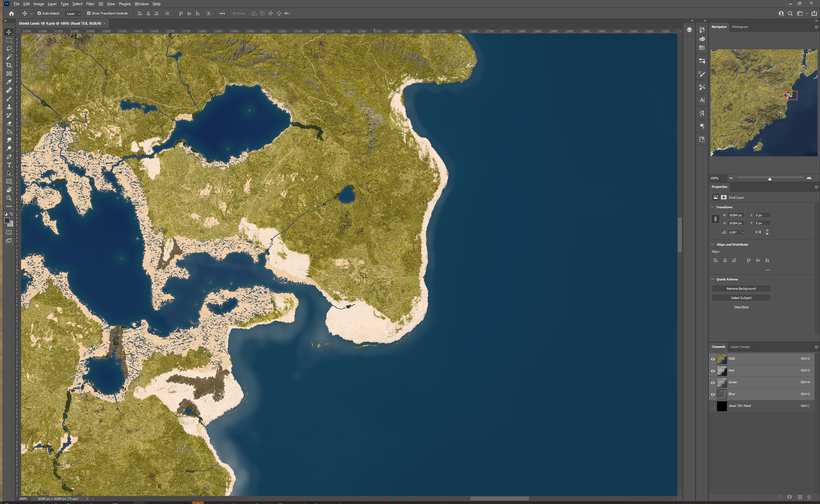 During the war this also became a refuge for those who wanted to have a base in the Shield Lands where it was bot easy to come and go using boats and to hide in thick reeds. A combination of old and current affairs have made small un organized settlements like this exist in several places along the coast away from the eyes of the occupiers.

All these places are within an area roughly a quarter of a Darlene map hex, and its far from all there is, only what I have had time to add in using Photoshop. Left to add are Old Faith druid growths and gathering places, and a dark one as well, a couple of slate mine sites,  a few more villages and ruined keeps. These are places of my story, what places would you put here to tell your Greyhawk stories?

Next it is time to add work on the few forests that are there and touch up the textures. What we see here are still mostly raw renders, and they need some TLC to be really useful. More on that in a future blogpost. Now I'm going to look into Ice Age Oerth!

Thank you everyone for your support!