I missed the deadline for this post, both due to a project for Griffon Lore Game that needed to get started and also due to my almost unhealthy obsession with detail.  Forests and texture editing took longer than I thought and I have now spent almost 100 hours in Photoshop editing on this map, half of that time trying to figure out the best way to do it so it should be considerably less on future maps in this series.  I still have another twenty or so hours to go before it is ready for the final phase of 3D rendering.

I'm very happy with it, a super detailed take on 225 square miles of the Southern Shield lands  seen at 5 feet per pixel. It includes roads, buildings, fields and more in over a dozen settlements. I have made most of them but a few remains to be added. This is the texture plus shading making it the top down map that will be used together with heightmap and masks to create the 3D map.

Roads, buildings and even trees are on separate layers which mean these features can be added, changed or removed as needed. The texture itself can be edited to suit new conditions like seasons, climate change and calamites like fires and things that leaves marks on the landscape.

This project have made me push boundaries and  forced me to learn new tricks to try and create believable, useful and inspiring terrain at this level of detail. The results are better than I hoped, but also shown me areas that need to be improved to improve the process.  Especially forest placement is way too tedious to do by hand, I need to spend some time to workout a process to make a better starting point for forestation that can then be edited here and there. Now I basically did it all by hand in photoshop. The same goes for wetlands, they can also be done more by fractal to speed things up. 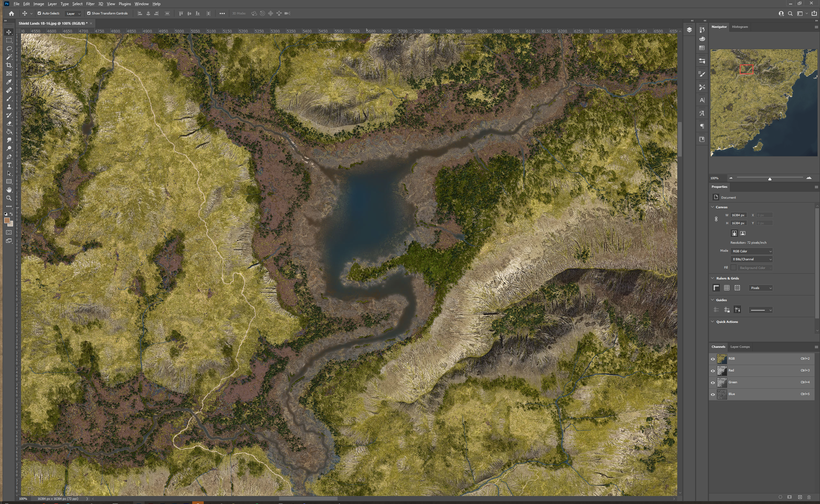 Forests and wetlands are often linked in this landscape. Most of the area is too dry and not fertile enough to facilitate tree cover, this is due to both a drying climate and millennia of logging. The original forests still covers hills and difficult to access areas., with new generation of trees have started to conquer the bogs. First hardy evergreens like pine and spruce, then more and more trees cover the former lakes as the bogs looses its acidity in its late stages. When the bogs dry out completely the tree cover slowly disappear transforming the bogs into flat grassy plains. I've tried to depict this on the map by having lakes  and bogs in all stages of transformation. It also gives an interesting landscape for adventuring with  lots of features spread throughout the area. 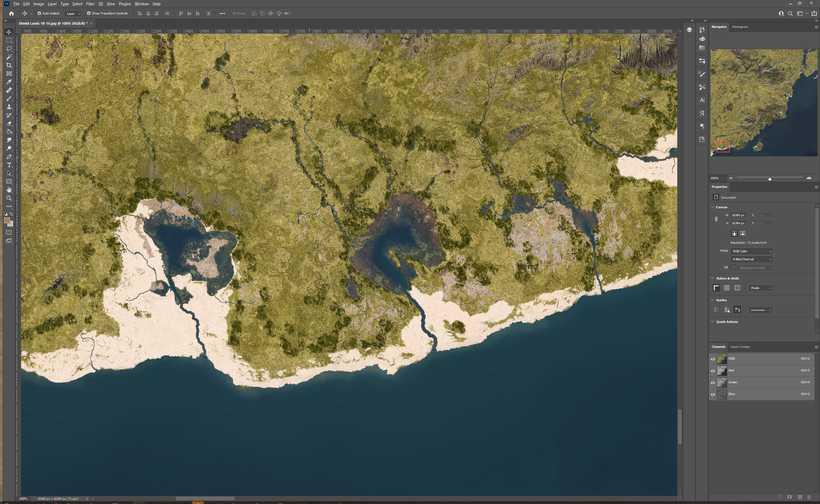 I hope you like this first take on detailed area maps, I definitely want to make more of them, lots of areas of Greyhawk would be interesting to map in this detail.