Previously we looked at the "normal" Oerth and then a Cold Oerth gripped by an ice age, now its time to look at the opposite Oerth scorched by a scorched climate a bit more than ten degrees above normal. This model is a bit more speculative than the normal or cold, science on ice ages are a bit more developed, but due to our real world changing climate knowledge of a hotter climate is increasing fast.  So lets take a look at our World of Greyhawk in a more fiery age. 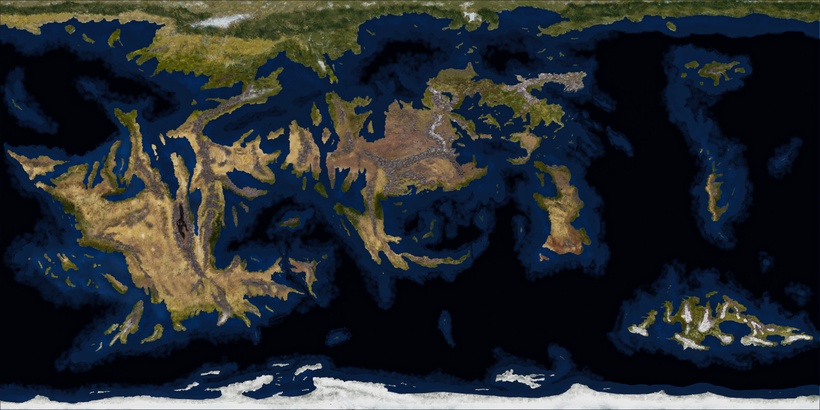 Large parts of Oerth are in this scenario uninhabitable by all except the hardiest of heat loving creatures.  Four large  and a number of smaller areas are turned into extremely hot deserts that will quickly kill most creatures that lack protection from the heat and sun. The biggest of these desert are as usual in the Western Oerik and it has made the interior of Oerik a hot hell home to elemental creatures, Red Dragons and others who not only survive but thrive in this inferno. 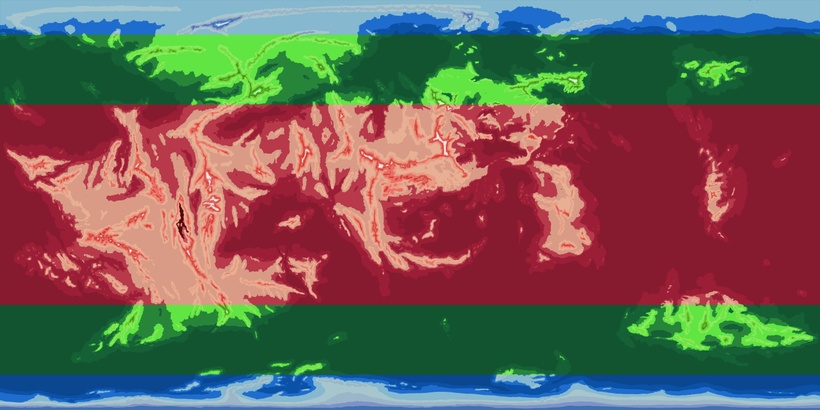 The situation is not all bad, the increased global temperature have melted almost all the glacial ice, that Oerth has a lot of even in normal times, and way more of it are on land rather than on water. So when all that ice melts it will raise the sea level by hundreds of turning most of low lying land into shallow ocean. This means that some areas that used to be desert now enjoy a much more pleasant coastal climate even in the hot tropics.  Oerik is broken up into a western and an eastern part with a number of large island in  between opening up for seafarers in a way that makes global shipping possible almost everywhere from the poles to the tropics. 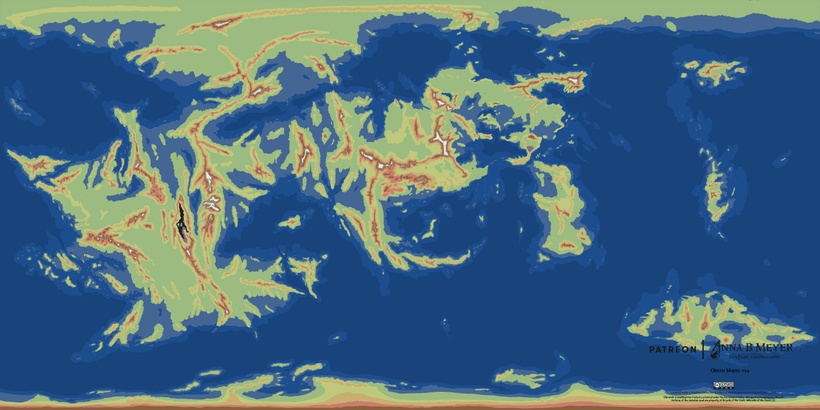 Our beloved part of the world hold out well in this scenario, large parts of the central parts are now a shallow ocean and the Cairn Hills are an island in it. The Howling Hills are close to the coast covered in lush forests just like the rest of the lands from the Dramidj Coast  in the west all the way to the northern Thillonrian who now sits firmly in the temperate belt. The northern Great Kingdom all the way up to Ratik is now Mediterranean and the southern part not under water range from savannah to tropical on the coast of Sunndi. The Wast Swamp are now a flat dusty salt plain in a small but hot desert formed in the Sunndi depression.

Western Sheldomar Valle are now a dry hot et of hills overlooking a large ocean inlet stretching all the way up to the borders of Bissel. The Crystalmist Mountains are high enough to stretch into the sub arctic and are now home to a large evergreen forests. The Baklunish lands range from very pleasant in the north to a scorching hot desert  in the Dry Steppes making normal life south of Kester almost impossible.

The Amedio sit right on the hottest latitudes and except for the cooler coastal lands is now a desert. Jump over the Hellfurnaces and the Sea of Dust is even hotter desert, probably one of the hottest on Oerth. The Suel will have a tough time in this scenario, but so will the southern Bakluni as well as large part of Hepmonalanders. Mostly desert is what the hardy Olmans and Touvs have to face, but thanks to its coastlines there are still savannahs and even rainforests along both the west and east coasts.

This is a scenario that should please most Firelanders turning it into something like a volcanic and more mountainous Ireland.  Getting here from the mainland should be easier as well since you can use the north polar coast that are now home to the largest Boreal forests of the planet. The relatively flat north polar area is almost devoid of glacial ice and now accessible for most of the year opening up northern areas for settlement and travel.  Huge tracts of lands north of Western Oerik can now be home to whole civilizations, since it rivals the Flanaess in size and now has a cold but temperate climate.

The great southern continent have shrunk a bit due to the higher sea level but sports some of the most inviting climates on the  planet. A tropical ocean between the two halves of Oerik has taken shape with a myriad of tropical islands along its many thousands of miles. One can imagine a ruined city on a hill in the middle of the desert that was not too long a go a coastal metropolis catering to the trade north and south between Western and Eastern Oerik when it was a warm sea full of life. On our normal Oerth it is just a wast hot mainly flat desert, but with a bit of geographical history you can get inspirations to very interesting stories.

Take some time to study the differences between this scenarios, see if they could fit into your campaigns timeline somewhere  in the past, or future, and I hope they can inspire you to come up with interesting things to add to your games.

The next installment in this series will be a look at where the most stable conditions on Oerth are to be found, so if you want to set up a civilization where are the best spots.

Thank you again for your support!!