When I started my Oerth planet model project it was to try and place the Flanaess position on the globe for my transition to use GIS. Then the more I got into mapping Oerth the more interested I got  and starting to see possibilities and overlooked connections with the familiar stories of our favorite game setting. The geographic dimension of most fantasy setting seems to be rudimentary at best and Greyhawk follows that tradition of taking geography lightly and as a "mood setting backdrop" rather than a key aspect in shaping the stories. Science is telling us that the planet and its geographic aspects plays a central part in shaping all life, I think that should be the same for fantasy worlds as well and this project have given me a good opportunity to  do some "Oerthly fantasy science"! 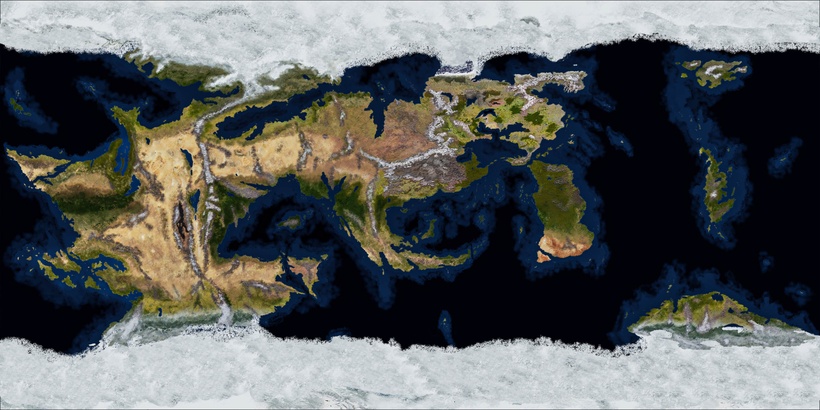 I've modeled the planet as I see it during the time of the Greyhawk campaign in the late 500's CY, as well as an version of Oerth in an ice age as well as during a hot climate. When and if you want to make use of ice ages and warmer periods in your campaign history will vary, but if you do there are some very interesting possibilities present themselves.

Almost all fantasy setting comes with mysterious ancient cultures present in relics, sites in remote places and monuments hidden away in now inhospitable realms. Why these civilisations choose to build in the far off hostile regions  the stories rarely tells, and here I think a geo-historic approach can be very helpful in both inspiring and explaining  stories like who built the cairns in the Cairn Hills for example. So lets take a deeper look at what Oerthly geography has to offer! 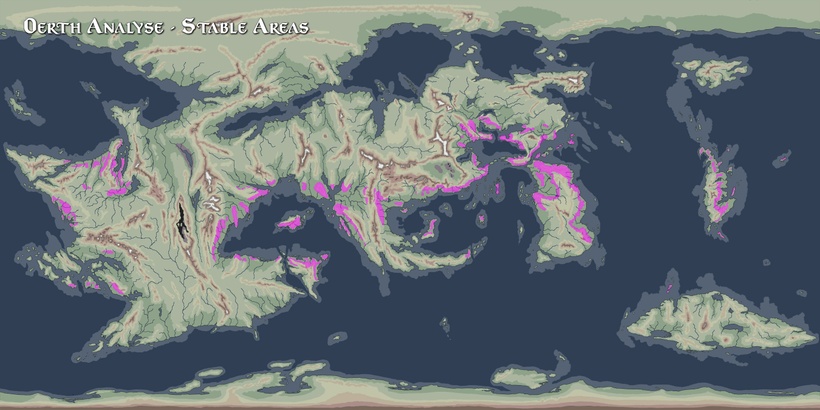 Civilizations need favorable and stable conditions to persists over long time to develop and thrive. In the map above I have marked out areas that are the most favorable over time for human like habitation, having a non arctic and non desert climate, and that are not prone to flooding in times of higher ocean levels. Interestingly the southern Flanaess, northern Hepmonaland and parts of the Amedio are well represented. This makes this region a prime candidate for the earliest civilizations, so maybe there are something into the idea of a human origin here evolving into Olman, Touv and Flan cultures.

With the data of were the best long term areas for a human like civilization are, lets plot out good locations for city building in these areas.  Access to waterways are a key fact in this, and below is a map where I have done this for Oerth. 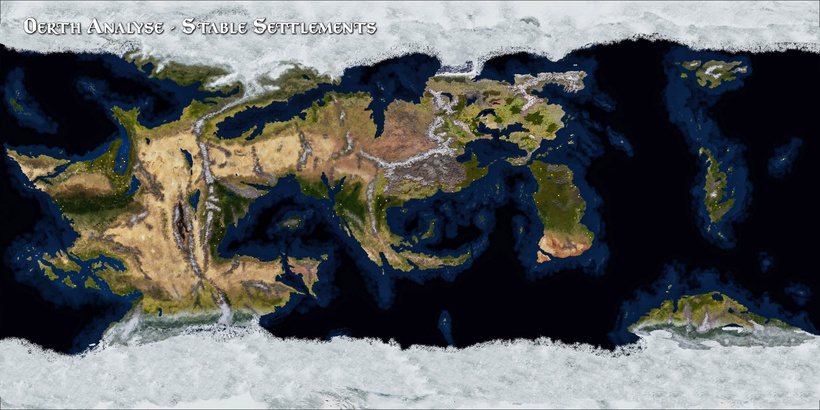 A number of familiar locations show up, like Greyhawk, Chathold, Prymp, Rel Deven, Irongate, Pontylver and Lo Reltarma. It might not be a coincidence that the eleven cities of  Enstad, Courwood and Tringlee all are in this very stable and favorable location, the long lived elves could very well have used heir historic knowledge. Today there are many other places in the Flanaess that are better locations for a major settlement, the strength of these locations are  that they remain usable even in the case of a drastically changed climate. Lets look into how a hotter and colder climate will affect settlement patterns across Oerth beginning back in early human history and try look at Greyhawk history from a geographical perspective. 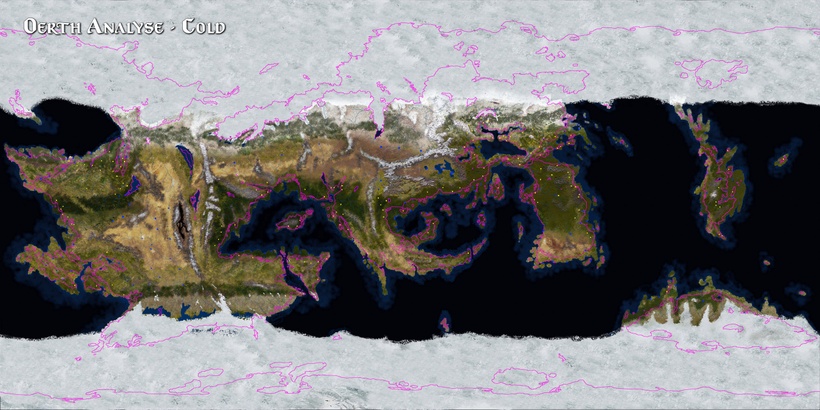 Cold periods in history gives primitive humans and other civilizations new opportunities to expand across the planet in areas otherwise inaccessible, ocean levels are much lower creating land bridges, and the deserts are both smaller and less hot. Early hominids can begin spreading west and diversifying, this early ice ages is the first time of migrations, land migrations due to both lack of technology and large parts of the ocean are frozen over.

Then the Oerth climate begun to heat up... 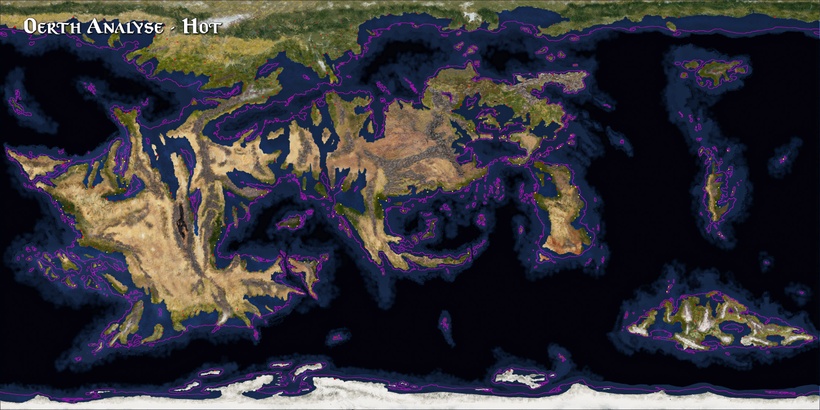 A new world emerged where the oceans opened up and the land was often turned into scorching hot deserts. The western humans turned to the sea and migrated away from the heat towards the newly opened up north. A seafaring culture was created around what is now the western Dramidj, and back then is was connected to the tropics across oceans that have previously been deserts and steppes. This is the beginning of the Suel, the first great sea farers of Oerth. The Ur Flan where happy ruling the best lands on the planet with scant interest in exploring other parts of the world.

The Olman world was thrown into the sea, literary, and large parts of what was left was turned into desert. This delt such a blow to Olman development that they haven't really recovered from it since. The Olmans of the southern Hepmonaland was isolated giving rise to a new off-shot culture, the Touv. The Touv used favorable winds and ocean currents to reach both the great southern continent and Mentzeri in the middle of the Solnor.

The people that lived along the northern coasts of what would become the Baklunish lands enjoyed a favorable climate but the expanding gulf of Ghayar separated them turning them into the precursors of todays Baklunish and Oerids, the Bakluni ancestors on the wester side and the Oerids on the eastern.

Life like this went on for a long time but big changes where coming, winter was coming. Oerth was dragged into a new ice age with a cooling climate. This meant problems for some and new opportunities for others.  the first to be hit by the oncoming cold was the Suel in the far north. They were forced to relocate south and came into conflict with the Balkuni, and to a lesser extent the Oerid that held lands further east. This meant hard fought battles for survival and the Suel was the less experienced in land warfare and was often driven to flee. The Suel fled in two directions, one smaller group of eastern Suel settlers along the Corian polar coast decided to try their luck and fled eastwards to the Thillonrian Peninsula and ended up occupying a group of larger islands in the northern Solnor east of mainland Flanaess that where exposed due to the sinking ocean levels. This group would later colonize the Thillonrian  when the climate warmed up again.

The main part of the surviving Suel ended up on a plateau south of the Suel that was turning from being a desert into fertile lands with a set of large lakes and decided to stay. They would form the pinnacle of Suel civilization over the next 5000 years, but their memories of the wars with the Baklunish would remain in their tales...

The Oerids and the Baklunish divided up the  tundra, steppes and huge forest of the Baklunish basin. The Oerids had their back towards the glacier covered Yatil, Crystalmist and Sulhaut ranges develop a fierce stance towards intruders so the Bakluni opted to spread west and south instead.

In the Flanaess the Flan now came into their cultural zenith developing large settlements and a multitude of large and powerful realms whos names have survived all the way into modern times. Conflict broke out with the demi humans and the Olmans in the south and a darker warlike side took hold.

Then winter began to ease its grip and the Flanaess we recognize is starting to emerge. The Balkuni had picked up strength and numbers in the west and south, and when the lands they where living in again turned to deserts, they moved north to reclaim their ancestral homelands. The Oerids were surprised by the renewed vigor of the Bakluni,  and also tempted by the very promising opportunities in the east and north that the warming climate created.  Instead of defending the lands turning into desert they stated migrating in ever larger numbers north and east through the newly opened Thornward gap.

The Suel saw their arch enemy move in north of the Sulhauts, their plateau was fast turning into the desert it used to be and plans for a revenge started circulating, and the rest we know..

This is far from complete story, I have left out the humanoids and several other actors. It shows an interesting way you can use geography and climate to inspire, support and help out in creating a more interesting and deep fantasy world.

Let's take a closer look at the Flanaess and how we can use this.

Below is the Flanaess in cold times with good sports for settlements  in the cold and persistent times. 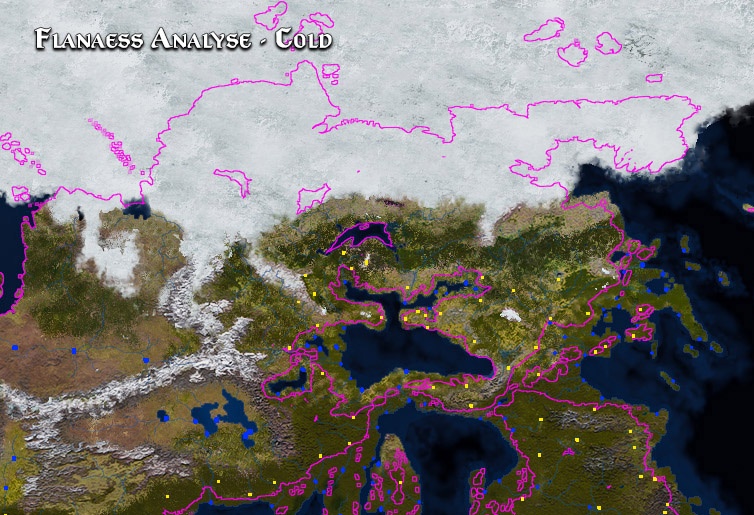 Then a look at hot Flanaess 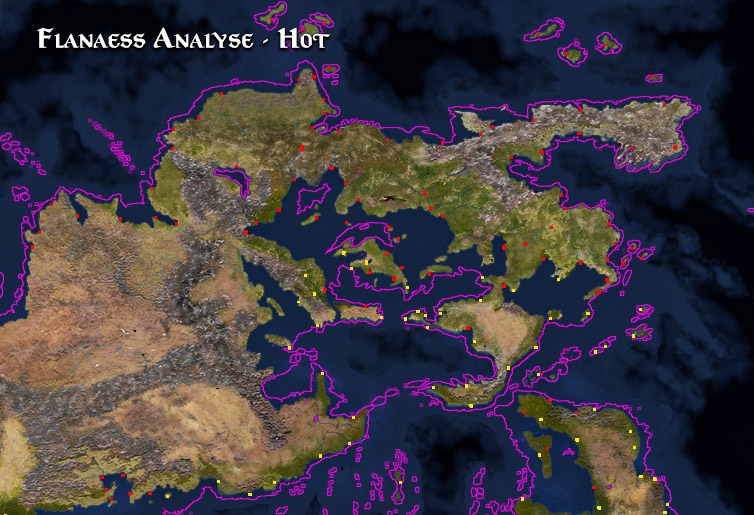 and then combine all of the info on the current map and we get some interesting results... 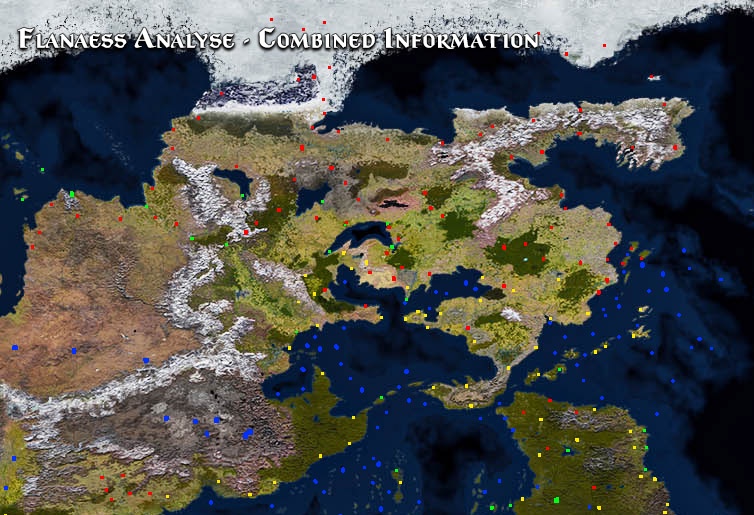 Now we can see likely ancients site and the period they hail from. I can see interesting backstory possibilities  for the lair of Dramidj, the Egg of Coot, ruins in the Barrens, the Land of Black ice and the coast of the Tiger Barbarians where Myrlund resides. I'm sure there are more interesting connections to get from this, time to get creative!

This is going to be one of the topics for my seminar on Virtual Greyhawk Con on Friday.

Thank you again for making this possible!! 🙂