Hepmonaland is coming and here is a first look at my version of it, focusing on the lakes and rivers. The best published map of the continent we have are from TSR11374 - The Scarlet Brotherhood, a sourcebook I really appreciate but the map leaves a lot to be desired. Remember that this is a work in progress and my map is not finished yet! 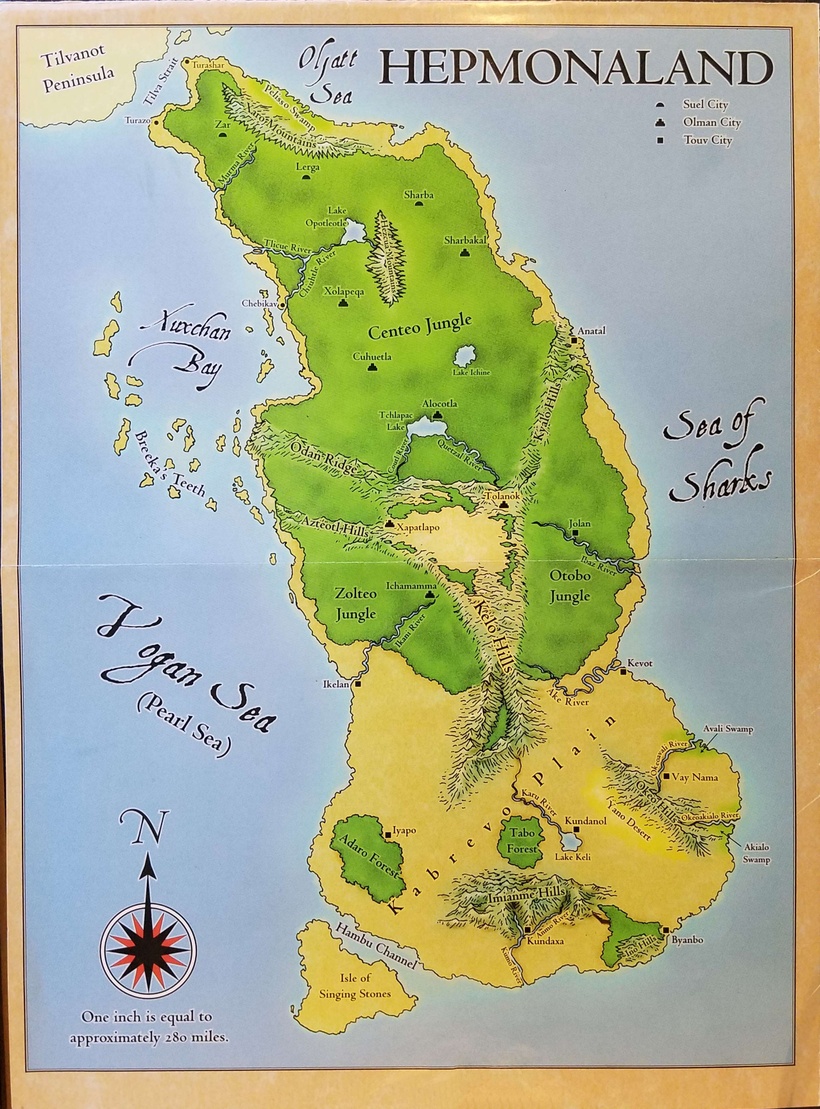 My main problems with this map are not the styling, it is a good looking map, it is the geography that puzzles me. The rivers are sometimes missing and at other times they slip into two on their way to the ocean.  Lets start when the Flanaess map ends at Tchlapac Lake. It has two rivers flowing into it but no run-off which is unusual in most places, but highly unlikely in a tropical rainforest climate. If the lake had been closer to the ocean I would have assumed that it was connected to it through tunnels, in this case I  added a river flowing north west into the Pear Sea. This decision I made when mapping the northern Hepmonaland around 15 years ago, just filling in the rest and realized that it needs a bit of widening. 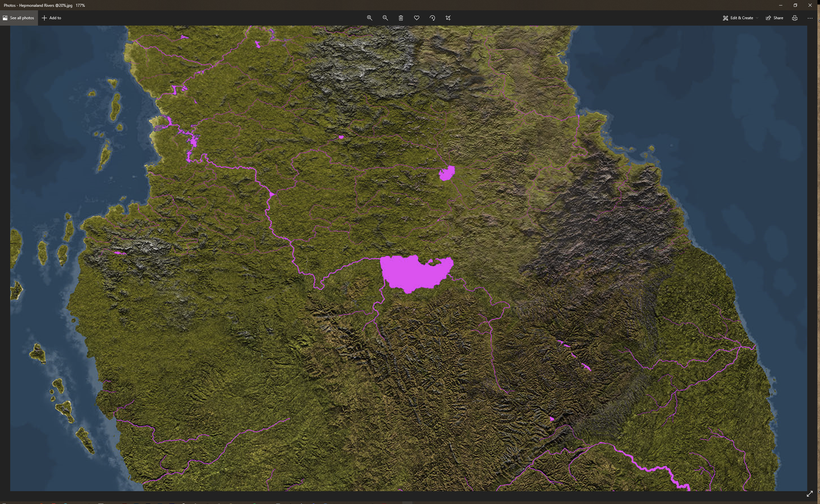 I've made highlands "blend in" with the surrounding lands much more using foothills and gradual tapering of the landscape and also working with different general elevation differences in the landscape. The TSR map lacks the dimension and depicts a flat looking landscape with some hills and mountains protruding here and there. In reality landscapes are much more undulating and gradually shifting with high plateaus, mesas and plains that are sloped in various direction. All of this without really qualify as hills or mountains. 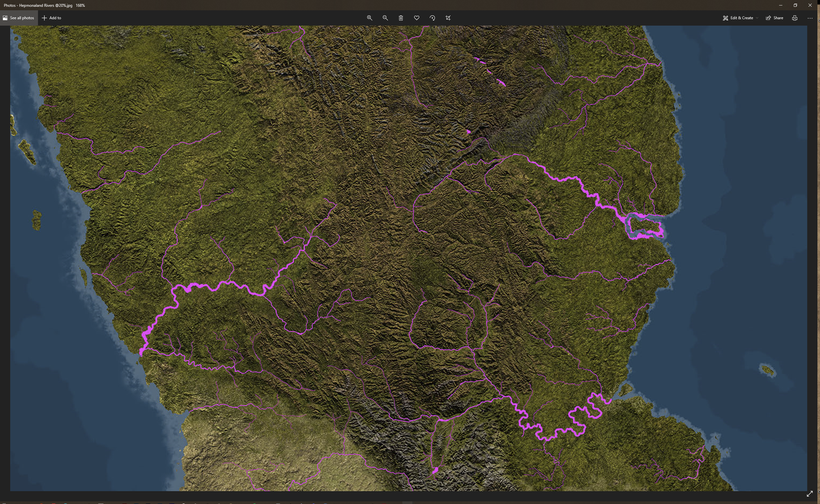 The Ikani and Ibaz rivers have been given lots of tributaries and neighbouring smaller river systems. Jungles also don't stop growing 76 miles from the coast. I know it must be tempting for a traditional illustrator or artist to accentuate the coast like this to make them look pretty, but in my project we are out for a bit more accuracy, so the equator jungles extend to the coast for the most part. Especially on the eastern coast of Hepmonaland due to the more humid climate further south. 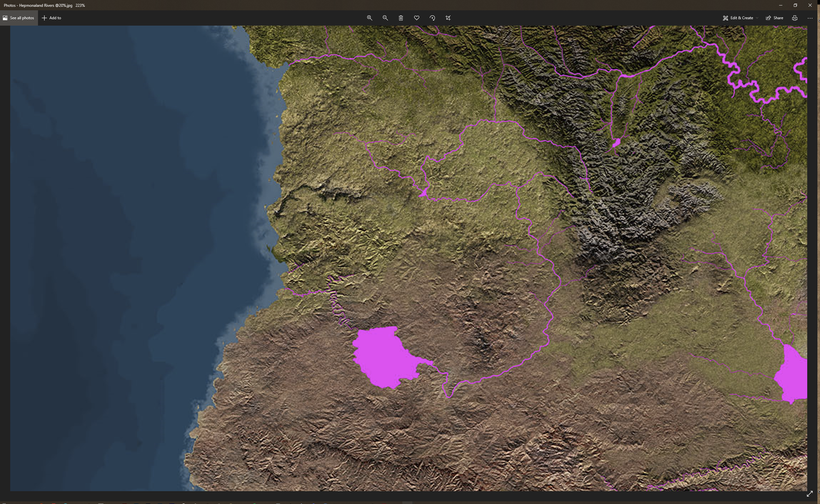 The Iyapo area wit its Adaro forest presented a challange. I see the southern, and especially the south western Hepmonaland as dry and hot desert with  band of savannah south of the jungles near the equator. To try and fit a huge forest in the desert presented me with an interesting challenge to try and bring  water to sustain a forest to this dry land. Thankfully the TSR map has no rivers at all in the SW Hepmonaland, so lets assume the western coast is of the more high and cliffy kind redirecting the flow from the western Kelo Hills mainly south. The rivers drain into a large shallow depression on a plateau creating a huge wetland that will be mainly overgrown with forest. Due to the tropical and humid climate in the region where  some of the rivers feeding the Adaro it will receive at least some water all year round. A small runoff meanders down the mesa to the north west, filling up only only occasionally when the rains are extra abundant in the Kelo Hills. 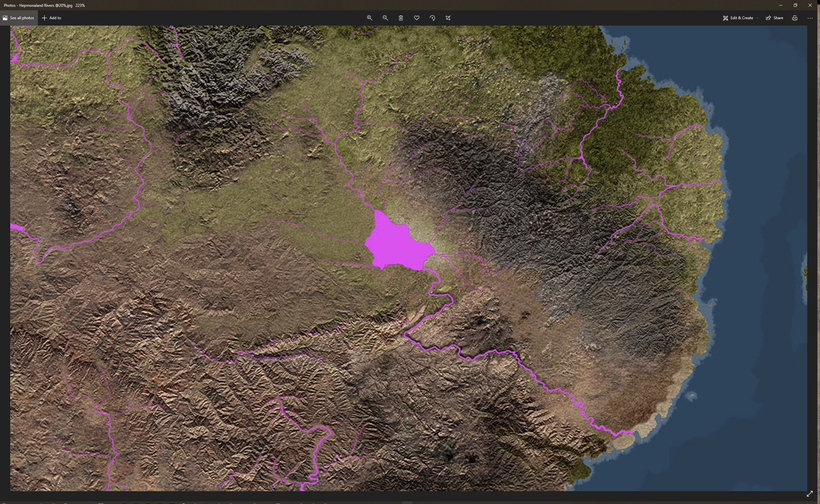 The TSR map has another conundrum,  Lake Keli. The Keli lacks a runoff, which I added  flowing to the SW into the ocean near Byanbo. Just like the Adaro, Lake Keli in the hot climate probably evaporates way more than it dilutes into the ocean. So the river valley I have added will mainly be dry. Water evaporation creates a regional climate wet enough to enable the Tabo forest to grow and create very favorable conditions for agriculture around the lake. 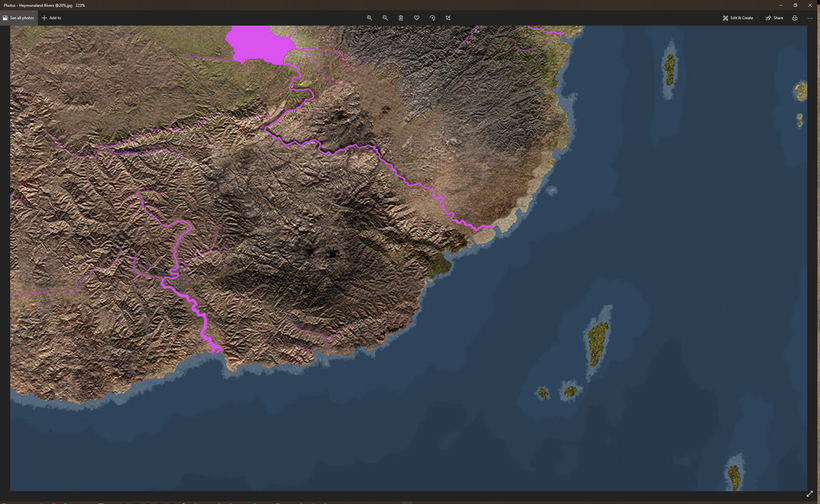 Byanbo and the Ino Hills are said to have volcanoes in them so I made them a bit more impressive since Hepmonaland highlands are not described as either tall, great or in any other way significant. I'm taking this as a sign of interest on the writers and not a lack of geographical significance. 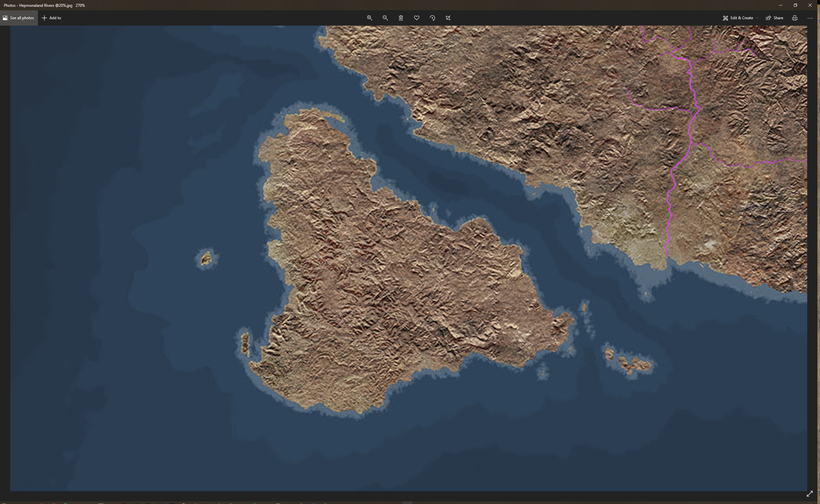 Here is a typical example that from a geographical view, the name being the most interesting bit of information. The TSR map is just a blank and what I've done so far is only the start, this island requires some more work to try and create a landscape with black rock pillars that can sing!