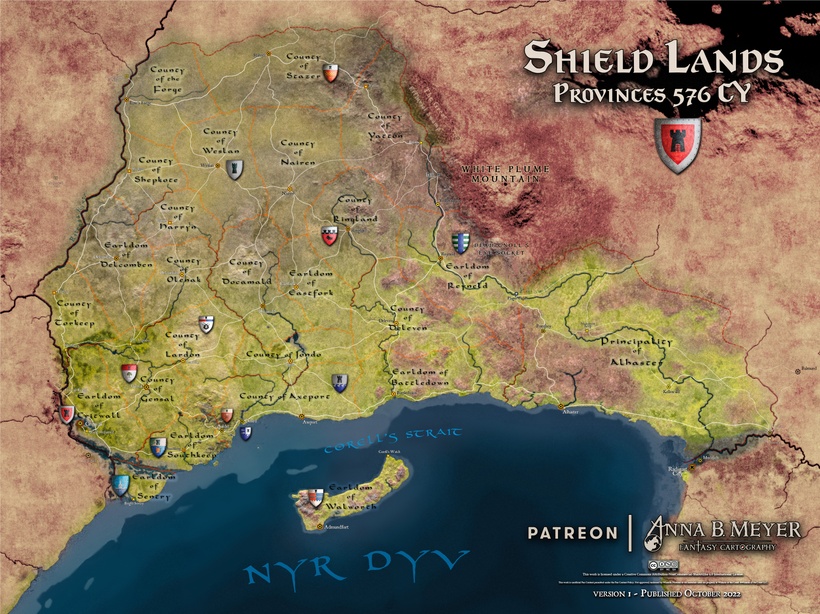 Her comes a look at the provinces of the Shield Lands before the Horned Society and later Iuzian invasion and the Greyhawk Wars.

There have been serval takes on how many provinces Shield Lands used to have, 21 or 23. Now in hindsight of both Living Greyhawk and the PaizoHawk development of Alhaster I have come down on 25, including the Principality of Alhaster.

Lets first look at the titles used and what that can tell us, they are with one exception Counties or Earldoms whish are for I take it seen as equal, but one step lower that a Principality in status. I can see that most of the Shield Lands was settled by adventurous people and nobles of lesser rank from the Great Kingdom in its early days and even a bit before. The Walworth's settled the strategic island in the Nyr Dyv and therefore laid the foundation for the future nation and a strong claim to its leadership held to this day.

Alhaster I imagine being settled by a Aerdian princeling looking for opportunity and better prospects away from the rigors and stale power structures back east. He, because I assume it was a male ancestor to the current Prince Zeech, settled the strategic coastline connecting the old lands of Urnst with the new lands of Ferrond in the west.

I' don't know if the early details are available, I might have missed something in my theories here. I marked this as version one so I can go back and update it as it gets scrutinized by all you knowledgeable Greyhawk nerds! 🙂

I've added the heraldry I've done so far to the map as well. I will try and fill in more and more of it as my campaign goes on and we get deeper into the Shields Lands.

Thank you again for all the support!!