I'm prepping hard for VGHC 2022, its only a few days away, and my agenda is jam packed with stuff all week!

Tonight we have a Legends & Lore Show - Politics. 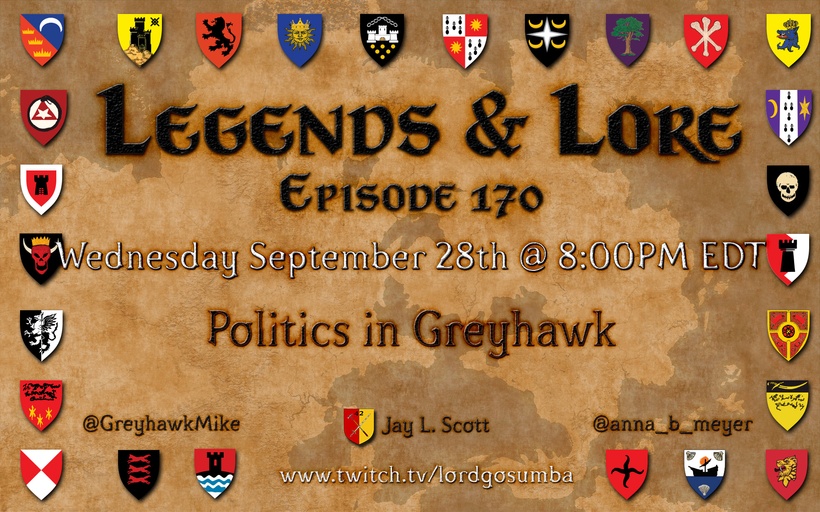 Friday the 30th is my Mapping and Campaign seminar: https://tabletop.events/conventions/virtual-greyhawk-con-2022/schedule/3

Right after that on Saturday I'm on the panel in Troll Lord Games seminar: https://tabletop.events/conventions/virtual-greyhawk-con-2022/schedule/21

And then I'm on the "Ask the Experts" stream at the end of the convention: https://tabletop.events/conventions/virtual-greyhawk-con-2022/schedule/2

I hope to see many of you there, and please take a look at the games, there are still seats open in some of the games!

Only a few days left until Virtual Greyhawk Con 2022 starts, and I'm working hard to get everything ready for my little part in this years convention.

I will have a seminar https://tabletop.events/conventions/virtual-greyhawk-con-2022/schedule/3 on Friday presenting what I'm up to in my Greyhawk related projects. This year there will be a bit less new maps but more other cool related stuff coming that I think you will be interested in. 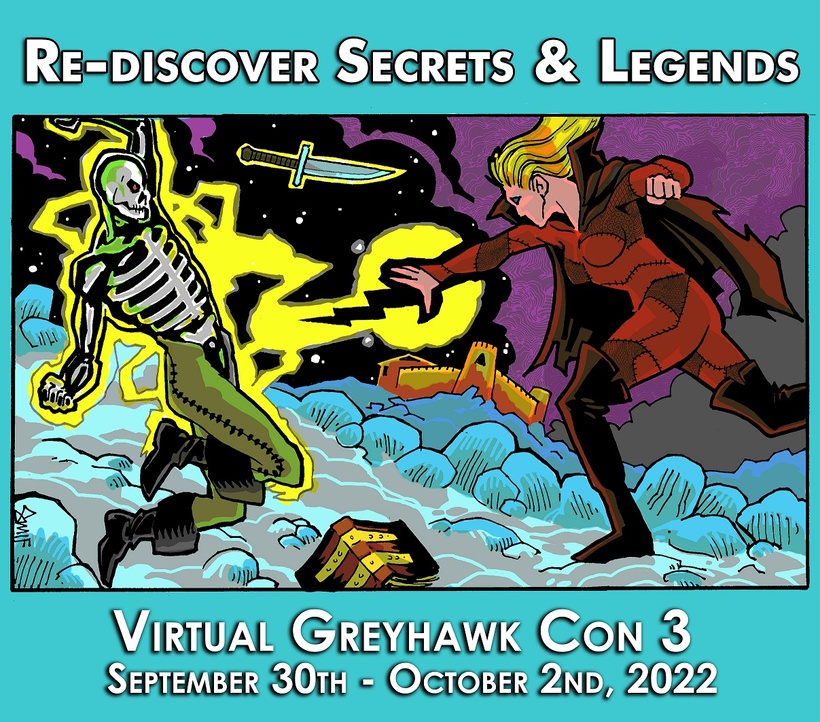 On Sunday I will be debuting as DM streaming a game session in my ongoing Shield Lands Campaign https://tabletop.events/conventions/virtual-greyhawk-con-2022/schedule/57

There will be three invited guest playing pre-gen characters, and the first one is being presented in this post. The rule system I'm using are "Advanced 5E" (A5E) AKA "Level Up" from EN Publishing https://www.levelup5e.com

I'm in the middle of house ruling it, which I will go into detail about later. The main thing I've changed is to try and make it classless.

On to the first pre-gen character, meet Bruenor... 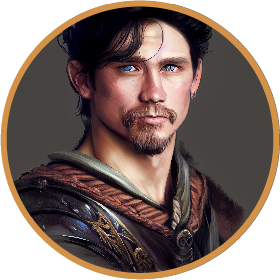 Turn Undead: As an action you present the holy symbol of your deity and speak a divine word rebuking the undead. Each undead creature within 30 feet that can see  or hear you must make a Wisdom saving throw. If the creature fails it is  turned for 1 minute or until it takes damage from any source.

Faith Within (reaction, 1 point) When you fail a saving throw against a spell or other magical effect that makes you charmed frightened poisoned or stunned at the start  of your turn you can use your reaction to repeat the saving throw.

Divine Spellcasting granted by Heironeous, Bruenor’s spellcasting ability is Wisdom (save DC 15, +6 to hit with Spell  Attacks). He can cast the following spells:

Bruenor was born in Delard in County of Axeport as it was known back then as the only son to a couple who maintained and repaired small boats. Young Bruenor was only 4 years old when the forces of the Horned Society closed in on the town and the family decided to flee. They ended up in Herechel, a large town on the Furyondian side of the Veng estuary.

Life in Herechel was comparatively good and his parents could continue their work. Herechel have a small port suitable for the kind of small vessels they had worked on in Delard. War was continually close by during Bruenor's whole upbringing, first the Horned Society conquest of the Shield Lands and the escalation into major conflict in 585 CY when Iuz forces took over the occupation of the Shield Lands and attacked Furyondy.

Very eager to join the fight, as a 10 year old Bruenor was too young to join any military unit. When he was 15 he and a group of young Shield Landers in exile took the ferry from Veng Keep to Southroad and told the first official they encountered that that wanted to join the order and fight for their homeland. That very night the youngsters witnessed first hand how a large force of hobgoblins lead by a Iuzian cleric stormed the towns defenses that was only partially built at the time. Bruenor was tasked with assisting those wo where bringing the wounded and the dead to safety.

That brutal baptism of fire made him see war clearly, both the brutality and grief but also the determination and courage of the Shield Landers who defended the town. Young Bruenor decided then and their to be as tough as they where. He was sent to Onea on Scragholme Island for basic training and early on he got recognized for being levelheaded and keeping his cool.

After two years in training, in the summer of 595 CY he was sent to Southbridge for his first front line assignment. He was part of a new generation of warriors trained by hardened veterans and well equipped who got a chance to show the enemy what they where made of. He served well and gained a reputation for being both brave and patient. He swore and oath to the order and was now on his way to become a knight.

Slowly Heironeous call became stronger and stronger and Bruenor decided to concentrate on serving the arch paladin in the role of protector of the faithful instead of becoming a knight. The blessings from his new master grew stronger over the next few years as Bruenor participated in the defense of the area around Critwall and the daring raid to retake Southbridge keep in 597 CY. He was part of the reconnaissance force and made quite impression during the clandestine river crossing and further action behind enemy lines. This led to Bruenor being asked to join the Shield Patrol by Ottumin one of the unit's commanders.

The last year Bruenor have spent a large chunk of time on patrol deep into occupied territory hiding from the enemy more than actually fighting him, but from time to time the action have ben brutal. After a daring recon mission along the Sente river he was given his most cherished possession, a longsword blessed by Heironeous, which have proved very useful in later missions.

After a few weeks of light duty and rest in Critwall Bruenor was selected to recon for the large force that was going to set out to retake Southkeep under the leadership of Katarina Walworth herself. This was the first time he saw the now legendary commander in person. He arrived with his ragtag looking band of fellow warriors. Bruenor had in youth imagined himself in shining armor, which he had worn a few times as an honor guard in Critwall, most of his service had been dressed to blend in among the ragtag souls still present in the occupied southern Shield Lands.

On Sunsebb the 12th 598 CY they attacked Southkeep with full force, the sheer intensity, brutality and suddenness stunned even him. It was the first time he witnessed what a force several thousand strong could could bring to bare. Only five of the enemy managed, or was let to escape, the rest was given no pity and those who had any signs of the Old One was put to the sword. A handful of civilians was found in a slave pen half frozen to death in the winter chill. They was helped back to recovery and sent back west for interrogation and assistance.

A large part of the force continued to press on and the next day Katarina told them that the next stop was Auldet a small town that had been occupied since the start of the war. It was going to be used as a base for further venturing into the Serion Hills. Katarina laid out a plan to check in on a an old mountain stronghold in the hands of a band of freedom fighters led by a servant of the Old Faith Maidjan, and then retake the Serion Keep next door. Bruenor herd some people laughing or muttering something about Vayne's hunting lodge.

Implemented all the relevant changes from the 576CY 2022 map update:

Changed the internal borders of the Duchy of Urnst to provincial.

Shield Reclaimed - From Bastion of Faith

Tweaked the roads of Freehold

Named the road from Harrowkeep to Spinecastle, The Harrowing Road

Mansbridge, moved east and changed to a small valled town

The Docks added next to Stoink

Goldchasm moved further into the Adri

The Eddri Line of keeps in Idee are now labeled

The Black Obeslisk site added in the Rushmoors

Split Rock added in the Rovers

Asmogorgon upgraded to a town

Removed a few roads and sea lanes in the SW

Shanscross added in Veluna, from Saga of Old city

Stump in Furyondy moved north to the road to Laurelinn, from artifact of Evil

Pen-Wilds area added in the northern Barrier Peaks, from Sea of Death

Bardillingham added in the Vale of the Mage, from Sea of Death Gord book

Ruined city of Zinbyle in the Sea of Dust is named

River changes on the terrain map

Franz river and its tributaries

Added rivers along the cost of the Gulf of Ghayar

Added the Mines of Father Eye in the Bright Desert

Adjusted border of the Free Reaver's

Adjusted and reclassified borders in empire of Iuz.

Added mile markers to all roads