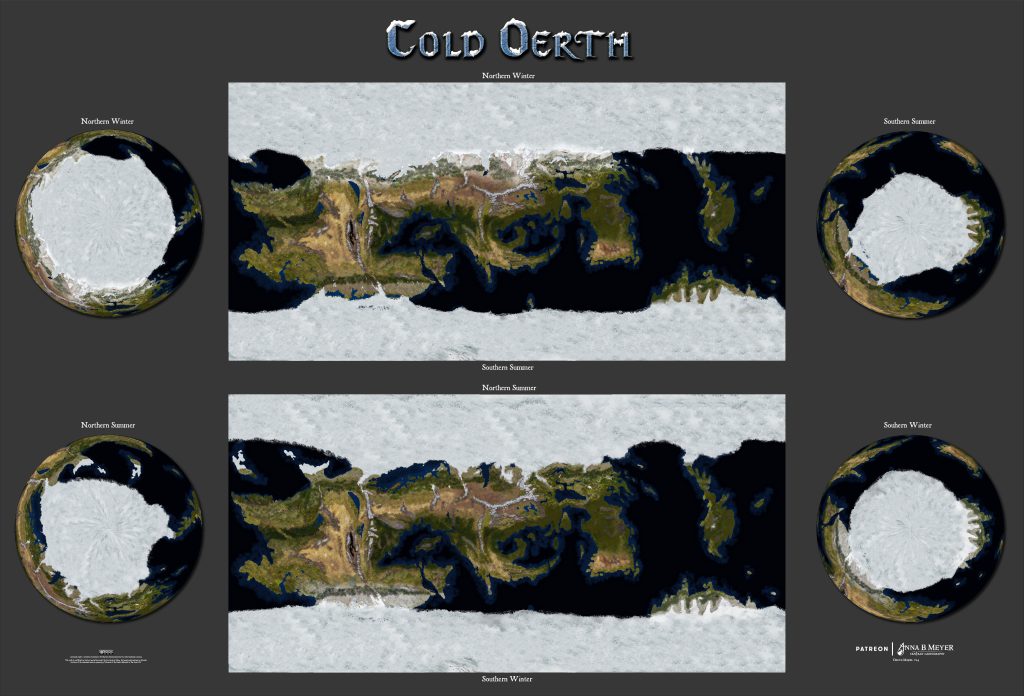 My premise for this version of Oerth is a version of Oerth not too long ago, geologically that is. How long ago is up to you in your campaign, but recent enough for the continents are still in the same place, so thousands rather than millions of years. The assumption is that the climate is around ten degrees Fahrenheit colder than what we are used to, similar the conditions on Earth at the Last Glacial Maximum circa 20,000 years ago. Add Oerths axial tilt, larger landmass and it gives some very interesting results. Been helped by friends who are experts at this in the real world and they gave me some great inputs that I let guide me on the journey to see what a cold Oerth might look like. 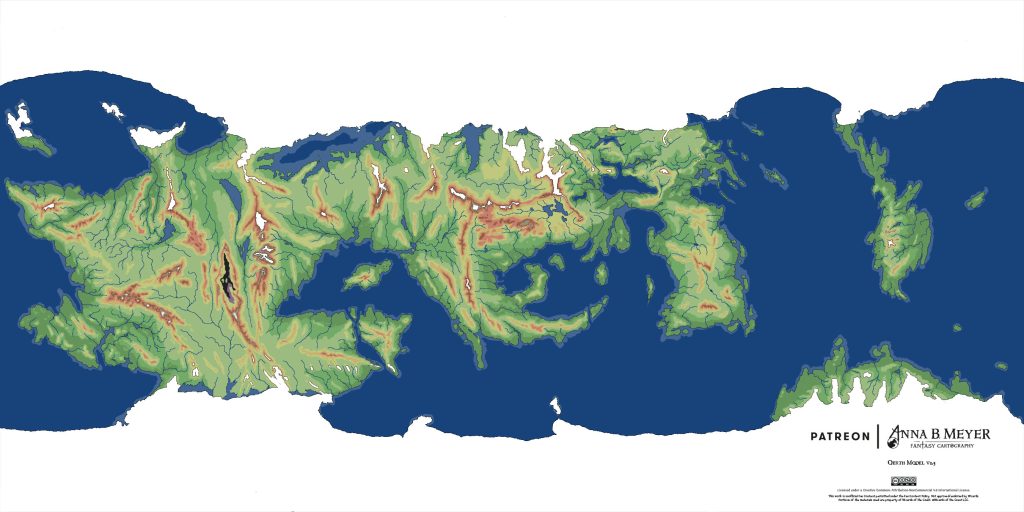 Northern Flanaess are covered in a thick ice sheet, often a mile thick, along its entirety. Only the many mountains of the northern Flanaess, from the Ytails in the west to the Griff and Corusks in the north east towers over the ice. Central Flanaess are now a artic frontier with a band of tundra before the thick ice cover towers just north of the Rift Canyon. Whyestil Lake is permanently frozen over and the peaks of the Howling Hills are barely visible through the ice. A band of Boreal forest stretch from Bissel to what will become the northern Great Kingdom, with an arm following the Lortmils all they way to the Pomarj. Nyr Dyv is larger due to an influx of meltwater, turning large parts of surrounding lands into wetlands in the warmer months. 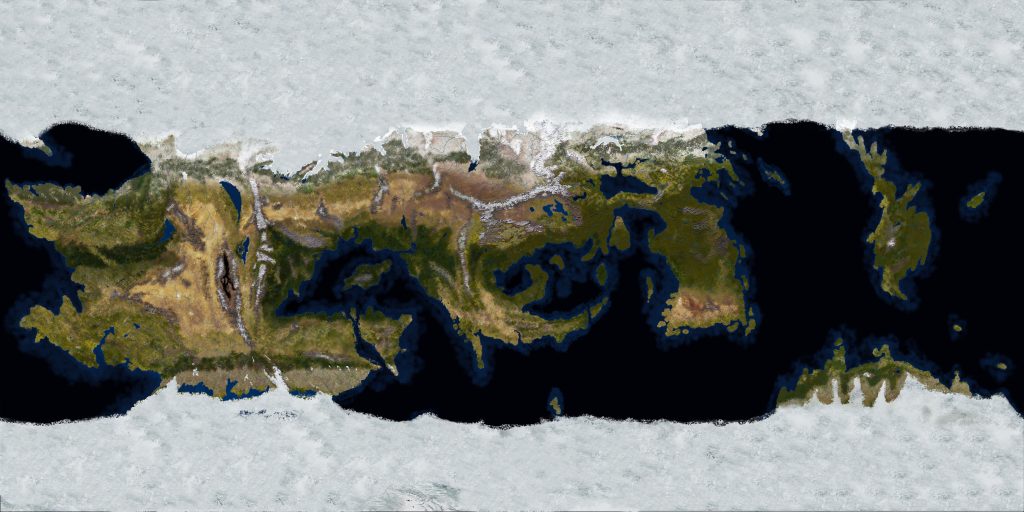 Western Flanaess are even colder, the smaller Dramidj Ocean suffered from not having an influx of warmer waters from the tropics and mountains in the south kept out what little wamer air was still around in those cold times. This have turned the Baklunish lands into an arctic borderland. The Bramblewood gap are now frozen over all year around along with most of Ket, isolating the Baklunish lands from the Flanaess. Most of the The gulf of Ghayar freez in winter and the Dramidj are frozen all summer making the sea inaccessible, but its waters are high in spring and summer due to ice melting flooding large areas seasonally.

Eastern Flanaess fairs much better thanks to the large Solnor and the warm currents from the south. It is also much larger due to the fall of ocean levels, large parts of the shallow waters are now some of the best real estate on the planet with an temperate oceanic climate and covered in deep forests. I can see this as perfect hunting grounds for the early Flan, roaming across what would become the Aerdy lands to Lendore Isles, now a range of hills part of the mainland Flanaess.

Sothern Flanaess have experiencing some of the largest changes with lots of additional lands. Olman lands are now much more of a coherent realm stretching from Hepmonaland in the east across a land bridge connecting Tilvanot with the Amedio making the Azure into an inland sea. The Amedio is much larger with savannah and jungles across what used to be shallow waters. The former wester Azure are now very habitable lands with oceanic and Mediterranean climates, with to small inland seas with brackish waters that used to be the Jeklea Bay and the deep waters south of Gradsul.

It is now a part of Oerik with a land bridge across what used to be the Tilva Straight. It has expanded a bit covering the once shallow costal waters and a new set of islands further out have risen out of the submerged ocean. The hot and dry south are still home to hot steppes and a small hot desert but the southern coast are now sports a cozy med climate, perfect for characters who need a nice warm place to retire. 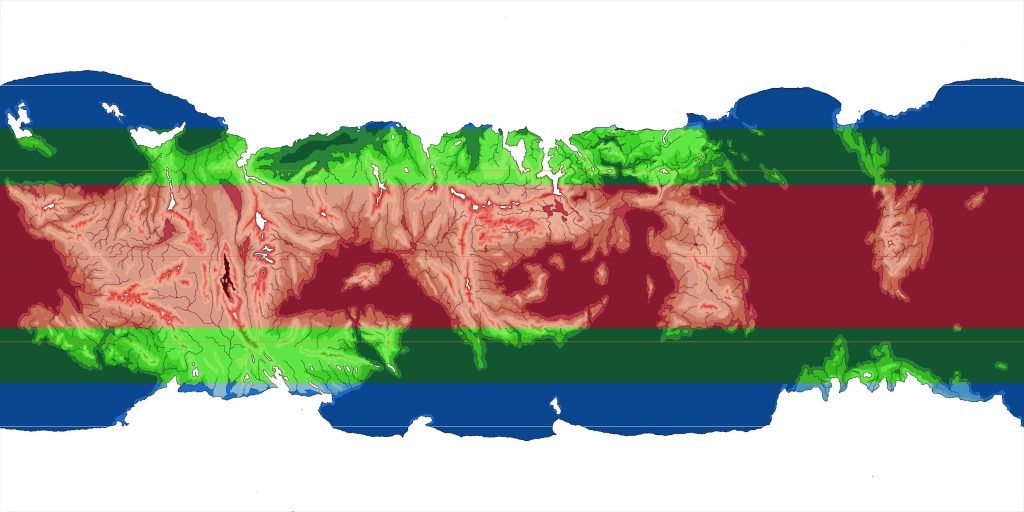 The western Dramidj are now an inlands sea with a northern icy coast and the biggest stretch of boreal forest on Oerth. The interior is is till dry but much colder, turning the hot desert into cold dry steppes and deserts with band of hot ones in nearer the tropical south. South Central Oerik is the least affected by the cold climate, still wet and warm full of forests and savannah.