We are 195 Patreon members as I write this, thank you all for supporting me, it means more than you can image to gain such a trust!

My posts have been scarce lately, for which I apologize. It is due to two reasons, a Kobold Press Project that takes up the majority of my time at the moment and will so for another month or so. Then Greyhawk mapping is back into the forefront again. The other reason is that a lot of groundwork is being done for things to come. Now that March is soon here and so is the start of Con Season, it is time to start to reveal what I have planned for this year. 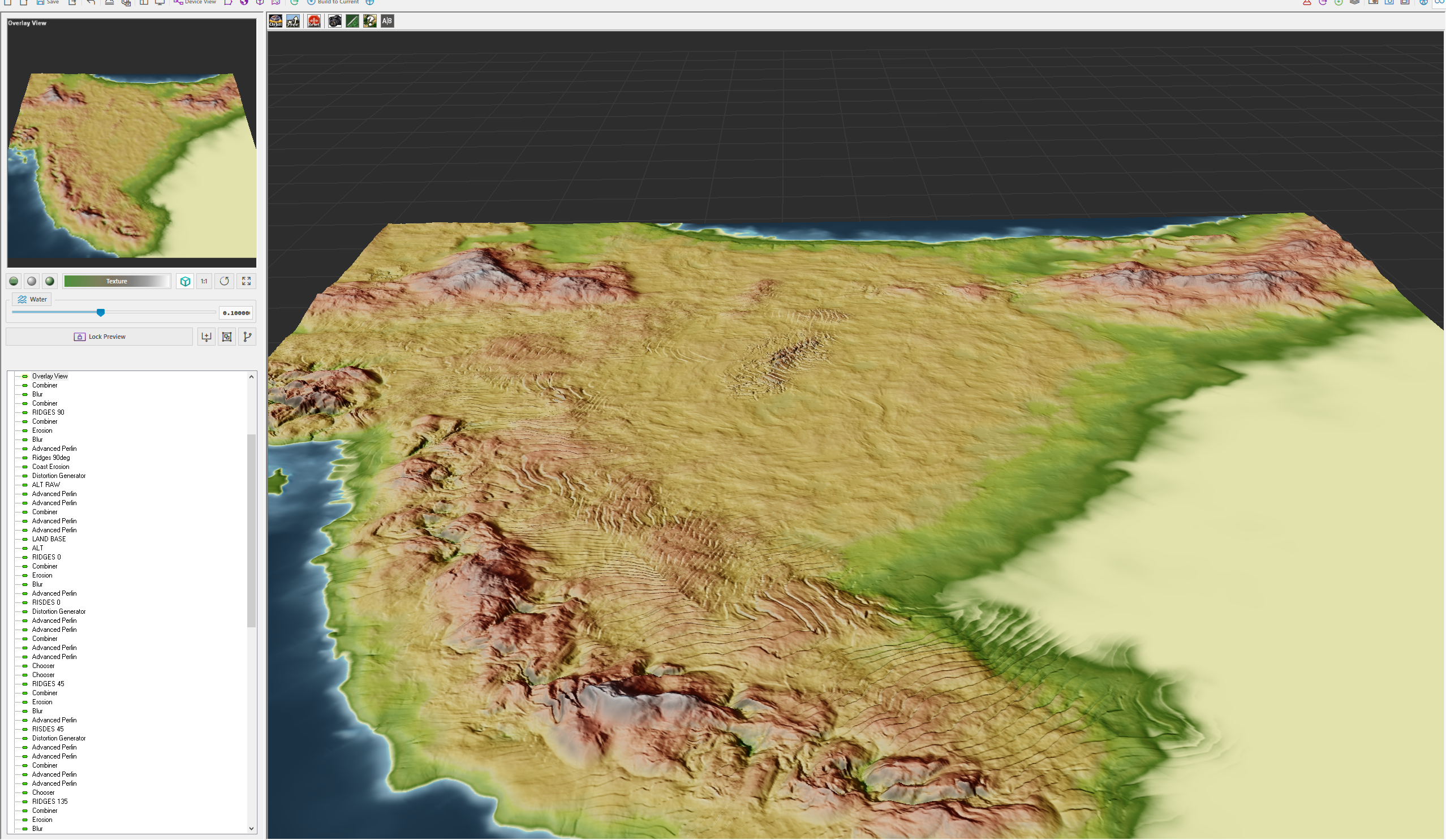 Lendore Isles and Hepmonaland are already under way, and significant progress are being made on the Lendore project. Hepmonaland is a different beast that share a lot of workflow and technique with what I'm doing for Kobold Press, so it will get a boost from what I'm doing there this summer. A major installment is scheduled for you guys in August. Exactly how much it will be depends a bit, but it will be a large part of the continent for sure. 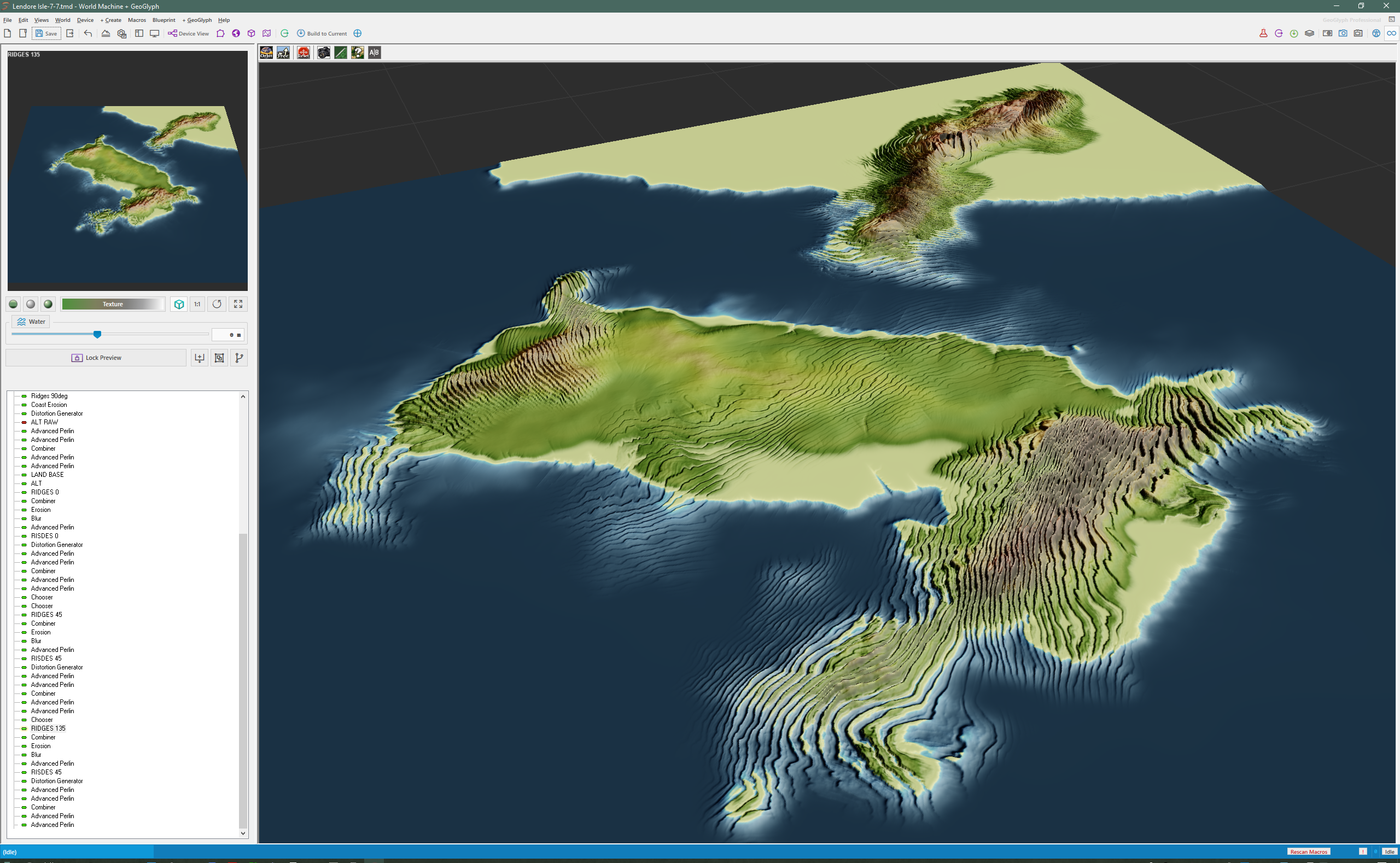 Lendore Isles is a project on the cutting edge of both my abilities and what current technology can provide, so it will take a bit longer to get fully polished. A first look at the terrain and how its made is planned for Cartography Patrons in June. These are contested islands with various versions presented in the past, so this project will have to honor that too with at least three different versions coming this fall. 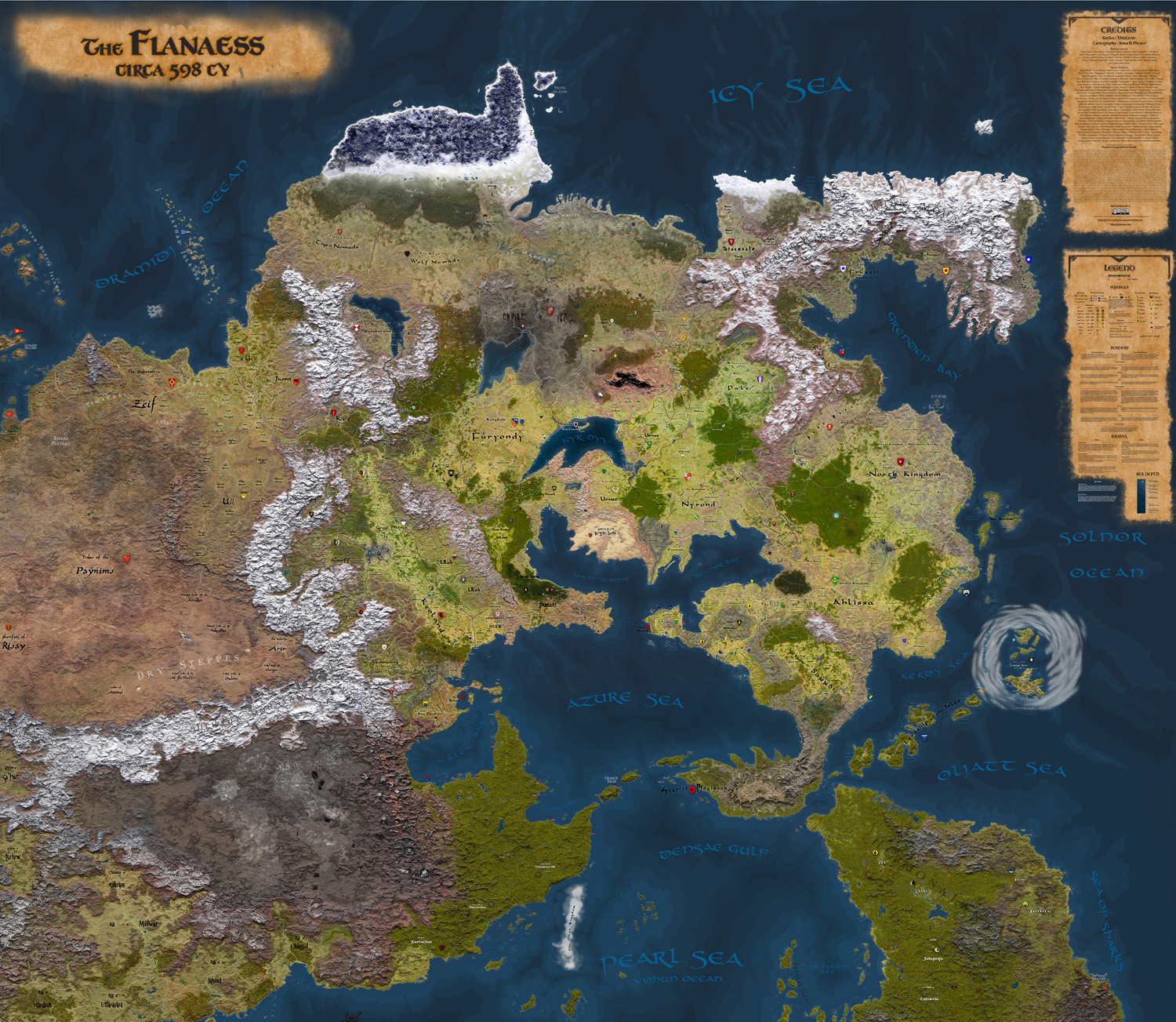 The 2019 Edition of my Flanaess map was just launched, and I'm very proud of how it turned out and I've received an unusually large amount of positive feedback. This doesn't mean that this year's Edition is done, there are a whole bunch of versions still to be made. I'm currently exporting it layer by layer in full resolution PNG's with transparency so I can make things like: Player - DM maps, area maps, and special versions for Realm Works among other things.

One of the benefits of this is I get a good chance to go back to a pet project again - handout maps. The first batch of handout maps got a lots of love, but also constructive criticism. This was good valid points (most of them), which I take to heart. It was also my first try at doing something similar and learned a lot from it. So the take away is - Do it again and Do it better this time - Flanaess Handout Maps Set 2 is coming! This time they will be full resolution, include layered versions, better labeling and a documentation on how you go about creating similar maps for all the Cartography Patrons.

As soon as something is done, my routine is to sit down and try and figure out what to do better next time, so work on 2020 Edition is already under way.  My Campaign version of the map has always been serving as the test bed for new features, which is a tradition I intend to keep, so this spring and summer an updated version is coming. Will update the borders to the new territorial control paradigm instead of the old claimed territory. 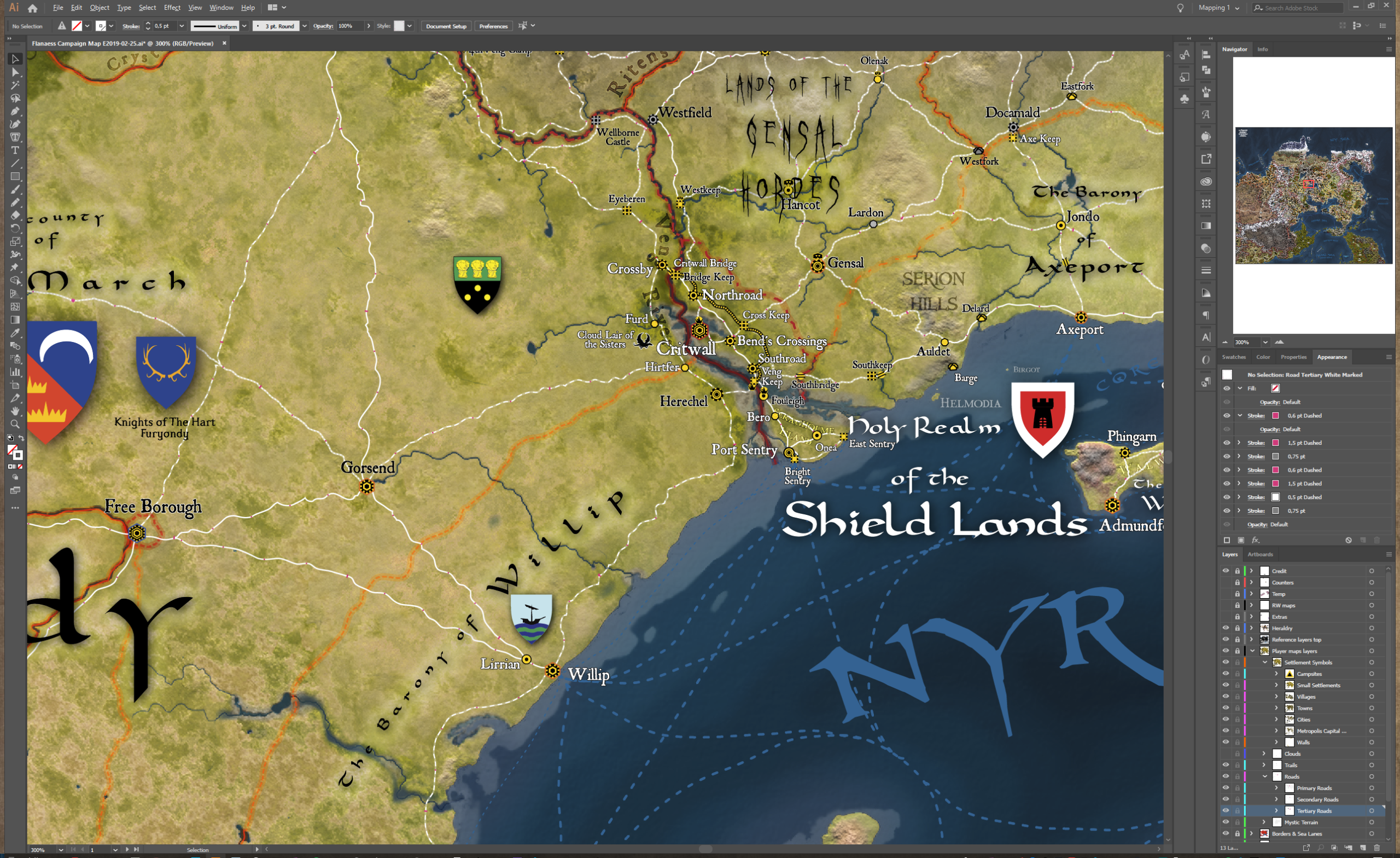 Thanks to some well worded questions and criticism I came up with the idea to test out if Adobe Illustrator CS could be used to add mile markers at certain intervals along roads and trails. Initial trails where very promising, and you can see the first results in the image above. So now I will add a small marker every 10 miles and a larger marker every 50 miles. Thought this was a feature that needed GIS tools, but it looks like old Illustrator still has some tricks up it sleeve.  An special post on how I did this, and styles for download, will come later for Cartography Patrons when I have the final settings done.

Preparering for my next campaign set in the former Shield Lands in the winter of 598-599 CY, and as you probably all guess maps are a big part of my campaign planning. So the Empire of Iuz and its surroundings will get a major work over for the new Campaign Map 2019 Edition, with a special add-on in the form of my take on Iuz Demiplane. It will be my first foray into planar mapping, so don't expect too much , but one has too start somewhere right!

So what can be left to talk about? 😉

Well, something that have been asked for since I posted my first map on the web, a "classic" map of the Flanaess. I'm hearing you, and now its the time to do a Flanaess 576 CY Map!

Struggled for a long time on how to approach this, and even did a smaller version a few years ago with just the same information that was on Darlene's original map. I have now decided to do it like the features that are on the 598 CY map existed back in 576 CY, and change borders, names and heraldry etc to match the situation of 572 CY. There will be exceptions of course, some places where not built until later, but they are the exception. And yes it will come with a 30 mile hex option, and no, my 30 mile hex layer will not match the one on Darlene's map. Despite this I think it is a map that many will find useful.

Gary Con preparations are under way and I just go back from the printer with a bunch of handouts presenting my Greyhawk mapping and my Patreon. You can download a PDF version here: https://www.dropbox.com/s/8nm9gyszyq7zmg3/Anna%20Meyer%2017.5x12%20inch%20Handout-preview.pdf?dl=0 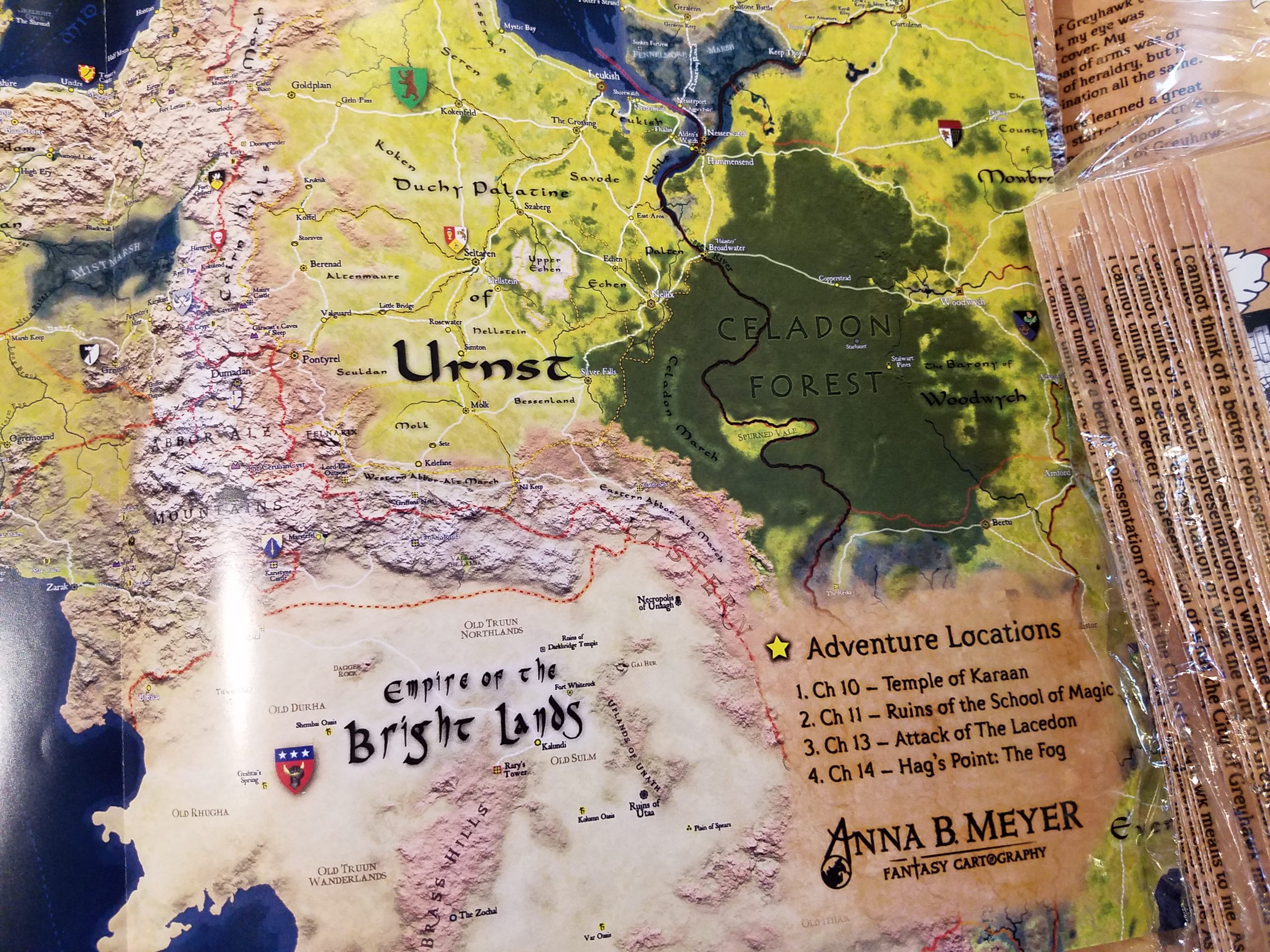 The back side, seen above, is a sample area around Greyhawk. The print turned out really well, much better than previous prints I've done at Staples and other print shops. This print is done at a printing company where I help out from time in their art departement, with Illustrator, Photoshop and InDesign work, and they have modern large capacity digital printing equipment. The equipment they have and the fact that I could oversee the whole process made me really pleased with the result.

The good results with the Gary Con handout made me think, what about printing the whole map in pieces.  They largest format they can print borderless without resorting to expensive inkjet, is effectively 12x18 inches so we are talking a number of pieces here. One of the benefits of digital printing is that it can be done in small numbers. It will be expensive but less than the of $500 - $1K that an inkjet print would be. It is also a lot of work managing the print and then packaging and sending out the prints, but my Patreon members who are interested could be a manageable number to do.

I've thought about doing this as a special offer when we reach 250 members, it will give me more steady funds so I can devote more time to do something like this. If it works out well it can be done as a yearly thing perhaps. If we reach 500 then the budget both in time and money increase and bigger print projects can be tackled.

There are a number of new cool tools to look at as well as maps to work on!

Thank you again for making this possible, together we can make more Greyhawk maps!