Another year is coming to an end and it is the usual time to reflect and try to look forward, and this year it feels way more significant that almost any other year. 2020 have been, despite all the bad things that have affected the world, a year with lots of new possibilities. When your work is visualizing fantasy worlds, living in a world where almost all of us have been forced to stay home is not the worst that can happen.

This have been my most productive year with many small projects and three big ones that have taken shape at my desk this year, two for Kobold press. Southlands redo for 5E and a not yet announced project, both of them very large that I started on back in 2019.  Going back to the Soutlands that I worked on 6 years ago was good kind of nostalgia, and I'm pleased how well the map has held up and now it is a bit better. The third big project was the Flanaess 576 CY map and its Atlas version. Originally planned to be a two or so month project, but it took over 6 months of hard work that turned out really well in the end.  This project is also a bit nostalgic, it is the last major version of the map that got me into fantasy cartography. For over twenty years I've worked on the same map using almost the same tools either creating it or updating it. That era is now coming to a close, future Greyhawk mapping will be using a new set of tools and techniques.

When it comes to tools this have been a year of ambivalence, great promise but few actually useful progress. Gaea was a tool that looked very promising this spring, but development have fallen behind and the features I need for my work has yet to materialize. Thankfully World Machine has made a comeback and is now ready to be my go to tool for the new generation of Greyhawk maps. I just now on New Years Eve downloaded the final build of WM 4 and it has all the features I need. Using tiled builds we can cover up to half a million square miles at a times at 5 ft resolution. That is a bit too much in one go and make sure you can terrain that is varied enough, so I will do it in part not that big but still many tens of thousands of square miles.

My idea is the work on each drainage basin at a time to assure that rivers, lakes and its shore lines are matching properly. Splitting it up along the major rivers and mountain ranges where possible and try and patch over the errors using GIS mending tools as well as import the broken areas into World Machine and adjust the ugly bits. Trying to keep the problematic areas to lake and river bottoms and remote mountain peaks will hopefully make them less prominent. Real world cartographers phase the same challenges, so there are good tools for this and mapping a fantasy word gives us two advantages, it is possible to go back into and tweak the output and no one can say its not matching the real world.

The biggest hurdle in the "Next Gen Greyhawk Mapping" is water. Having lakes and rivers draining the landscape in a natural and believable way procedurally, instead of having to do all that manually. It is now possible to place major lakes and rivers, and having World Machine filling in all the fine details. This will save almost half the time it takes me to map an area, getting a faster computer will cut that time another half. This makes mapping the whole world become possible and the Flanaess going from a "over a decade project" to a more feasible five year project. Below is a bit of test terrain I made in a few minutes, combining all the watery elements with two types of terrain and proper erosion. 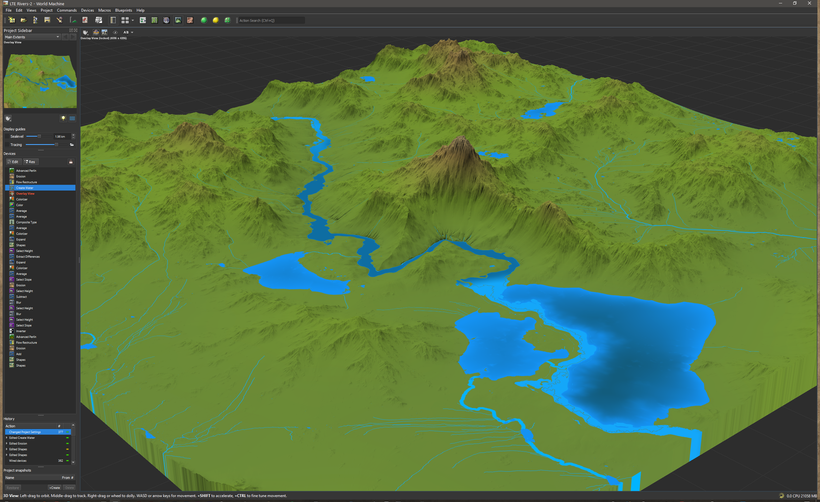 This test is only low resolution but it proves that all of the details needed can be both controlled and procedurally generated fast and reliable. I'm especially pleased of the water texture. This is just a quick sample using two colors, with an array of colors and textures it is going to look fantastic in high resolution. The Darlene map had a detail level of 30 miles, my current map has 1 mile, my goal with next will be 5 feet. The maps I have created for my Shield Lands Campaign have been a test run and proven it is possible and WM4 and a much more powerful computer will make it doable. 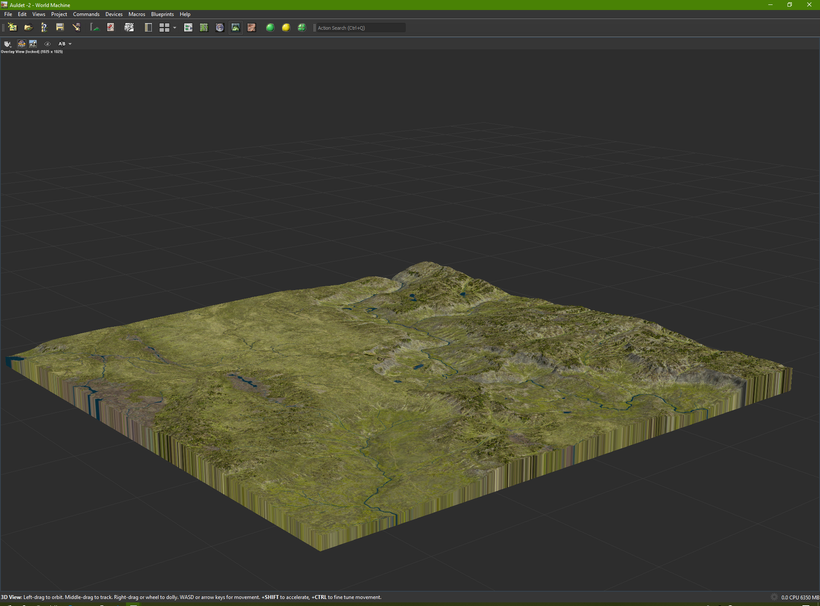 There are so many aspects to a project of this magnitude, and how you decide you will go about might be something you have to live with until you're finished. I've learned that the hard way, so this time I'm way more careful, maybe even too careful and trying to figuring out the best way to go about this. I've seen the Middle Earth project stumble and grind to half after several years of great and steady progress. I remembered Peter Jackson in an interview a year of so before the first LotR movies stating that "Now was the time to do it". That is how I feel about starting all over to try and visualize the World of Greyhawk in a way that I don't think any fantasy world has ever been so far. Now finally I have the tools, the experience and most importantly you guys to help me make this dream of mine come true. Thanks to your support I can now treat this as a part time job, pay for the tools and set aside time to work on this.

It will be a project with many phases and some of them need to be done in parallel, so many thing depend on each other. In order to create accurate terrain I need to know where the Flanaess is located on Oerth, so we need to have at least a rough working model of the planet. Terrain is directly linked to climate so we need to have a model for that as well with all its variety natural and fantastic. Data standards for all the information need to be established, keeping withing the laws of computer storage limits and in formats that can be used by most without expensive tools and a decade of computer graphics experience.

As aside quest I've been learning QGIS and just started with Unreal, both will play big part of this project. My goal is to use them both to produce and present, QGIS for traditional maps in print and digital. Unreal for a immersive 3D experience. There will be an overlap between the two and to make the raw data available for others to play with is key in this. I want to se many different version of WoG in the future using the data from this project as a base. I call it data since it will be a huge collection of images, heightmaps, masks, GIS shape files, various databases and more.

I want to create an immersive, inspiring and useful set of maps, data and even tools down the line to help DM's and players have more fun in Greyhawk. It might be technical and look boring and "computery" at times, but when you see a landscape you recognize as being somewhere in Greyhawk the feeling is magical. I hope you can share that feeling with me, it is a magical time we live in when you can use both words and fractals to bring fantasy to life, for me they are both very important for my gaming.

Together we can do it!