Its been quite a while since I did an update going over the various project and their status, which is extra important when there are little finished content delivered.

I'm working on several fronts at the same time which might not seem to be the smartest, but there are some good reasons. A major one is ergonomic, after a day or two of Photoshop editing my hands and arms can feel the train of using a Wacom pen for hours, so I need to switch focus to the muscles and tendons time to relax and recover. Working in World Machine, especially with development is a good antidote, its mainly brain work trying to figure out and test what works and gives the best results.  The other main reasons are that I need to keep both you guys and the publishers giving me commission work to do, and I need to alternate to stay creative and interested in what I do and avoid being burned out.

My biggest project at the moment are the map for Griffons Lore Games Trials of Arcadia, a detailed area map to be used for the hex crawl campaign. We are in the late intensive phase with about a month to go before deadline, and my goal is to have it done a bit earlier than that. It is an technically interesting project that uses the same setup and workflow as my current Shield Lands project, but at lower resolution to cover more area.  You can find out more about it here: https://www.kickstarter.com/projects/fireonclaymorewoods/trials-of-arcadia-for-5e-and-pathfinder-1e-a-miniature/

It is progressing well, with the first area almost all done. I plan to do a mapping live stream Friday this week to do the last bit, building heights and some touch up before the final renders. The results are masses of terrain to get lost in, and the vistas look as good as I had envisioned at the start. The final renders will hopefully be done next week so we can have look at things in detail. 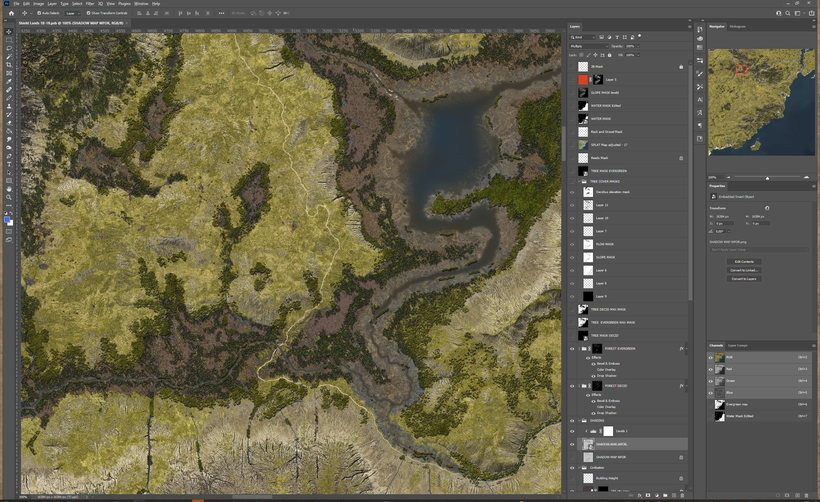 One little caveat is that the western edge will be changes when I merge it with the next area since I have tweaked the river and its valley eastern edge is on the area almost finished. This insight have made me realized that all areas of a project need to be developed in parallel as much as possible to avoid having to redo parts of an area. It is insights like this and how to either prevent  the problem, or how to best fix it afterwards, that I do test projects set in Greyhawk to work out the kinks. It is a lot of testing and some dead ends but in the end the goal is to figure out a better way of doing better maps. 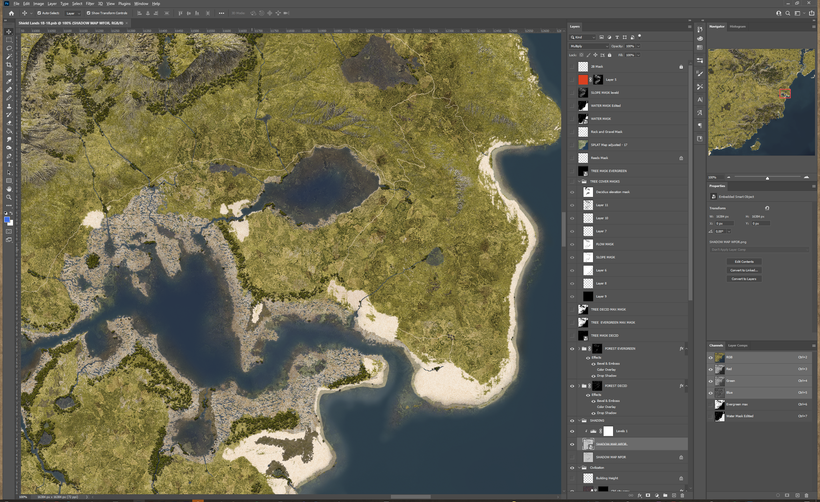 The major problem with the "bottom up" approach in this project is that the maximum resolution I can work with is 16K which means 15 miles at 5 ft/pixel. World Machine creates each render area essentially as a separate world which means that rivers and even elevation doesn't match perfectly when you merges the area tiles afterwards. This can be fixed for the most parts, but rivers are special problem since they need to flow downhill and over many areas which means I have to manually create them rather than using WM's built in river tools. WM's tool generated rivers also have a problem with lack of meander and other natural features, which means they have to be created artistically sung splat maps in in Photoshop. This gives excellent results but is very tedious. 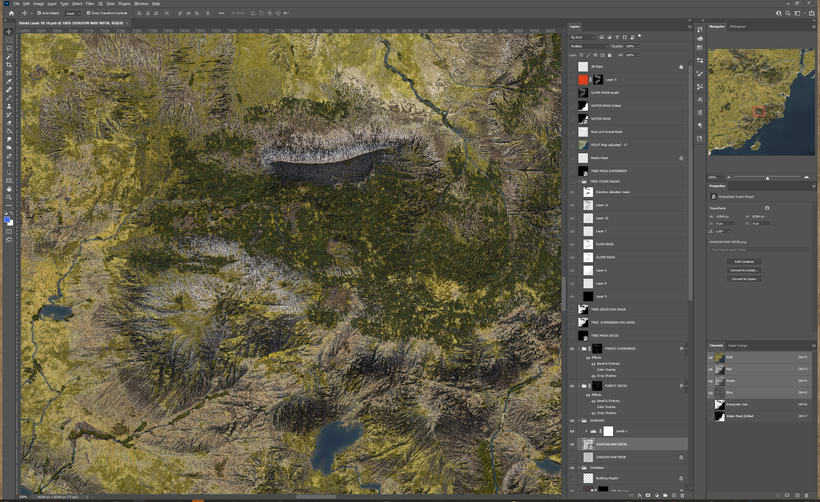 The way around the resolution limit is to render using tiles, which is not functioning properly in WM3. In the latest version of World Machine tiles works much better so hopefully this means it would be possible to render up to 64K covering a square 3,600 square miles instead of 225. Tests of this will begin in a couple of weeks, and I'm optimistic, it might be a breakthrough needed to get up to speed.

Thank you for all the encouraging feedback I've received for the Oerth model, next step is to look at cold and hot versions of the planet. I want to spend a bit of time doing this to get a better sens of historic possibilities and how that can have shaped history and evolution of things on Oerth. 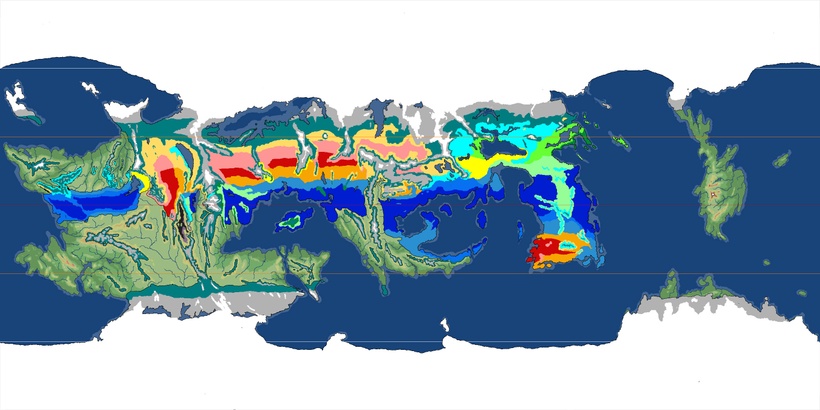 Cold Oerth with so much water bound in ice will have all the major oceans lowered, turning much of the continental shelves into land. Just like on ice age Earth this connects landmasses normally separated by oceans. On Oerth it is Hepmonaland that are joins up with an expanded Flanaess and an even greater Oerik. Ice and new land bridges connects all the major continents which opens up for interesting possibilities that cold living creatures (and their siblings) can be found on all the continents, depending on how you implement ice ages in your campaigns.   This is sill a work in progress so with some tweaks still needed, but the major features are there. It is a great learning opportunity for me , receiving help from friends wo are experts in climate and oceans trying to figure out how the fictional Oerth could experience Ice Ages and hot spells. 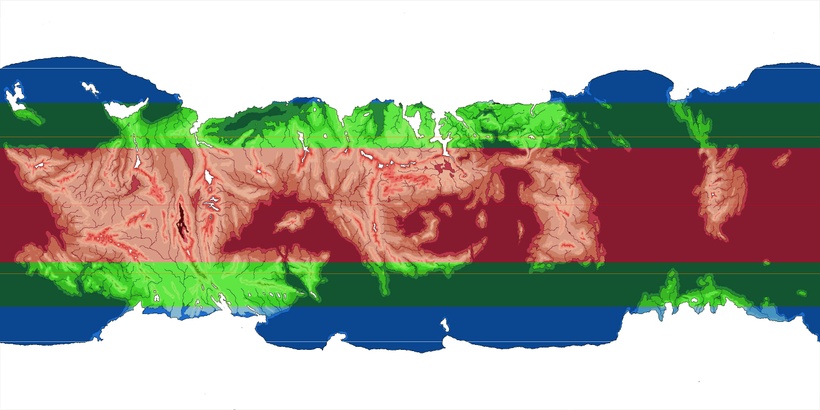 Hopefully you can find this interesting as well, as a way to spice up the ancient (or recent) history, or as a future seek or avoided.  Divine powers might screw with the climate as well as natural phenomena, there are lots of options!

My test using Notion to store and access my content turned out to work rather well. So I'm going to ramp up my effort and upload more of my stuff, index it and link it up with my website. 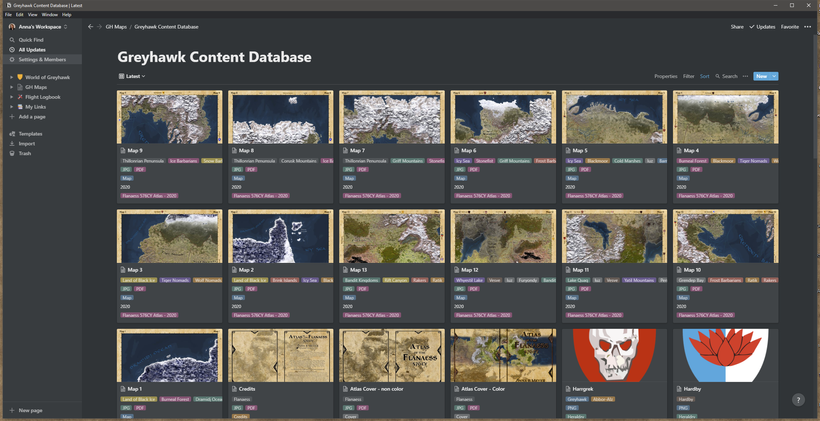 The big Greyhawk project of the year will be the 2021 Map and Atlas update, with the goal of bringing both the 576CY and the 598CY maps up to the same standard. The terrain will be edited to fit with the Oerth planetary model, which is mainly ice cover and islands in the icy sea and ocean depths. An expansion south covering the Isle of Dread and more is also planned for the 2021 Atlas.

The Atlases will be 11x17 single page maps, which will mean a larger number of maps but no overlapping fold to deal with. This means I can export each map in it its final version from Illustrator keeping its layers and vector format for the PDF versions which means better prints and  the ability to hide layers not needed. The overall number of pages should be roughly the same, around a 100 or so.

This is hopefully the last Illustrator based version of my old Flanaess map, it is my goal to start develop GIS versions next year. This will create the base for proper printed and online map version and more going forward. This is huge undertaking but worth it in the long run, opening up a world of new possibilities. 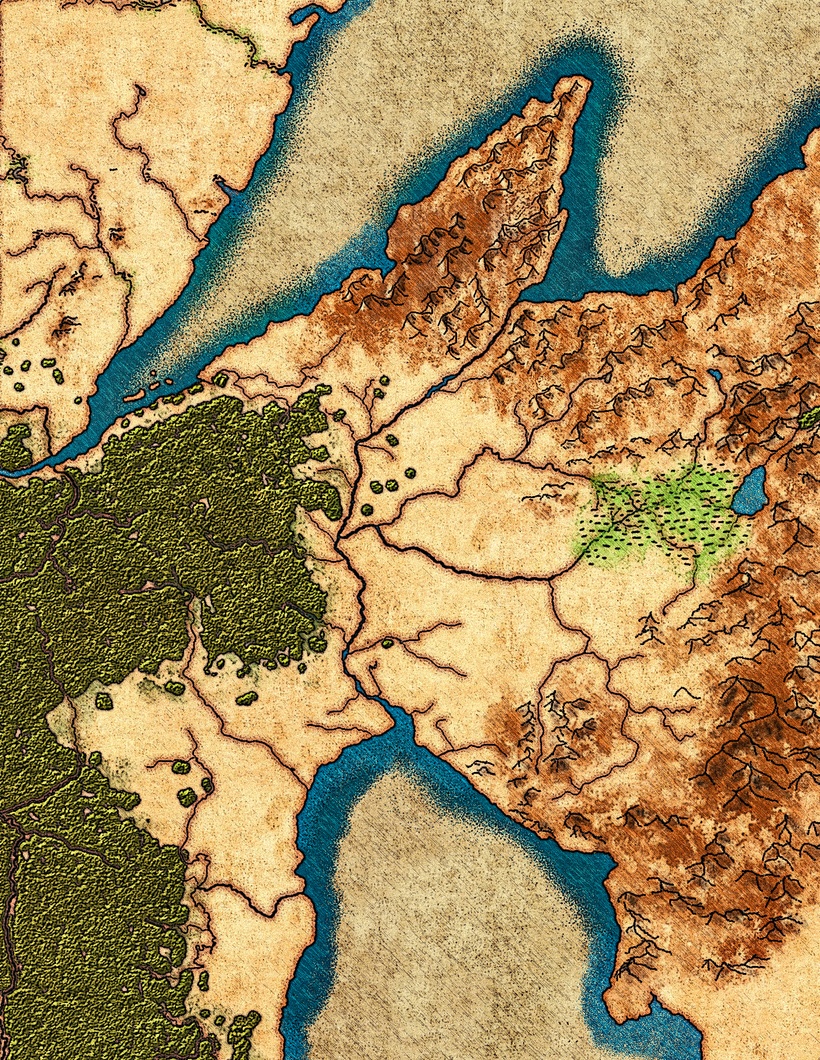 My desire to create a set of hand drawn maps as a compliment to the accurate reference maps got a test run this year, and some of you like the result and they can be useful. I'm going to keep them on my future agenda but treat them as a hobby project to work on when I feel like it and need time off regular projects.  I want to keep it in the back burner ready  to pursue if a when time  might appear for it.

Mapping the Lendore Isles is a project that seems cursed with all sorts of interruptions.  Planned to have started almost a decade ago, first it was delayed due to Len's cancer, and when he recovered we started working on it for a bit  when he relapsed and then sadly passed away last year. The other issue is that I have always wanted to use the best options possible for this, but those options have been a very moving target the last two years. I decided to try out both a "bottom up" and a "top down" approach to see which is best. Shield Lands became the bottom up test and Lendore isles the top down test project, and already early on the bottom up approach was much more productive.

I haven't abandoned the Lendore  Isles project, but the top down approach needs re-thinking, and if the bottom up approach can be made more efficient that might be my way forward for most of my Greyhawk mapping. 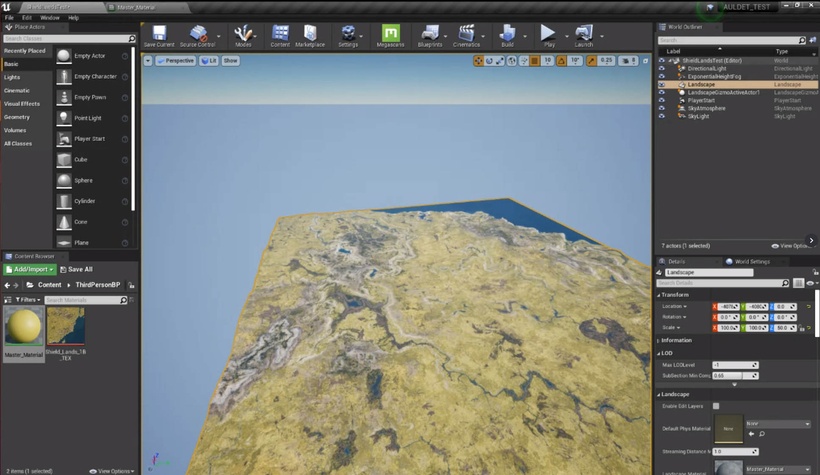 The next big leap after GIS is game engines and will be a parallel technology used for digital visualization. The first test have begun and they are very promising, but limited. The goal for initial testing are to make sure that the data I create using World Machine, Photoshop etc in my creation process can be used in Unreal, and not only work, but work well.  It is essential to future proof as much as possible to make sure that what I create now can be used, and improved on, in the future using better tools when they become available.

Thank you so much for your support it literary means a lot to me, a major part of my income and occupation and gives me an opportunity to work on pushing the boundaries of fantasy mapping, and keeping Greyhawk the best mapped setting in existence. I know that the competition ramps up but with your help we can keep Greyhawk in the lead!

My presence online have increased significantly with the Legends & Lore show together with Mike Bridges and Jay Scott, The fantasy Mapping Show with Alyssa Fade and Jay Scott, and often being a guest on Jays Sunday Gabbin shows. The latest addition to this is live streamed mapping sessions on my YouTube channel. I choose YouTube due to its support for higher resolution, streaming at 1440p which is a lot easier to work in than 1080p. I underestimated the interest in  watching me working Photoshop, so I will keep doing it on a weekly basis trying to show different aspects of my work.